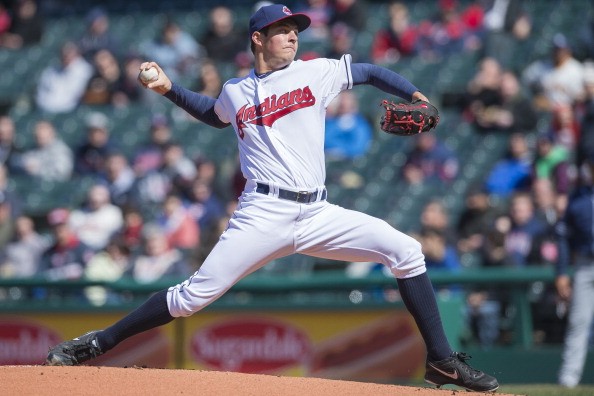 “Once more into the breach, dear friends.” Henry V, Act 3, Scene 1. Or into the lower portions of ADP rankings for starting pitchers, but why quibble when I can lead off with a Shakespeare quote, as my undergrad English degree proves useful, once again. We are getting seriously deep into drafts with the four pitchers profiled below, heading into the last rounds of most 12-14 team drafts, and seriously deep even in 15 team leagues. Most of these guys going forward would be waiver wire considerations in 10 team leagues, which given the recent injuries to Yu Darvish, Cliff Lee and Marcus Stroman, might become very useful prior to Opening Day.

Bauer was a former No. 3 draft pick, and is still only 23 years old going into the 2015 season. He has the skills to whiff a ton of batters, and he features a 94 MPH fastball. The big concern is his lack of control. In limited MLB action in 2012 and 2013, he posted amazingly awful BB/9 rates of 7.16 and 8.47 respectively. While that metric dropped significantly in 2014, over 26 game appearances, it was still an unattractive 3.53 BB/9. He is not much of a ground ball inducer, and his FIP (4.08 vs an ERA of 4.18) and strand rate 71.8%) do not indicate that he was terribly unlucky in 2014 and while he could continue to improve, he is not someone I would put forth as my SP6 or less with better options out there. Such as…

Burnett had hernia surgery just after the end of last season, and then signed with Pittsburgh for less money than his option year with the Phillies would have paid him, leaving

approximately $4 million on the table. Of course, he moves from the rebuilding Phillies to the contending Pirates, and one has to think that played a big role in his decision. If he is healthy in 2015, there is no reason to think he will not start 30+ games for Pittsburgh, and rack up some decent strikeout numbers with an ERA you can use over an entire season. Burnett needs to get his control back, but to his credit, he has not tagged his hernia with his lack of accuracy on the mound. If he can drop his BB/9 to something closer to his career average of 3.68, as opposed to his elevated 4.04 in 2014, then he worth the last rotation slot on your fantasy roster.

Anyone who has read my starting pitching articles on the site over the past few years knows I harbor a huge man-crush for Hammel. He has repaid my devotion on a few occasions, but I also realize that this ADP is reflective of his lack of success while with Oakland after shining for the Cubs in 2014. To be fair, he was a good investment for the A’s, except for his first four starts after the trade in July, when he gave up 18 earned runs over just 17 innings. He is now back on the North Side, and should slot in as the No. 3 man in the Cub rotation, which will lead to a significant inning workload. He will provide some stability on what is shaping up to be a rookie-oriented team, at least on offense. He features a good low 90s fastball, and can generate a good number of strikeouts, with an acceptable walk rate of less than three per nine innings pitched. I do not expect a return to his 2.25 BB/9 of 2014, seeing that as more of his unlikely repeatable ceiling, one that he only bettered in 2009 when with the Rockies. As a very late SP option, I expect him to be on a lot of my rosters once draft season ends.

GET YOUR COPY OF THE 2015 FANTASY ALARM BASEBALL DRAFT GUIDE

. ROOKIES, SLEEPERS, BUSTS, STRATEGIES, RANKINGS... FIND OUT HOW TO PICK UP YOUR FREE COPY.

We are now starting to push the envelope on starting pitchers who are late round picks. Eovaldi might be worth considering as a streaming option, but I try to avoid any

pitcher who projects to post an ERA exceeding 4.00. He does boast a 94.7 MPH fastball, and generates a decent number of ground balls, with a 1.46 GB/FB ratio in 2014 over just under 200 innings. It is that 6.40 K/9 last season that has me concerned, since his FIP was nearly a full run allowed below his ERA (3.44 FIP as opposed to 4.37 ERA). His BABIP of .332 indicates with the FIP that he was unlucky last year, especially coupled with a 67.1% strand rate over his 199.2 innings pitched in 2014. Eovaldi will be relied upon by his new team to throw 200 innings, and it looked as though he just ran out of gas in 2014, with September being his worst month (0-4, 5.53 ERA, 1.63 WHIP). If he can power through an entire season without running out of steam in September, then he is a good bet as a back of the fantasy rotation starter. Not that I like his team all that much and thus the win total is a bit subdued in my projections.