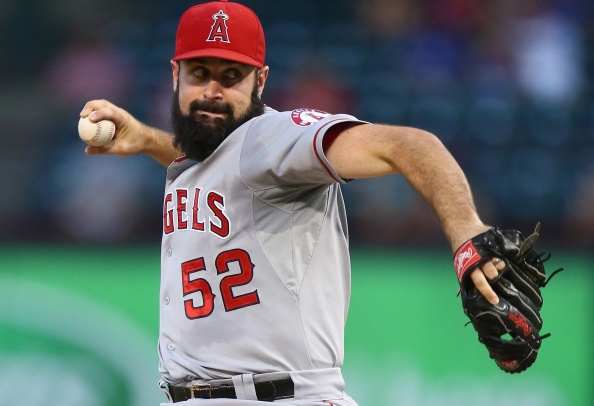 In this third installment, we are again looking at starting pitchers that you may find late in your fantasy drafts if the current ADPs remain steady. That is unlikely, especially with analysts like myself writing about the bargains that exist in drafts, especially with regard to pitching this season. Below are another four starters that you may want to consider to fill out your starting rotation on your fantasy squad.

Shoemaker was a terrific surprise addition to the Angel rotation, taking over for Hector Santiago in May and never really looking back, despite a rough period in June. His

minor league numbers did not portend his superb strikeout rate (8.21 K/9 in 20 starts/27 appearances), nor his great control, as his 5.17 K/BB ratio was off the charts, although to be fair he did better that ratio in 2013 when he posted a 5.52 K/BB over 29 starts. The low HR rate also helped him shine brightly, allowing just 0.91 long balls per nine innings. He has command of five pitches, but I also expect some regression in 2015, just because he was homer prone in his last three minor league seasons. If his stock remains in the 18th round in 12 team leagues, however, he will be a draft day steal.

Weaver is not going to give you a ton of strikeouts, just like the guy profiled about a half inch above. What he will give you is a decent set of ratio stats, and likely more wins than you expect (although wins are ephemeral, as many have noted over the years). He is a steady performer, except for the 2013 season when he missed the first seven weeks with a broken elbow. Aside from that, he is generally a lock for 200 innings and 30+ starts in a season. His home and road splits suggest that you favor starting him at home and perhaps sitting him on the road where he has struggled the past couple of seasons. His fastball velocity has been dropping ever since a high point of 90 MPH in 2010, settling in at just 86.3 MPH last season. Still, he is in every sense a pitcher and not a thrower, as witnessed by his excellent BABIP numbers over the past four seasons (.258, .246, .277, .277 respectively between 2011 and 2014). If you get sniped on Shoemaker in the 18th round, then look to grab his teammate to round out your rotation.

Paxton’s overall numbers in 2014 suffered due to missing four months with a lat strain that sidelined him in early April until the beginning of August, as well as a horrific outing against the Blue Jays in his next to last start of the season on September 22nd where he allowed eight earned runs in just 2.2 innings. Other than that, he profiled exactly like the top prospect the Mariners expected. He is an extreme ground ball pitcher, posting a 2.95 GB/FB ratio, although he should also collect his share of strikeouts while featuring a mid-90 MPH fastball and a plus curve. With his ground ball inducing propensity, and an ability to keep the ball in the park (0.36 HR/9 in 2014, but likely to adjust even with his home park helping to keep the numbers down), he should slot in at the middle of the Seattle rotation behind Felix Hernandez and Hisashi Iwakuma. I do not expect his ADP to remain this low once he shows his stuff in the spring, but even as a middle round SP, he has great value to build up your rotation. Just do not expect more than 20-25 starts and also do not be surprised if he leaves most games in the 6th inning to keep his arm fresh.

Salazar has huge upside, especially if he has overcome his home run allowing ways. He allowed an awful eight homers in his first eight starts in 2014, but after being sent

down to work on things in May, only allowed five over his last 12 starts last season. The strikeout potential is there, with a mid-90 MPH fastball, although he needs to get a handle on his control, as a 2.86 BB/9 rate is weak at best. He was unlucky to an extent in 2014, posting a 3.54 BABIP and a strand rate of 71.9%. If he can improve on both those stats, then it things may work out for him in 2015. Feeling lucky? Then maybe you want to grab the Cleveland righty for your final SP late in the draft, although as with most young pitchers (he is 25 as of January 11th), do not expect a full season of starts. I may be high on his projected innings pitched, but a lot of that has to do with an anticipation that he will continue to keep the ball within the park and develop some more control of his pitches.