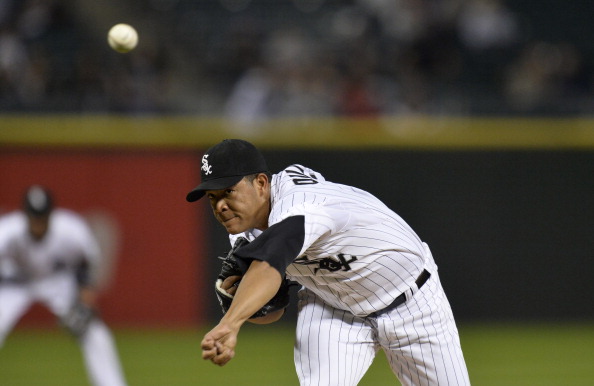 Catchers and pitchers are getting ready to report to camp in Florida and Arizona next week. Although it might seem a tad early to be thinking about fantasy baseball drafts, the experts in the industry have been drafting since January. Those draft results open up the possibility to explore just how deep pitching is this season. Surely you have heard or read that there is no need to load up on pitching early in your drafts, but is that an opinion that you can use to prosper this upcoming draft season and throughout the 2015 fantasy baseball season? Let us take a look at some starting pitchers that have been going late in drafts so far.

Please note that the projections for each of the pitchers below are my own, but are created after comparing various sources and adjusting for expected playing time, specifically, innings pitched for starting pitchers. As for the ADP numbers, I am looking at the ADP results our very own Howard Bender is compiling with his Mock Draft Army mocks.

Quintana had a superb 2014, tossing 200 innings and putting up a very nice set of ratios in a 3.32 ERA and 1.24 WHIP. He has been increasing his K/9 rate each of the past three seasons, going from 5.35 in 2012 to 7.38 in 2013 and 8.0 last season. He also produced a remarkable decrease in his HR/9 rate in 2014, dropping it to a superior 0.45 HR/9. That comes while pitching his home games in U.S. Cellular Field, not exactly a stadium favorable to pitchers nor keeping the ball inside the park. He also returned to his extreme ground ball tendencies last season, with a 1.58 GB/FB ratio, slightly better than the 1.52 he posted in 2012 and much more palatable than the 1.18 he put up in 2013. Keep in mind that his numbers from last season came about even with an inflated BABIP of .326. If his BABIP drops to league average, and he can continue to keep the ball in the park, he could be an excellent undervalued SP3 for your team.

Coming off Tommy John surgery last May, he is not expected back until mid-season. Thus, his wildly low ADP in drafts early on this year. Given that he was shaping up to be

one of the top pitchers in all of baseball before he had to go under the knife, he would be a great player to stash if you are in a league with deeper rosters and you can live with just half a season worth of stats from a later round SP. Just think of him as a high quality middle reliever, and the less than 100 innings will not seem so awful. In the 51.2 innings he was able to toss in 2014, he demonstrated just how good he could be, improving his ground ball rate from 45.1% to 48.8%, dropping his walk rate from 8.5% to 6.3% and increasing his strikeout rate from 27.5% to 34.2%. All of those numbers make him well worth a late round gamble.

GET YOUR COPY OF THE 2015 FANTASY ALARM BASEBALL DRAFT GUIDE AND DOMINATE. CLICK ON THE LINK TO FIND OUT HOW TO PICK UP YOUR COPY... FOR FREE.

Hutchison came back with a bang in 2014, after spending all of 2013 rehabbing from Tommy John surgery, throwing 35.1 innings at three minor league levels. His 2014 ERA was an ugly 4.48, but that came about due to a handful of terrible outings. Hutchison collects nearly a strikeout per inning but needs to work on his control, yielding nearly 3 walks per nine innings in 2014. Note that his FIP was more than half a run less than his ERA (3.91 vs 4.48). That coupled with a decent BABIP of .308 and a low strand rate (67.1%) indicate that with some luck, he could push his ERA below 4.00, especially if my projection for his WHIP is close to accurate. His home park is a concern, but his home and road splits evened out over the course of 2014, so it is not that huge of a concern when targeting him as your SP3/4 in the later rounds of your draft.

The Houston pitcher had a true breakout season in 2014, posting a sub-3 (2.93) ERA after not showing any such ability in this prior two seasons with the Astros (2012 ERA 5.27, 2013 ERA 5.15). That dramatic improvement can be pinned on improved control (2.16 BB/9) and keeping the ball in the stadium, as his HR/9 dropped to an excellent 0.50 last season, down from 1.48 and 1.17 in 2012 and 2013 respectively. Another positive factor was that he became an extreme ground ball inducing pitcher, getting hitters to drive the ball into the dirt as opposed to elevating it at a 3.63 pace. Could 2014 be an outlier season for 27 year old southpaw? Certainly, but his improvements in several metrics tells me that he has figured out how to pitch. He will never rack up huge strikeout numbers with an 89.7 mph fastball, but his control and ground ball tendencies make him an effective starter, in both the MLB and fantasy.

Continue to peruse these articles as we try to uncover some late round gems for you to target in your drafts, and assist your efforts to build a formidable starting rotation without sacrificing offense to do so. If you have any questions about starting pitching or fantasy baseball, feel free to contact me at ia@fantasyalarm.com.