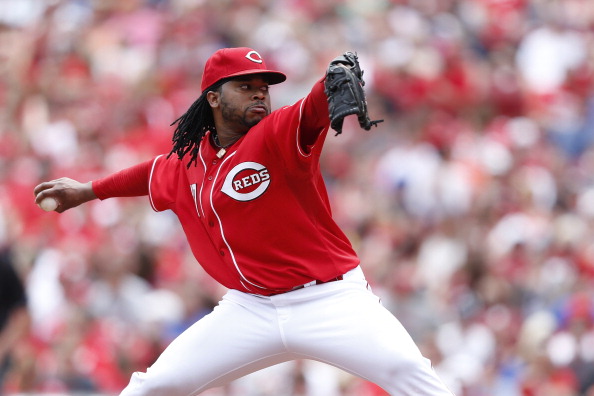 Are you letting your attention drift from fantasy baseball to your football pursuits? Well, stop it. This is the time to seize

opportunity while your opponents ponder over the ADPs of running backs and wide receivers, and let you swoop in and pick up some pitching help for the stretch run.

The top tier is a little wobbly this week. Not to say I wouldn't start any of these pitchers in both their scheduled appearances, it's just that as we head into the end of August, I would be happier if these SPs were producing with same consistency they showed earlier this season (looking at you, Mr. Porcello). Even given those qualifications, I would go for any of these pitchers this week, no matter the opponent or venue, and accept the results.

Some good options this week in the middle tier, especially the top sub-tier, which opens with Tillman and wraps up with McCarthy. Tillman gives his owners the sought after strikeout capability, having put up a very nice 40:6 K/BB ratio over his past seven starts covering 46.1 innings. That he threw six QS over those seven starts helps to cement his as the leader of the middle tier this scoring period. Duffy is another pitcher having a good run currently, although he doesn't pitch as deep into games as does Tillman and the strikeout numbers are not as consistent. Odorizzi has a nice three game streak going, since he was roughed up at the beginning of August by the Angels. He has accumulated 23 Ks over his last 19.2 innings, and he has been good at limiting both hits and free passes. He has really come into his own this season and should be going higher in drafts next season. Shoemaker continues to deny expectations based on his sub-par minor league results, as he deals for the Angels. In his last nine starts, he has posted a 2.54 ERA, 0.93 WHIP and is very nearly striking out a batter per inning. Maybe it is just a one season burst of goodness, but I would suggest you take advantage of his performance while it lasts. Elias is prolly going to be shut down at some point, or have his innings per start limited. If you can accept a five inning SP, who provides nice strikeout numbers, then Elias is worth an add. Stults has racked up wins in three of his last four starts, and has done it by limiting hits and for the most part harnessing his control. He also has been a decent strikeout option recently.  Chen continues to be an unspectacular pitching option, but also keeps on providing wins for his owners. He has also been striking out a batter per inning of late. With the Orioles in the playoff mix, he is a fine SP option going forward. McCarthy has prospered since he moved to the Yankees, collecting strikeouts, showing excellent control and has six QS over his nine starts for the Yankees.

The second sub-tier begins with Quintana and goes down through Pineda. Quintana has yielded four earned runs in each of his past two starts, a disturbing trend after allowing two or less earned runs in nine out of ten games prior to that, and the sole exception was still a QS. Facing division foes this week, I look for him to bounce back.  Liriano was hit hard by the Braves at home in his last start, but prior to that, had been on a five game QS streak, where he rolled up 34 Ks over 33 innings. Peavy finally strung together a couple victories, as he allowed only three earned runs over his past 14 innings, while racking up 11 strikeouts (eight in his last outing versus the Cubs). I am not recommending you go all in on him, but if he has harnessed his control and figured out how to miss bats again, then he could become useful. Wood can be great, but then again, he also has the ability to be truly mediocre or even awful. I don't really like his match ups this week, and would suggest avoiding him at either Cincinnati or St. Louis. Pineda has been effective since coming back from the DL, giving up two and one earned runs in his starts, although the strikeouts aren't exactly pouring in. He is showing great control, and despite the lack of Ks, he is a decent add just based on his potential.

Where do you look for the most in depth NFL offensive line reports? The 2014 Fantasy Alarm Draft Guide has every team’s

offensive line and individual offensive linemen sorted and graded for your research pleasure. Get it FREE with a new DraftKings account!!

The final sub-tier starts with Feldman and is complete with House. Feldman was the winning pitcher over the Yankees in his last start, but it is his potential to give up a boatload of runs without warning. His home/away splits are pretty much even, so this week, I don't like his initial start against the A's, but would consider using him at home against the Rangers. Samardzija has struggled some since he was traded to the A's, I mentioned mediocrity earlier in discussing his former teammate Wood, and the Oakland experience has been just that for Samardzija. Until he can string together a couple of decent outings, I would let him sit on the bench. Keuchel, another Astro SP that occasionally just cannot miss bats. He has been more dependable than Feldman of late, but the fact that the Rangers roughed him up in his worst start out of the past seven appearances makes me hesitate to use him in any of his starts this week. De La Rosa goes up and down with his strikeout production, and his team is struggling, so he is not exactly a top-notch SP option going forward. He's away from Coors for the next two starts, but the second is at Arizona, and that could be nasty. Plus his home/away splits favor him at home. Go figure  Nelson was coming off a five consecutive QS streak, before allowing four earned runs to the Blue Jays. His potential is huge, but he isn't a top-level strikeout guy yet. I am buying in, but he will come at a slight discount next season, so keep him on your radar. House wraps up the final sub-tier. He provides some strikeout potential, but has not been able to pitch deep in games, so that drops his value for me. He is facing division opponents this week, so that gives him some additional value, but not that much.

This is a large tier this scoring period, and as I assembled it, I was disappointed with the top two members, especially. Hammel is in danger of losing his rotation spot soon, and Burnett is already talking about retirement with over a month to go in the season. I would have to be in a super deep league to trust any of these guys, and fortunately, I don't.