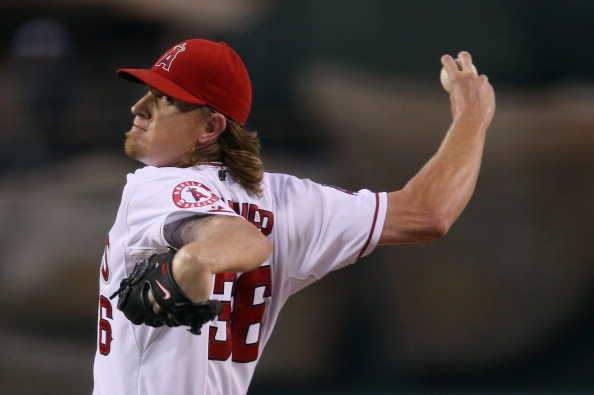 We are heading up to the trade deadline at the end of July, so realize that some of these two-start options may end up in different circumstances in Week 18. I would expect any movement would involve those in the middle tier, so be wary of changes to your well laid plans.

As with every week, my advice is to wind these guys up and let them go, no matter the opponent or venue. Finally had to admit that Weaver deserves a top-tier roost, although he may still show me that he is not someone that I would trust week in, week out.

As I do every week, these pitchers are sorted in order of how I would grab them off the wire if they were available.

Our first sub-tier begins with Stroman and runs down to Harang. Stroman has been dominant with only one hiccup in his last six outings, and one hit the BoSox for seven innings in his last start. A case could easily be made for him to join the top tier, and another strong two starts will find him seated there. He's owned in less than half of leagues right now, so go out and snag him if your league mates have been sleeping at the switch. Odorizzi gets two home starts this week, and based on his splits, that is excellent news. He has been dealing for two months now, and while he could have better control, the strikeout rate is superb. Alvarez is another pitcher who likes his home park, and while he doesn't provide anything exciting in terms of Ks, his control has been excellent and if he can keep inducing hitters to drive the ball into the ground (2.61 GB/FB ratio in 2014), he will continue to be effective. Despite racking up 11 strikeouts in his last outing, De La Rosa is below league average in K rate. He does have four consecutive QS in his four July starts, so he is again useful after stinking it up in June. While the Rockies are downplaying his trade availability, he would benefit from a move to a new home park in the right deal. Phelps keeps on plugging along, having allowed two or one earned runs in each of his last five starts. His strikeout rate is only average, and he does allow more walks than I would prefer, although he has exhibited better control in his last two starts, so there is hope. Despite allowing only six earned runs over the 26.2 IP that he has tossed in July, Quintana has been without a decision over the past four starts. With good control and an 8.1 K/9 rate, his fortunes will balance out. Santana has thrown five QS in six of his last starts, With decent K numbers and ground ball tendencies, I really like him at home and on the road against the less than intimidating Padres this week. Harang has been extremely effective over his past six starts, posting a 2.25 ERA over 41 innings. His strikeouts are not great (7.2/9), and his WHIP screams regression, but facing the Padres in San Diego at the end of the week bodes well for continued success, although his first start this period is not so favorable with the Braves on the road in LA to face the Dodgers.

Leading off in the second sub-tier, Bauer has been inefficient when he takes the mound this season, which means he doesn't pitch past the sixth inning in most games. He does provide good strikeout potential, with a 8.7 K/9 rate this season, although his walk rate is a big part of his reason for shortened starts. He does have two winnable starts at home this week, where he has been much better than on the road. Burnett may be moving to another team, and that would prolly help him rack up some more wins. He has average strikeout rates, and his control is spotty to weak. For the most part, however, he pitches into the seventh inning and offers his owners a QS more often than not. Chavez has a couple of good starts this week, and his last outing gives us hope that he is back on track. He held the Astros to two earned runs on four hits while striking out seven, and he gets to face that team again on the upcoming Monday. I also like his chances in his second start at home against the Royals, as his splits favor him in the Coliseum. Lohse has quietly become the Milwaukee ace, with 11 wins and a tasty 3.07 ERA and 1.09 WHIP over 21 starts this season. His strikeouts are hit and miss, but the control is steady. Even with his two road starts, he is an attractive option this week.

The third sub-tier begins with Bailey and runs down through Colon. Bailey continues to live up to his name, having given up another three in his last appearance against the Brewers. Couple that wih his inflated walk rate, and he is not a dependable option, but more of a match up starter. This week, he gets the Diamondbacks at home and then the Marlins on the road, so if I were looking for a decent option to plug in for two starts, he would be there on the list, just not at the top of it. Anderson has been up and down with his wins this year, and has tossed a couple of back to back QS, and pitching on the road is in his favor even if his first start is at Cincy. The second against the Pirates is one I might not be willing to risk if I needed a good start to wind up the week. The kid needs to work on his control to offset his average strikeout rate, as well. In limited starts this season, Worley has been a dependable option, posting a 3.10 ERA and 1.18 WHIP over seven appearance (six starts). Good control offsets his below average K rate, and he does keep the ball in the park for the most part. Liriano is not excelling as he did in 2013, but most analysts saw that as a likely scenario. He has slowly been ramping up his innings after coming off the DL in July, and his control is improving which if he starts making bats miss his pitches again in an expected fashion, he becomes a valuable pitching asset. Tillman is not an exciting pitching option, but he does get the job done, having pitched four QS in his last four starts. The strikeout rate is poor, as is his control on the season, but that latter problem seems to be coming around. The good news is he pitches at home both of the starts he has this upcoming week, where he has been more efficient. Colon hasn't been tremendously consistent over the past several appearances, but he has a 2.98 ERA and a 64:14 K/BB ratio over his past 12 starts (84.2 innings). Right now it is hit and miss with the big fellow, so even pitching at home I might want to go a different direction this week.

Our final sub-tier leads off with Zimmermann and wraps up with Buchholz. I want to use Zimmermann, and this week may be a time to put that plan into action. His bicep issue appears behind him, and facing the Marlins in Miami and the Phillies at home is a good situation. It is only because of his past two outings where he was shaky that pushes him this far down the middle tier. Dickey has had a couple of poor starts in a row, although most of the damage in his most recent start against the Red Sox occurred in the first inning, after which he settled down. He has been inconsistent this season, so while I like his chances better away from his home park, I still don't fully trust him. Kennedy had been pitching better in July, at least until his last two starts where he yielded seven earned runs in 11 innings, although he did pick up the victory in his last outing. He walks too many to be entirely successful, although he does overcome a lot of problems with his excellent strikeout rate. A trade is still possible for him, and his value going forward could take a significant jump if the right team snags him. Facing the Braves twice should be good for elevated strikeout numbers this period. Sanchez was at one point the only decent Tiger starter, but that situation has reversed itself, with him having given up five and then four earned runs in his last two appearances, although one was a win. He still has excellent control, but the Ks have been inconsistent, so that lessens his value. For whatever reason, he has been better on the road this year, so his two home starts are not necessarily a selling point this period. Leake has become a risky fantasy SP, posting a 4.83 ERA in July and allowing eight or more hits in each of his five starts this month. He will continue to take the ball every fifth day, but his status as a usable starting pitcher is not secure until he limits the hits. Buchholz has given up four earned runs in four of his last six starts, although the other two starts were admittedly gems. The strikeouts are extraordinarily inconsistent, and his control is below average, too. I hesitated before keeping him in this tier, but relented based on the two good starts, and the fact that he faces division foes at home in both of his Week 18 starts. Even so, he is a last ditch option for me.

Jackson, Cahill, Peacock, Feldman, Eovaldi and Gibson are just too inconsistent for me to trust at this point. Flande and Wada could move up to middle tier status, but I need to see more from them to make that decision. In any event, you must be terribly desperate to even consider using one of these pitchers in one start, let alone two. Just stay away.

Also, remember that if you create a new account RIGHT now over at DraftKings ($10 minimum) using our link here, you will receive a FREE 2014 Fantasy Alarm Fantasy Football Draft Guide, NFL Assistant GM In-Season Package and our COMPLETE DFS tools for this coming fantasy football season.