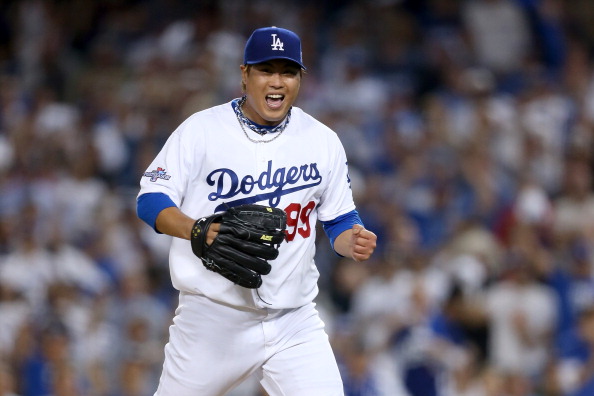 If you happen to be looking for a two-start pitcher or twelve for this scoring period, you are in luck. It will take a bit more verbiage than usual to cover the middle tier, so be patient, or practice your speed reading skills. There are not so many pitchers I wouldn't consider this week, so perusing the final tier should be a breeze.

As always, I would not hesitate to use any of these pitchers in both their starts, opponent and venue are disregarded in making the lineup decision. Not so sure it is pleasant to welcome back Weaver to the top rank, as I just don't usually regard him as a top notch starter, for whatever reason, but it is nice to see Verlander pitching close to his usual self again.

The top sub-tier consists of Iwakuma and Ross. Iwakuma bounced back after a pair of clunkers where he allowed five earned runs per game. I like him this week with two home games. Ross is quietly becoming a top-tier pitcher. Coming off a complete game shutout over Cincy, he has two away games which lessen his desirability somewhat and you do have to worry about his ability to win given the poor state of the Padre offense. If you get credit for QS, though, you have an excellent four category SP in Ross.

The second sub-tier ends with Leake, and begins with Tillman. Tillman has been getting lucky, as his strikeouts have plummeted and the walk rate is increasing. He continues to pitch out of trouble, however, and that says something about his skills, so I still trust him...for now. Kennedy is a good pitcher, with strikeout potential, and while I would prefer to use my Padre pitchers at Petco, I like his track record against the Rockies and pitching in LA isn't horrible, although he does give get hit by the Dodgers. Vargas is nothing exciting, but steady sure performance has its place in baseball, and for the most part, Vargas will pitch well enough to be usable most starts. I feel better about using him on the road against the Rays than at home versus the Tigers. Odorizzi has been turning it on for Tampa Bay, but ya gotta wish he would pitch deeper more consistently in games. Still, the strikeouts and generally good control are nice. Koehler is doing what I want to see from a SP, striking out hitters and limiting walks. Over his three consecutive QS, his K/BB ratio is 21:4. Against Arizona and the Mets, I really like his chances to succeed. Young keeps surprising me, occasionally tossing a strikeout per inning game, limiting the walks and keeping his team in the game by not giving up many hits. With two home games on tap, I would grab him as a streaming option this week. Morton has been a favorite of mine since draft day, serving as a good source of Ks and QS, when his curve is working. It has been working save for an aberration mid-June at Wrigley Field, and I will keep rolling him out there until he proves me wrong. Danks is another SP that had one blow up in June, but has generally been an excellent source of QS on a consistent basis. More strikeouts would be welcome, but that is just not his game, except for the occasional surprise like in his last start where he cut down 10 Angels on strikes. Two road games are worrisome, as his home/away splits favor home cooking.  Worley has thrown four consecutive QS since he was activated, and he is putting up great peripherals as well. He is a solid and dependable mid rotation starter, although both starts are troubling, as he faces the Cards and Reds on the road this period.  Vogelsong has rebounded from his mid-June troubles, pitching a couple of QS with a 15:1 K/BB during those two outings. Taking on Oakland at the Coliseum and the Diamondbacks at home are both winnable games. Leake is yet another dependable SP, that can give you some nice K numbers in the right situation. Both his starts are good options, even at home, since he is an extreme ground ball pitcher which plays well in Cincy.

Martinez opens the third sub-tier, which runs down through Kendrick. Martinez is proving to be a fine addition to the Cardinal rotation, although his pitch limitation also limits his utility for fantasy purposes presently. He is posting good K numbers in his short starts, and with Jaime Garcia going to the DL, his spot in the rotation is secure for now. Skaggs has good outings followed by not so good ones, but I do like him at home vs Toronto, and facing Texas is not all that frightening, even in Arlington. Chen is nothing exciting, but is generally good for six or seven innings of low scoring baseball, although the strikeout numbers are under whelming. He faces a couple of tough opponents on the mound this period, but then again, he is generally a decent start. deGrom has been pitching well, and despite the fact that he is backed by the Mets offense, he is still a decent source for Ks and QS, if not wins.  Gray, like any young pitcher, has his ups and downs, but fortunately for his owners, the ups outnumber the downs.The control could be better, but the Ks are acceptable, and facing the Giants at home is a bonus, and facing Seattle on the road is not a terrible way to wrap up the week. Strasburg rally shouldn't be this low in the tier, but his recent inconsistency is the problem. He tends to toss QS most appearances, and is generally an excellent source of Ks, but he is a much better option at home than on the road, so his second start carries some risk. Shields may have been signed to be the Royals ace, but since late May, he hasn't pitched like one. You know the skills are there, and have to be patient for when they resurface, but for now, he's a match up pitcher. Kendrick has his moments, and can provide some need strikeouts for a desperate owner, but his two games this week don't scream pick up to me, but he has better prospects than the rest of this tier for the most part.

The final sub-tier has 13 inhabitants, beginning with Corriea and ending with Happ. Correia's lack of strikeouts outweigh his occasional good starts for me. Matzek has more strikeout potential, but in an admittedly small sample size, his prospects at Coors Field don't hold out much hope this week. Jackson is another decent K source, but pitching for the Cubs hurts his value, as does his tendency to put runners on base too frequently. Estrada recently saved his rotation slot with a couple of quality starts, but his strikeouts have been sporadic and that was why you drafted him, so his value continues to plummet. Cosart is regressing, in terms of strikeouts but he still has been pitching well until his last start where he yielded six earned runs with four walks. His match ups this period are not bad, and if you believe in him more than I do, go ahead and plug him into your rotation. Still, until the K rate goes back up, he is not a choice I would make. Minor and Peralta are both pitching OK, but both pitchers' last two starts have shown kinks in the armor. The strikeouts are still there, but the earned runs are a problem for a fantasy owner. Chavez has a couple of match ups that are not superb by any means, and with a tendency to give up free passes and earned runs of late, I am avoiding him this period. Nuno has had one good outing out of his last four, and while his most recent start was alright, he still allowed too many base runners to be successful. He is a better road pitcher so far this season, so if desperate, this would be a good week to use him. Buchholz was superb in his last outing against the White Sox, but his recent inconsistency makes me avoid him at this point. If he puts together several, not one or two, excellent starts, then he can rise up the ranks, but not before. Bauer had problems with control that sent him to the minors. While he has fixed that issue, he gives up way too many hits to be successful in the majors. He has been decent recently, but I just am not buying in. Wood, like Jackson, suffers from fronting the Cubs, but unlike Jackson, he doesn't give you the hope of high strikeout totals in the occasional game, plus the inflated peripherals make him a risky SP to start. Happ has conquered his control problems this season, for the most part, and is amassing some respectable strikeout numbers, but he also doesn't fool hitters as evidenced by the hits he allows. Pitching on the road for two contests just makes him too risky to trust this week.