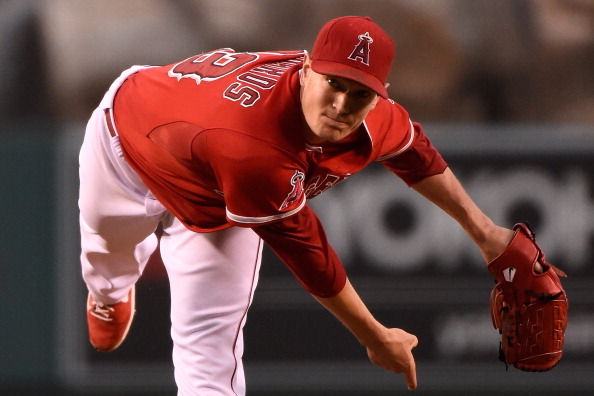 Unlike last week, there are a whole bushel full of starting pitchers I want no part of this week, either as two-start options or for streaming purposes, as evidenced by the bloated third tier. Fortunately, we do have significant depth in the two-start category, and it seems wise to just get to the analysis, so let's do that.

I would have no hesitation about starting any of these seven pitchers in either or both of their scheduled starts. I am not especially fond of the uptrend in walks that Richards is demonstrating, but I have to confess that I missed the boat on him entirely and am missing out on some excellent SP numbers as a result.

The first of the three sub-tiers in this group begins with Alvarez and runs through Weaver. Alvarez has been a superb SP option, having yielded only four earned runs in his last seven starts, and limiting free passes while also providing modest yet consistent strikeouts. Arrieta has been just as a much a superstar SP, aside from a stumble against the Giants on May 27. Plus, he is racking up Ks at a rate better than a strikeout per inning. Porcello secured his tenth win on the season Thursday by twirling a complete game shutout, and while he is still a predominantly a ground ball pitcher, he does provide a handful of strikeouts per start. Hahn should see his ownership percentage rise if he continues to win while generating strikeouts at a rate not expected of a ground ball inducer. He does pitch at Petco for his home starts, but unfortunately, that also means his offense consists of Padre hitters. Take the good with the bad. Wood and Latos are welcome additions to their team's rotation, with Latos coming back from an injury and Wood returning from a bullpen stint. Both look to stay in their current starting role for the foreseeable future, and while I like Wood's matchups slightly better, I would not hesitate to start Latos against the Brewers, either. Cosart has been very effective, racking up four consecutive wins, but while he can occasionally give you a good number of Ks, that should not be why you use him. Instead. look for a QS or W when he takes the mound. Weaver is good, not great, and to his credit, is coming off two strong starts. His control is back, but the strikeouts are just mediocre.

The middle sub-tier starts with Mills, who despite not having a big sample size, has been added to the Oakland rotation, which is a good sign in my book. The Athletics saw something they liked about the lefty and thus acquired him from the Brewers to add to their rotation and according to his manager, he is not leaving there soon. The sub-tier continues with Burnett and ends with Duffy. Burnett has shaken off his doldrums, and is pitching deeper into games, providing a consistent source of QS and the occasional standout strikeout performance. McHugh continues to impress in the Astro rotation, racking up the Ks but also, alas, allowing too many free passes to opposing hitters. If he can harness his control, he becomes a much more valuable SP. Duffy has been an effective pitcher for three starts now. This is a tendency with him, though, as he is prone to bouts of wildness, as well as useful bouts of good strikeout numbers. He has been better on the road lately, so this is a good week to take him out for a spin.

The bottom sub-tier is not inspiring, but does have some decent options. Archer, Haren and Wheeler have all demonstrated the talent to succeed, but not lately. None have superb matchups this week, so use them with caution. Heck, use all the bottom sub-tier with caution. Miley recently said he is putting too much pressure on himself, which doesn't sound good for his immediate future success. He does have some attraction as strikeout source, but the peripherals are deadly. There is nothing wrong with Kuroda, he is just pitching like himself. Without a strong team backing him, though, he is just not exciting. This week's matchups are promising, though. I know Lincecum just no-hit the Padres, but put this in perspective: it was the Padres lineup that he held hitless. Aside from his gem on Wednesday last, he has been up and down and I am not willing to gamble on the up days to accept the down days. Noesi has corralled his control issues, but that apparently comes at the cost of not striking out batters with regularity. With Jimenez, if he is striking out hitters, he is on his game and usable. Unfortunately, he frequently is just too wild and hands out walks in bunches, making him a true gamble of a pitcher. Plus, I still question his decision to sign with Baltimore and agree to pitch in a park that does nothing to aid him.

I wouldn't use any of these pitchers, two starts or not, on my teams. Either because of a lack of track record (Pino, Flande), or more detrimentally, a case of inconsistency, none of them inspire me to roll them out for a start. If you are extraordinarily desperate for a two-start option; then the top five could be worth a shot, but only if you cannot get by otherwise.