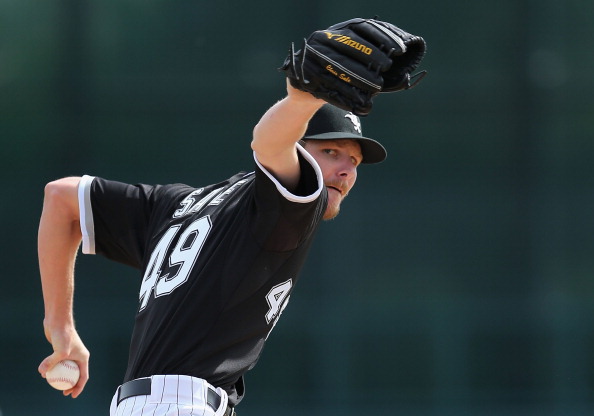 The mid point of June has come and gone, and we prepare to settle into summer, the time when baseball rules our collective sports minds, at least once the World Cup is done and before football starts. Not too many options in either of the extreme tiers this week, but still a lot of middle tier pitchers to discuss, so scroll down and take a look.

Hudson is the only member of this tier I have some concerns about, but given his production all season long, he still deserves a spot here. Do not concern yourself with matchup or venue, start these guys for both their appearances and accept the results.

The first sub-tier is loaded, running all the way down through Colon. Archer, Gallardo and Chen are all coming off good stretches with multiple QS appearances and while the strikeouts are inconsistent, overall the results are valuable, especially in a two start week. Cashner bounced back from a sub-par start, but it would be nice if he could up the K numbers. Especially like his second start at home against the Diamondbacks this week. Cobb is coming off two strong starts, with excellent K results and having allowed only one earned run over 13.1 IP. The prior up and down starts loom as caution to just automatically start him, however, and with the Rays struggling to find wins, his value is just a bit diminished. Heaney looked like an ace in his first start in the majors, but let's see how he fares in his second and third appearances before going ga-ga over the youngster. Still, his first start vs Philly holds promise, even if he does have to face Oakland in his second start this period, not an easy task this season. Guthrie's ownership percentage should be rising after two consecutive nine K outings, but he should still be available in loads of leagues and I would grab him while the Royals are on a roll. Whitley continues to shine for the surging Yankees, although he does face a couple of AL East rivals this upcoming period. Still, he is demonstrating excellent command, and limiting earned runs while pitching deeper into games, so while he is still not owned in more than half of fantasy leagues, now is the time to pounce and add him to your rotation. The final five: Locke, Smyly, Gibson, Stroman and Colon are all well worth using this scoring period, with all of them capable of providing QS and decent peripherals, although the strikeout totals are inconsistent for all of them.

My middle sub-tier starts with Miller and includes everyone through Garza. Miller has generally recovered from his earlier travails, but still is allowing too many runs to be effective game in, game out. Pitching on the road is not necessarily a great portent of good fortune, either. Although a regression is still expected for Buehrle, he continues to pitch very well, generally limiting walks and keeping runners from crossing the plate. Simon continues to be a reliable starter overall, but isn't racking up the Ks his owners want. He does limit hits and walks, so the home runs he continues to allow don't hurt him quite so much as would be expected. De la Rosa is a concern with his back issues, and that could explain his recent mediocre results, but he is scheduled to go twice this week, albeit against sturdy opponents. Voloquez was hammered for eight earned runs by Cincy his last start, but I do like his two matchups, and he was pitching well prior to the loss to the Reds, so I would take a chance on him if I needed a two-start pitcher this week. Eovaldi is coming off two bad starts, but I do see him rebounding against the Phillies, who he has handled in the past. At home against Oakland is not quite as tempting. Bailey has been disappointing this season, but if I had to start him, then facing the Cubs on Tuesday holds some promise, and pitching at San Fran isn't a horrible option, either. Samardzija continues to rack up the stirkeouts, and pitched a beauty of a game vs the Marlins his last time out, although he has been giving up too many earned runs lately to be a no-doubt start. Quintana and Masterson are both inconsistent, although Quintana is the more dependable SP of the two. Masterson's inability to handle left handers is his biggest issue, but I like his matchups this week better than Quintana, despite liking Quintana's overall performance better. Until Gonzalez shows that his shoulder isn't affecting his performance, and the results on the mound improve, he is just too risky to roll out there except in a good matchup, such as facing the Cubs at the end of the week. Garza's lack of Ks is an issue for me, although he is effective at limiting runs. Pitching at home does give hope for good results, though.

The bottom sub-tier consists of pitchers that could provide some decent stats, and may even pitch well, but you are taking a risk if you want to use them twice this week. Cain has been struggling all season, walking too many and not generating enough whiffs. I might take a chance on him against the Padres, but would avoid his second start at home vs Cincy. Harang has been going through regression since an excellent April, The numbers may look good on the surface, but the lack of Ks and rising WHIP are signs of a mediocre innings eater at best. Feldman isn't horrible as a SP, he just isn't good, despite limiting the earned runs. I would start him over Harang in their faceoff Tuesday, but that is faint praise. Chacin, Santiago and Buchanan are all too risky, equally adept at allowing a boatload of earned runs as there are at tossing a QS. I would avoid them all, unless desperate measure are necessary.

Only two pitchers I am totally avoiding this week. Lewis could move up, if he could just demonstrate an ability to pitch deeper into games. Oh, and give up less earned runs. Hernandez is not a terrible option, just a SP that cannot effectively pitch into the sixth inning or keep runners from crossing the plate.