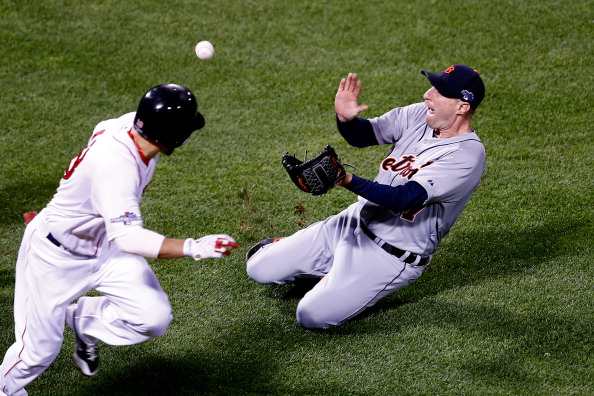 It is now Week 12 according to my calculations, and while there is a notable absence from the top tier, there are a whole lotta options in the middle tier to consider for your fantasy use this week. Let's get right to it, shall we?

I say it every week, wind these guys up and let them go. The only one I hesitated about was Lester, but despite his recent struggles, I still trust him, unlike Verlander who has sunk to the bottom of the second tier. Fret not about match up opponent or venue, just put them in your lineup and let them pitch away.

UPDATE: Wainwright is being skipped on Monday, June 16, but is expected to pitch on Saturday, June 21.

Breaking down the middle tier, I see the first sub-tier as running from Hughes to Chen. Hughes rebounded from the blow up against Houston by pitching seven innings against the Jays and not allowing an earned run and racking up nine Ks. Danks is another starter that I am willing to get behind, especially after his correction of a mechanical flaw. Limiting long balls is another plus for him this season. Milone, Pomeranz and Roark have all been pitching well for some time now, although it would be nice if they could provide a steady source of strikeouts instead of just an occasional burst. Ryu is coming off a loss, but has a couple good match ups this week, so he is still in good graces.The final four of the top sub-tier are all solid SP options this period, even with Hammel's last start (11 hits, four earned runs in 5.0 IP) and the Ks are moderately dependable for all four pitchers.

The second sub-tier consists of those pitchers from Vargas until we reach Weaver. Vargas has put together a solid 4 start run, and the downward trend in walks with reasonable K rate makes him usable. Tomlin's excellent control continues to carry him, as do his decent whiff rates per game. Stroman is looking good, with a 17:2 K/BB ratio over 18 innings in his three starts, and doesn't look out of place on the mound despite his youth. His ownership percentage is growing weekly, so act fast if he is still available in your league. Weaver is iffy as far as a dependable starter, but when he is on, he is well worth starting. Problem is, who can tell when he will be on his game?

Sub-tier number three begins with Peralta and stops once we reach Koehler. Peralta has fallen off a tad recently, but picked things up in his last start in New York against the Mets. Facing the Diamondbacks is not a bad start to the week, and with Colorado struggling, the end of the week projects for a decent start, too. Baurer has shown better control over his last three starts, but still allows too many runs to be a dependable fantasy option on a regular basis. The lone K in his last start has to be an aberration, though.  Lohse bounced back from an atrocious eight earned run start against Pittsburgh with an eight inning one run (unearned) appearance in New York vs the Mets, and is a decent option on the road facing Arizona and the Rockies, like his teammate Peralta. Ross will look to hold the Mariners and Dodgers to minimal earned runs and maintain his sub-3 ERA, but those match ups are not exactly great, so be cautious. Miley can toss the occasional gem, but this is not the week I'd be looking for a stellar set of performances, yet he can still give you good K results. deGrom has fallen off a bit, yielding three, four and three earned run over a three game stretch, which still isn't that shabby, but aside from an 11 K surprise against Philly, don't expect more than a few whiffs. Koehler rounds out the sub-tier, and with two home games, I like him, but temper my enthusiasm with the fear of limited innings and too many earned runs.

The final group consists of pitchers I just consider too inconsistent to trust at this point given their recent performances. I sort of expect the ups and downs from Ventura, Odorizzi, de la Rosa, Elias and Matzek, given their youth. Bedard, Kendrick and Young were all pitchers you figured had a regression in them. I am most disappointed with McCarthy, Santana, and especially Verlander. There is hope all three of these guys bounce back and quickly, and I am encouraged by Verlander's recent press conferences. Until they show me some positive results, however, they will be benched.

None of these pitchers will grace my roster, absent a huge turnaround in the near future. Lewis just isn't pitching deep enough to trust, and while Cumpton may demonstrate enough to move up a tier soon, I am not willing to put my fantasy team's fate in his hands as of yet.