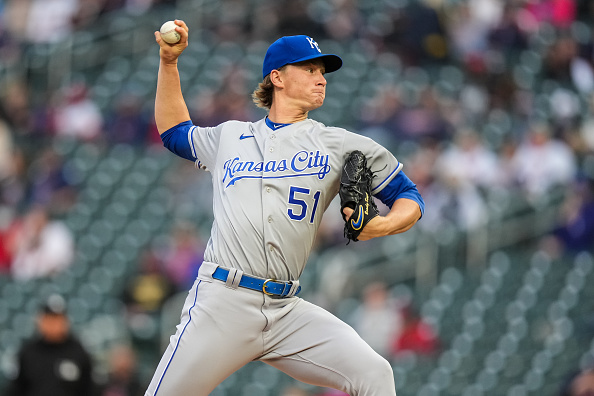 A full dozen top-tier options that you can plug in and forget about this week, although the middle tier is not quite so full or promising once we get past the top half. The bottom group has one, perhaps two streaming options for a single start, otherwise avoid them this scoring period.

These 12 arms are the ones to bank on in Week 7. It is nice to see Bumgarner’s reemergence as a top-notch SP option, and while Alex Wood continues to take the ball, use his skills to bolster your team stats. Gibson has cemented himself as the Rangers’ ace, and while he is on the road for both his starts this coming week, both he and his team play well away from Texas.

Singer leads off the middle-tier, and he was just a single out away from collecting his third Quality Start (QS) of this season in his last outing, a non-decision against the visiting Cleveland team. He is off to take the mound on the road for both his Week 7 starts, but has pitched well away from KC. He should pick up some Ks facing the Tigers, perhaps improving his strikeout per inning pace given the free-swinging ways of Detroit.

Gray of the Rockies, is a Colorado SP that need not be feared with a couple home starts on the docket. He has also tossed three QS out of his last four starts (four of six since April 8th) and is providing useful ratios with a 3.12 ERA and 1.19 WHIP through his seven starts, racking up 38 Ks over those 40.1 IP.

Ray is racking up the whiffs of late, garnering 23 Ks over his last three starts comprising 18.2 IP. His control has likewise been superb over that stretch, with no walks being charged against the 29-year-old southpaw. His second start this coming week against the visiting Phillies should provide a nice opportunity to add to his K totals.

Brubaker has yet to allow more than three earned runs in an appearance this season, and this week finds him on the mound at PNC Park for both his starts. His 37:8 K/BB ratio is a selling point, despite the limited opportunities for victories pitching for the last place Pirates.

The other pitcher named Gray has to pitch away from home for both his appearances in Week 7, and the second start in Coors Field is one that carries the usual risk for a pitcher in that park, not that his home park in Cincy is a pitcher’s paradise. Gray has been extraordinarily effective missing opponent’s bats this season with a 13.5 K/9 rate over his four starts, although he continues to make his life more difficult with his sketchy control (4.4 BB/9 over his 20.2 IP), resulting in a less that attractive 1.35 WHIP to accompany a decent 3.92 ERA.

Fried is working on bringing his stats back into tolerable levels, with his ratios inflated due to his early season struggles: 8.44 ERA, 2.06 WHIP through 16.0 IP. He is back from his hamstring issue, and held the visiting Nationals to just a single earned run on four hits and a walk (one HR). He also collected six Ks over those 5.0 IP and if he is available due to his injury, now would be a good time to claim him for your roster.

Keuchel begins the lower strata of this tier. He is not a source for Ks, and hands out too many free passes to be effective without keeping the ball on the ground and out of the seats, both of which he has managed to do for the most part this season. He has a pair of home contests against division rivals, and  his team needs him to step up this week.

Happ is not pitching deep into contests consistently this season, but on the positive side, he has not yet allowed more than two earned runs in any of his five stats in 2021. He is another low K producer in this tier, and will rely primarily on his ability to avoid the long ball, although his underlying metrices (.171 BABIP, 85.6% LOB) suggest that some form of correction looms on the horizon.

The second year 24-year-old righthander Garcia has not pitched deep into any game so far this year, his longest stint being 5.2 innings. A 28:9 K/BB ratio is enticing, as is the 1.01 WHIP and 3.62 ERA. Beware, though, as Jake Odorizzi is due to arrive in Houston soon which may cost him his second scheduled start this week.

Perez has not yet pitched through the sixth inning yet this season, although his underlying metrics indicate that he has been unlucky this season to date as he sports a FIP better than a run below his ERA (3.24 vs 4.40). Facing a couple of last place teams in their divisions this week has potential for success.

It may be useful to consider Eovaldi as both his starts are at home, but he is pitching inconsistently at best, and his best starts recently have been away from Fenway. Thus, caution is advised if you have him on your roster. The balance of these arms have matchups that do not scream “Use me!” or they are simply not trustworthy. It would be wisest to leave them on the wire or your bench in Week 7.

The only real knock on the 26-year-old righty pitching in the North Side of Chicago is his inflated ERA, but he has been working slowly and steadily to reduce that figure. The 0.88 WHIP and 30:7 K/BB ratio (10.2 K/9 through 26.0 IP) are major draws and he could easily be available for your streaming needs on the league free agent market.

The 26-year-old righty has been an effective arm at home, and he takes on the visiting Cleveland squad in Seattle this contest. He will have to rely on his control to keep him sharp, as the 6.2 K/9 rate is severely below league average.

Hill has been hot of late, with just two earned runs being scored against him over his most recent 15.0 IP. Add to that an 18:5 K/BB ratio over that stretch, and you have an effective arm to turn to currently. He gets the Yankees away from their home base, with chance to toe the rubber at home favoring the southpaw.

Kelly’s short IL stint, presumably COVID related, ended after three days, and he returns to the rotation, to take on the visiting Marlins at home, where he has held opponents to three earned runs over his last two starts. Not a great K source, but his metrics suggest he may have been a bit unlucky and due for some positive regression going forward.

Sheffield is coming off a six inning, two hit, no earned run outing at home against the Angels, and will look to keep that success going when the Cleveland team comes calling at the end of Week 7. That superior effort reduced his ERA to a palatable 4.18, and while his control still needs work, the home start lands him aboard the streaming options this week.

Part of the streaming process is finding those arms that are not owned in a high percentage of leagues, and for the most part, that includes Pirate SPs these past seasons. Anderson is working on a pair of consecutive QS, and had a no-hitter going into the seventh inning in his road loss to the Padres. He now gets the visiting Giants at PNC Park, much more favorable for another QS than taking on the San Fran team at home.

Despite the road start, and his team’s relatively less successful efforts on the road than at home, the veteran righthander is set to return to the Giant rotation on Sunday and then settle in presumably to take a regular turn, the next of which will be on Saturday the 15th. Cueto will probably be limited in his first time back on the mound, so keep an eye on how he fares against San Diego. Should he not look up to snuff, then perhaps there are no streaming options to consider this day. Effective outing, however, and plug him in.