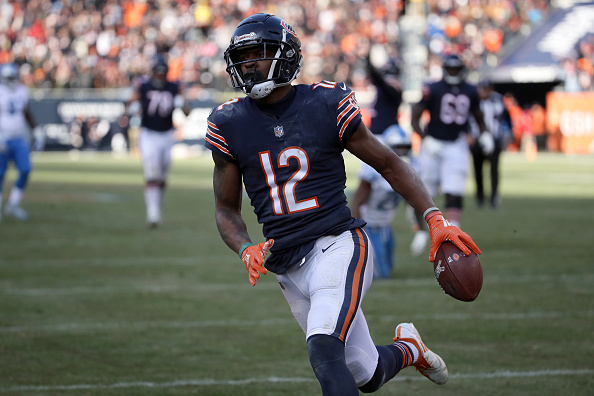 Give someone a quick quiz and ask them who was third in the NFL in targets last season. Most won't get it correct. They will throw the elite wide receiver names out there and when you tell them it was Allen Robinson , the response will likely be, “Really?”

It seems Robinson doesn't get the respect he deserves. While he has been moving up in drafts over the last few weeks, he's still a good value. In my latest best ball draft, I landed the Bears wide receiver with the third pick of round four and have taken him as early as the third round.

Since April 1, Robinson is the WR13 in bestball10s. I have him ranked several spots higher and to get him as a WR2 is a steal. Many will look at Robinson and the Bears poor offense and pass due to the questionable quarterback play. That's a mistake since he has succeeded without good quarterback play throughout his career.

Robinson put up great numbers in his second season in the NFL at the age of 22 with Jacksonville with Blake Bortles as the quarterback. He had 80 catches for 1,400 yards and 14 touchdowns on 151 targets. He averaged 17.5 yards per catch. Last season, Robinson caught passes from Mitchell Trubisky and Chase Daniel and finished 10th in points per game in PPR formats.

The Bears will have a training camp competition between Trubisky and Nick Foles for the starting job. Logic would say Foles is the favorite since he was brought in and is familiar with Matt Nagy's offense. The Bears declined the fifth-year option for Trubisky.

Robinson will continue to get flooded with targets. There isn't anyone to take away from him. While Anthony Miller has talent and is a good pick in the double-digit rounds, the wide receiver depth chart is thin. They added Ted Ginn Jr., who is 35 years old and drafted Darnell Mooney in the fifth round.

The Bears added tight end Jimmy Graham , but he won't change the involvement of Robinson in the offense. There's a chance Robinson is even better if the Bears get better quarterback play. Robinson had 20 red zone targets last year, tied for third in the NFL, and if he can get a few more catchable passes, it's possible he can reach double-digit touchdowns. Robinson caught 11 of the 20 and tied for third in the NFL with targets inside the 10-yard line, catching five.

Robinson finished as a Top 10 wide receiver last season despite the Bears ranking 29th in scoring and tied for last in yards per pass. He had a 63.6 percent catch rate and averaged 11.7 yards per catch, a career low. Volume is critical in fantasy and Robinson will get it. Even if he sees fewer targets, he's likely to see an increase in yards per reception.

It would be fun to see Robinson with better quarterback play. In his NFL career, he has worked with Bortles, Trubisky, Daniel and Chad Henne . He's one of the top receivers in the NFL despite playing with bad quarterbacks. He has been able to make plays and get open due to his talent and it has pushed his fantasy value lower than it should in some formats.

In an ideal scenario, we want players in a good offense. The Bears aren't projected to be a good offense, but Robinson is an elite receiver, locked into a high target share and has shown on multiple occasions he can thrive with poor quarterback play. I have seen many drafts in which Robinson goes in the fourth round. That's a great value and in that scenario, it could be the second receiver on your roster. Robinson may not be mentioned with the elite wide receivers, but he's not that far behind. The lack of great quarterback play likely holds him back from being one of the top tier fantasy receivers, but he's locked in as a WR1 for me.