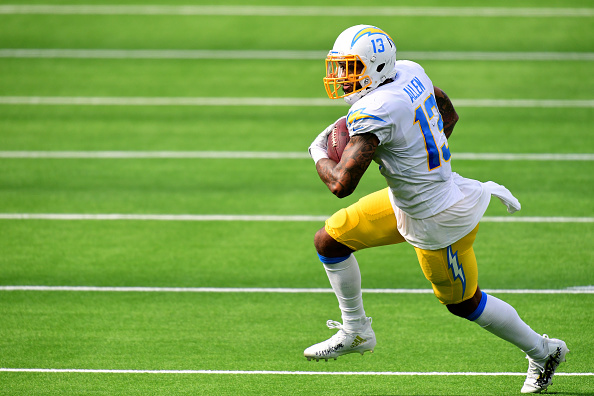 We are back with the Fantasy Alarm NFL Injury Report for Week 16! There are some names we need to keep an eye on heading into the Saturday and Sunday games for this week, so let’s discuss those now!

Parker is dealing with a hamstring issue that has him deemed “questionable” to take the field for Miami as they get ready to play the Raiders in Las Vegas on Saturday. Parker is looking at missing a second-straight game with the injury after also missing Week 15. We will monitor his status as we head into the game.

Edmonds is dealing with a couple of injuries to his lower-body and this has him listed as “questionable” to take the playing field when the Cardinals play host to the Niners on Saturday afternoon. Edmonds was able to play through the injury last week, but he added the knee tweak in the Week 15 game as well, in which has him with an injury status this week. Edmonds was only able to take the practice field in a limited fashion on Thursday of this week after missing both Tuesday and Wednesday’s practice sessions, so it was a positive sign to see him return, but he still doesn’t have a clear designation, so we will watch his status leading up to game-time.

Gesicki was another Dolphin that missed the Week 15 match, and is also listed as “questionable” to play in their Week 16 tilt against the Raiders on Saturday. Gesicki was able to log back-to-back limited practice sessions this week, so his status may be a bit better looking than most on this list. The sense is that Gesicki will likely play, however it is not confirmed. We will have to keep an eye on reports leading up to their Saturday Night kick-off time of 9:15 PM ET.

Hill is dealing with a hamstring ailment that limited his practice sessions this week to just partial-participation on both Thursday and Friday of this week. Head Coach Andy Reid did mention that he fully expects the wide-out to play in their Week 16 home-stand against the Falcons, so likely the “questionable” designation is just a precautionary measure.

Lots of hamstring issues so far in this report and it seems like a popular injury at the time as ARob is also dealing with his own hamstring ailment. Robinson was able to practice in full on Wednesday, but then took a seat on the sideline for Thursday’s session. He was then listed as a limited participant for Friday’s session. This is likely looking like a “game-time” decision for Robinson on if he will take the field for the Bear’s road trip to Jacksonville on Sunday. We will keep an eye on his reports.

What do ya know? Another hamstring injury. Previous reports out of Charger’s practice is reporting that Allen is basically also look as game-time call. Allen was only able to log a limited practice on Friday of this week in preparation for the Charger’s Week 16 clash against the Broncos at home, so we will continue to monitor his status heading into Sunday.

Robinson is still dealing with an ankle injury he sustained against the Ravens in Week 15. Robinson was a non-participant in all practice sessions for the Jags this week, and this does not bode well for his status heading into the Jaguar’s home game against the Bears this week. This reports are stating that Robinson indeed wants to take the field, and it seems the team is being proactive with the sittings of practice to help recovery time. We will just have to monitor his status leading up to Sunday, but it is the early start time, so we should get this info before kick on Sunday… UPDATED OFFICIALLY RULED OUT

Gibson is still dealing with a case of turf toe that has kept him off the playing field since Week 13. Gibson was able to take the practice field in a limited fashion on Wednesday through Friday of this week as the Football Team prepares for their Week 16 home game against the Panthers. He looks to be another “game-time” decision heading into this game on Sunday, and it is the afternoon start time, so we may likely not have this information before their kick-off. Hopefully we get some kind of clearer designation on Gibson beforehand, but in the event we don’t, it will be a risky call on him if you are in the Fantasy Finals.

Brown popped up on the injury report after sitting out of the Ravens Thursday practice session but was able to log a full participation practice on Friday. This does bode well for his status heading into Sunday’s game at home against the Giants, and he is expected to be able to give it a go. This game does also have the early start time, so we should have a full clarification on his status before kick-off.

Smith was listed as a full practice participant for the Football Team on Friday and took the majority of the first-team reps in that practice as well. After being a limited participant in both Wednesday and Thursday’s session, it was good to see him up the reps to a full practice on Friday and this does give positive vibes for his chances to take the field on Sunday against the Panthers. At the time, he is listed as “questionable” to play, and could potentially be a “game-time” decision heading into this game.