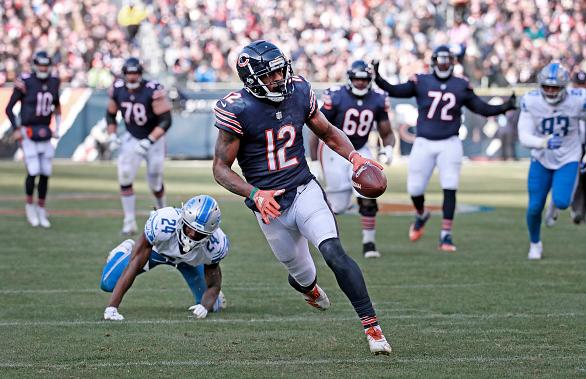 We are back for the Fantasy Alarm Friday NFL Injury Report heading into the weekend of Week 8, and there are a few names we will need to monitor!

Most of the reports out of Viking’s practice were positive about the chances of Cook being able to re-take the field for the Viking’s game against the Packers on Sunday. He was listed as a full participant in Friday’s practice as well, so this obviously bodes well to boot, so all the signs are pointing to a return for Cook. However, he is still being listed as “questionable” to play, so we will still have to keep an eye on his status to be sure.

Robinson was not able to practice once again on Friday and this means that he was not able to log a single practice for this week after suffering a concussion in the Bear’s Week seven match against the Rams. He is currently being listed as “doubtful” to play, and this does not seem like he is trending in the right direction to suit up for Sunday’s match against the Saints. Given the circumstances of no practices after sustaining the head injury, it would likely be safe to say he will more than likely sit this one out.

Carson is still being listed as “questionable” to play in the Seahawk’s Sunday afternoon tilt against the Niners heading into the weekend. Carson was not able to practice Thursday after Head Coach Pete Carrol told reporters that he would not practice until the end of the week, so one may think this does not look great for his status on Sunday. He is being labeled as a true “game-time” decision, and we must monitor his status over the weekend leading up to Sunday. Not great that his game is one in the afternoon, meaning it could possibly not be revealed until right before the start of their game either.

Crowder missed the Jet’s Week seven game against the Bills and is now looking more in doubt of playing in their Week eight clash against the Chiefs as well. Crowder is still dealing with a groin injury, as he was only able to manage one limited practice session this week on Thursday. Signs are not pointing to Crowder playing at the moment and this will be tough for the Jets, who are also without Breshad Perriman already.

Both starting and back-up backs in Seattle are dealing with injuries, but Hyde’s status seems to be the one more in danger of missing at the time as he is listed as “doubtful” currently to play in the Hawk’s game against the Niners on Sunday. Head Coach Pete Carroll pretty much sounds pessimistic about the availability of Hyde for the game, and thus making his chances of playing seem much slimmer. Travis Homer is also “questionable” to play with a knee injury, so in the event all three of these back sit, DeeJay Dallas would be the next healthy back up for the Seahawks

Lindsay is battling a concussion he sustained in the Bronco’s Week seven tilt against the Chiefs and is still listed as “questionable” to take the field against the Chargers on Sunday afternoon. The good part of this is that Lindsay was able to put in a limited practice on Thursday, and even though the Broncos shut down their practice for Friday, they are going to host one on Saturday. This should allow us at least one more report before heading into Sunday. We will continue to monitor his status.

It seems that Gronk is just dealing with a nagging and/or sore shoulder issue that he also played through during the Buccaneer’s Week seven match against the Raiders. Gronk has pretty much been limited all week in practice, but there seems to be no significant notion that he is in much, or if any at all danger of missing their game this week against the Giants.

Ingram continues to deal with an ankle ailment that exited him from the Raven’s Week six game against the Eagles. The Ravens were on bye for Week seven and it doesn’t seem that Ingram was able to overcome the ankle just yet as he has not practiced any this week leading up to their Week eight game against the Steelers. Ingram is listed as “doubtful” and it seems that he is in line to miss his second-straight game ceding way once again for Gus Edwards and J.K. Dobbins to bolster the running back load.

Patrick will head into the weekend listed as “questionable” with a hamstring injury. Patrick was absent from all practices this week, and with the Broncos not practicing on Friday, his next open report should come on Saturday after their practice session. He would at least have to show some limited participation to be considered in any form or fashion to take the field on Sunday against the Chargers, so we will look to see what the reports say after their Saturday practice.

Freeman was a non-participant in the Giant’s Friday practice session and his availability for the Giant’s game on Monday is now looking pretty bleak. The Giants last played the Thursday game in Week seven, and it seems the time off was not enough for Freeman to make much of a recovery from the ankle ailment. It does seem that Freeman is more likely on the side of sitting rather than playing, so we can likely assume he will not take the field for the Giant’s Monday Night Football game against the Buccaneers.

Shepard is dealing with a couple different nagging injuries currently at the time. Shepard was able to log another limited practice for the Giants on Friday and is now officially listed as “questionable” to play in their Monday Night game against the Buccaneers. We will continue to monitor his status, but if you have other options you can play in season-long, may be worth not taking the risk unless you can find flex options. After all, we know that Shepard does have quite an injury history to rely on.

Higbee is dealing with a hand injury and this has ultimately landed him with a “game-time” decision tag for the Ram’s Week eight match against the Dolphins. Higbee was able to log limited practices on both Wednesday and Thursday, so this does provide some positive signs for his chances. The hopes are he will be able to suit up, but for the time being we will just have to monitor his status over the weekend. The good thing is this game is the early set on Sunday, so either way we will know his status before the games begin on Sunday.

Harris is listed as questionable to take the field for the Pats on Sunday as they travel into Buffalo to take on the Bills. The reports from Harris himself say he “feels fine” and that he thinks he is in no danger of missing the Pat’s Week eight game, but for some reason he is still listed with the “questionable” tag. It seems he should be fine to go from the reports, but we never know the truth until his status becomes official.

Dalton is listed as “doubtful” to take the field against the Eagles in the Cowboy’s Week 8 travel. Dalton was unable to take the practice field any this week after suffering the concussion after a dirty hit against the Bengals in Week seven, and this could potentially lead way for a spot-start for Ben DiNucci this week. DiNucci spelled Dalton last week after the hit that exited Dalton from the game, and now could be looking at his first career NFL start as well if Dalton is ultimately deemed ruled out, as it seems he will be after not being able to practice at all this week.