Sean Mitchell pores through the data to bring you his top Monkey Knife Fight prop plays for Week 8 of the NFL season. 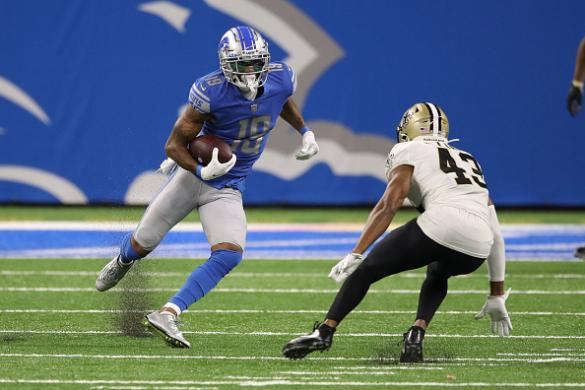 Welcome back to the Week 8 edition of the Fantasy Alarm Monkey Knife Fight NFL Prop Article! Once again last week we recorded a 1-3 overall record and it makes it the third week in a row for that result. Props are hard. These aren’t exactly betting a single player prop either, as you are taking a pair of props with every bet, so keep that in mind. However, we have some JUICY props on tap for Week 8, so let’s get into it!

The ideal here to go with Rivers over Stafford is the fact that the Colts pass defense has been rather good so far this season. They are in the top five in pass attempts allowed, top ten in yards per attempt, and top five in pass TD’s allowed. Also, Rivers has tended to throw a bit more on the road so far this season, and I don’t expect this to be much of a difference here. Taking the small number of passing yards with Rivers. T.J. Hockenson has the toughest match up of any skill player in this match, as the Colts defense has allowed the fewest number of fantasy points to opposing TEs at an average of just 3.6 fantasy points per game. Golladay is the main receiver here for the Lions and I expect them to rely on him once again, so give me the small reception prop with Golladay over Hock as well. Lastly, Swift continues to be the passing back in this Lions offense and we all know that Hines is also the pass-catcher for the Colts, however he hasn’t caught more than three balls on the road in his last two tries. Swift has four receptions in two of his last three, and I don’t see this trend changing.

Rodgers has been on a tear this whole season so far, and he started this season off with a 33.8 fantasy point effort against the Vikings in Minnesota. Rodgers has topped this number set forth in four of his six games so far this season, and he also had 19.2 vs DET. The Vikings defense has not been good this season, allowing the seventh most fantasy points to the QB position at an average of 22.3 per game. Let’s take a look at Dalvin Cook , who is practicing this week and looking to make a return to action for Week 8. The Packers are allowing the MOST fantasy points to opposing backs at an average of 29.7 fantasy points per game. Cook put up 21.8 fantasy points in this same match up in Week 1 when they hosted the Packers, and has topped the number given in five of his six games that he has played in. The one he didn’t hit this number? 17.1 against the Colts on the road. I feel pretty comfy as long as he plays, he should easily eclipse this number. (If he doesn’t play, we get refunded anyways)

This one is pretty simple. Bengals throw the ball a ton, and Joe Burrow has topped 300 passing yards in five of the seven games he has played in. Also, Mixon was not a practice participant in Friday’s practice, thus meaning Gio Bernard will take the RB duties once again, and we saw how much Burrow threw last week against the Browns. Pretty much pairing up Burrow with his favorite target in Tyler Boyd and his over yardage prop as well here, as he has topped this number in two of the three games at home so far this season (only one he did not was against Chargers), and also has topped it in four of the seven games played. The only games he did not exceed this number? On the road against IND, BAL, and at home against LAC as mentioned above. TEN is not a worry here for Boyd at home. The Bengals run D isn’t good, but they have been better lately. I know it won’t be easy to contain Henry, but they will definitely try to sell out to stop the run against him, so I believe this will make Tannehill throw a bit more, thus why I like his passing yardage over as well.

*Must hit all six! This both QB numbers are easily applicable here, CLE has actually been pretty decent against TEs in terms of yardage, Jarvis hasn’t his this number in any game so far (Yes, I know OBJ is out), Vegas has been not so good against the run and Hunt should eat a bit, and lastly, Higgins has always been a favorite target of Mayfield, and should be even more so now that he will get extra looks without OBJ!