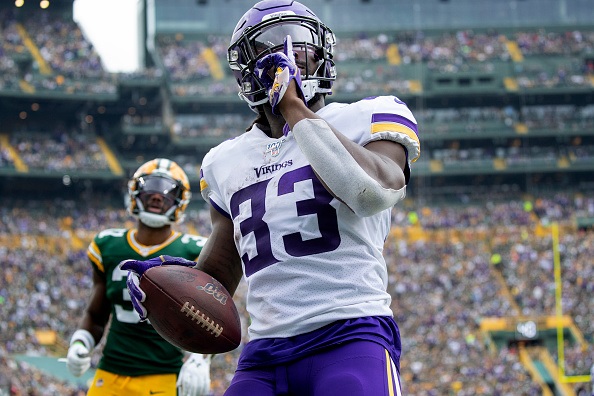 Welcome back to the early weekly Fantasy Alarm NFL Injury Report! Let’s take a glance at some of the more important statuses to watch as we head into Week 8 of the NFL season!

It has been yet to be fully reported as official, but it looks as if CMC could look to make a return to action in the Panther’s upcoming Thursday night game against the Falcons at home. McCaffrey was reported to have looked good in the on-field practices he had so far during the week, however there has yet to be a roster mover to make room for the full return of CMC on the active roster. With this being the first game of the week for Week 8, we should know this status by Thursday at game time.

There was reports out of Viking’s practice that Cook was set to re-take the practice field for Wednesday’s practice session, but the amount of work he would put in was yet to be determined. This does bode well for Cook’s chances of returning for the Vikings tilt against the Packers on Sunday. All of the signs are pointing to a Week 8 return for Cook.

As mentioned many times before, the calf injuries tend to be some of the longest-lingering ailments of any kind, and it seems that this one is still lingering around for Aaron Jones as well. Jones was held-out of the Packer’s Week seven match against the Texans and now has yet to see the practice field through Wednesday heading into the Packer’s Week 8 match against the Vikings. It was reported and reiterated that the Packer’s coaching staff would be “very cautious” with Jones before allowing him to return, so this could easily turn into a second week of sitting for Jones if he doesn’t show any promise the rest of the week.

Thomas has yet to practice this week as well and this doesn’t look great for his chances of making a return to the field for the Saint’s Week 8 match against the Bears on Sunday afternoon. On ESPN during Monday’s show, Adam Schefter mentioned that he felt strongly that Thomas could likely be looking at missing yet another week here for the Saints, as he suffered a Grade 1 hamstring strain, along with still dealing with his high-ankle sprain as well he acquired in Week 1 of the NFL season. It’s a touchy situation for Thomas fantasy backers, but hopefully Thomas can return sooner rather than later, but it doesn’t seem like it will be for Week 8.

It was confirmed by Head Coach Matt Nagy that Robinson did indeed enter the NFL concussion protocol on Wednesday of this week. The concussion was sustained in the Bear’s Monday Night Football loss to the Rams, and now it could potentially place Robinson in danger of missing the Bear’s upcoming clash with the Saints on Sunday afternoon if he cannot pass protocol in time. This is a status worth keeping an eye on as we head into the latter part of the week and on into the weekend.

It was reported that Sanders was not able to take the practice field on Wednesday’s practice session for the Eagles. Head Coach Doug Peterson told reporters that Sanders is being labeled as “day-to-day.” However, with Sanders not being able to take the practice field at all, compared to being limited or such, this doesn’t exactly send the “day-to-day” message, but the Eagles could just be taking it very easily and caution with Sanders heading into the Eagle’s Sunday Night Football clash with the Cowboys. We will continue to monitor and hopefully have another report for Friday on his status.

Mixon didn’t play in the Bengal’s Week 7 game against the Browns and could potentially be looking at a second, back-to-back absence from the playing field in the Bengal’s upcoming game against the Titans on Sunday. Mixon was reported to not have taken the practice field for the Bengal’s Wednesday practice session, so obviously this doesn’t look very optimistic for his chances at taking the field. We will look to see if Mixon will be able to practice any at all this week heading into the weekend.

Carson is now being classified as “week-to-week” after sustaining a mid-foot sprain during the Seahawk’s Sunday Night Football over-time loss to the Cardinals. Carson exited the game right before the intermission and did not return to this one. This does seem like it could run into Week 8, as the Hawks will be hosting the Niners. Being “week-to-week” makes this much more convincing that Carson will veer more to the sideline than on the playing field for Sunday.

It has been reported that Wilson Jr. is looking to make a stint on the Injured Reserve list after suffering an ankle injury in the Niner’s win over the Patriots on Sunday. This doesn’t come at an exactly timely manner as the Niners already have fellow running backs in Raheem Mostert and Tevin Coleman already on the Injured Reserve list, however, it does seem that Coleman is very close to a return.

Tough news for Deebo again here as he is looking at missing the next two games for the Niners with a hamstring strain. Like Wilson Jr. above, Deebo sustained the strain in the Niner’s Sunday victory over the Patriots, but it is already being reported that Deebo will indeed likely miss Week 8 and could easily be looking at an extended absence into Week 9. We will monitor his status heading into the latter part of the week for any improvement.

It was deemed by an MRI on Beckham Jr.’s knee that he did indeed tear his ACL in the Brown’s game against the Bengal’s last Sunday. This injury removed OBJ from the 53-man active roster, and it will end his NFL season as well. Tough break here for OBJ, and we will look to see him return after recovering for next season

Crowder was ultimately held-out of the Jet’s Week seven match against the Bills and is now being re-evaluated for this week as the Jets look to take on the Chiefs on Sunday. Crowder was listed questionable all week and even leading up to the Jet’s Week 7 game, but it seemed he either was not ready or suffered a setback while in recovery. It doesn’t come at the best time as the Jets are already without Breshad Perriman at the moment due to the concussion protocol, thus leaving the Jets pretty thin at the wide-out spot if Crowder doesn’t make any progression this week.

Parker was only a limited practice participant to start the Dolphin’s Week 8 practices and even though we have seen this story a few times with Parker already this season, it still needs to be monitored. Hopefully, this is just the Dolphins playing it safe with Parker in practice, and we will hope he improves as the week goes on. We will hopefully have another report to make on Parker on Friday.

Ju Ju was not able to take the practice field for the Steeler’s Wednesday practice due to reports. This isn’t a new theme for Smith-Schuster as we have seen him miss a few Wednesday practices this season so far, and then returning to the practice on Thursday, so hopefully this is the case once again. We will look for a follow up on this status on Friday.

Lindsay did not practice on Wednesday due to the concussion he sustained in the Bronco’s Week seven match against the Chiefs. Being in the League’s concussion protocol and practicing while doing so is one thing, however, this is not the case for Lindsay so far to start the week as he is not hitting the practice field. This is a concerning situation to digest, and even though he may get through the protocol, but if he has no practices logged, it could turn into a potential sideline stay for the Bronco’s Week eight match against the Chargers. Hope to have more on this by Friday.

Ingram suffered an ankle injury during the Raven’s Week six clash against the Eagles and even though the Ravens were on bye for Week seven, Ingram has still yet to take the practice field in preparation for Week 8. Obviously, this is not a great look for his chances of being available for the Raven’s tilt against the rival Steelers in Baltimore on Sunday, but we will continue to monitor his status heading into the latter part of the week. Look for Gus Edwards and rookie J.K. Dobbins to bolster the load if Ingram is ultimately not able to take the field for Week 8.

Reports out of Bronco’s practice was that Patrick was not on the field, or even present for the open-practice session for the media on Wednesday as he deals with a hamstring ailment. Patrick is currently being listed as “day-to-day” with the injury and the outlook doesn’t look promising for his chances of taking the field for the Broncos against the Chargers on Sunday at the current moment. We hope to have some better news by Friday on his status.