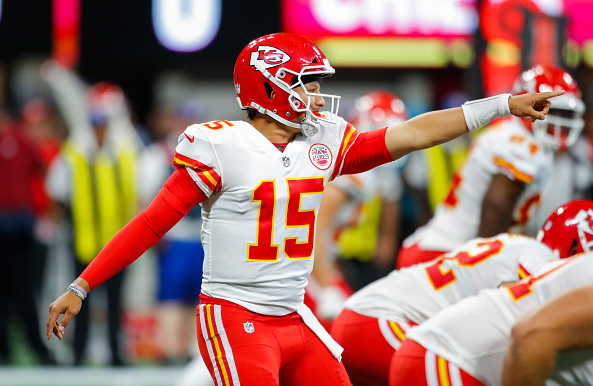 Quarterback is perhaps the most important position on your fantasy football roster, even if it is one that we preach that you wait on. The position has become deep enough in the last few years (see my last article about the next generation of young quarterbacks), that in a traditional 12-team league that everyone will get a quality quarterback. You can wait and get a solid quarterback, however there is no doubt that the elite level at the position consists of two men. The previous two Most Valuable Player winners in the NFL were Patrick Mahomes and Lamar Jackson . Between Mahomes ability to make every throw and extend every play and Jackson’s ability to run the ball and make the defense look silly, both men are at the top of the game. The question for those of you who don’t want to wait to draft a quarterback, is which of these two men would be the one to take. There are a number of factors to consider when making the choice and let’s run through them to decide which player should be the first quarterback taken off the board in your fantasy draft.

While both offenses are incredibly different, the success of both teams revolves around the play of their quarterback. The Chiefs do it in a much more aerial way. Mahomes threw the ball 580 times in 2018 and likely would have been close to the same number last year if he didn’t deal with the injury problems he did. To see him throw the ball 40-50 times in a game is fairly common. He threw for nearly 5,100 yards in his MVP season with a mindblowing 50 touchdowns. The Kansas City Chiefs will go as far as Patrick Mahomes will take them, and last year that was all the way to the championship. On the flip side, the Ravens are a run-first team. Usually, that would limit the ceiling of a fantasy quarterback. However, Jackson isn’t your normal fantasy quarterback. The Ravens are a run-first team, but unlike every other team, he is nearly their RB1 as well as their starting quarterback. Mark Ingram did run the ball 202 times last season, but Jackson was right behind him with 176 carries. So, while the Ravens might like to run first, Jackson does a great deal of that running. That makes him very valuable in fantasy when you get one point per ten rushing yards. He ran for 60 yards or more in 12 games last season, which is as good as another passing touchdown and a half. He may have only thrown the ball 401 times in 2019, Jackson is still the complete focus of the offense. 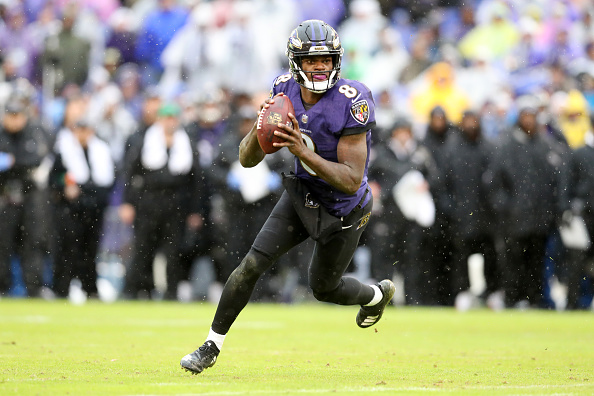 A huge aspect in the success of a quarterback is the weapons around him. Neither team is littered with incredible weapons, but the advantage here is clear. Both teams have great tight ends in Travis Kelce and Mark Andrews . And while Andrews had ten touchdowns last season, he also has some stone hands at times. On the Kansas City side, obviously Travis Kelce is the best at the position. He had one fewer reception in 2019 than Mark Andrews had targets, and he is the undisputed best at the position. When it comes to wide receivers there is really only one that excites anyone. Tyreek Hill is one of the top ten at the position. His speed is unmatched in the league, and he can take any catch and take it to the end zone. The Chiefs also have second-year speedster Mecole Hardman showed some great flashes of potential last season and looks like he is set to take the next step in 2020 towards greater fantasy success. The Chiefs also have two good pass catching running backs in Damien Williams and rookie Clyde Edwards-Helaire. On the Baltimore side, their best receiver is second-year man Marquise Brown . “Hollywood” has elite speed like Tyreek Hill but doesn’t have the route running discipline or the reliable hands. Brown is just 22, and certainly has the ability to further mature and turn into a great receiver, we just haven’t seen it yet. He got off to a great start last season with 12 catches for 233 yards and two touchdowns in his first two games, but by the end of the season he was a total non-factor and had just 130 total receiving yards in his last seven weeks of the regular season. The future is likely bright for Brown, but it is unclear if that will be in 2020. The Ravens also has a veteran possession receiver in Willie Snead as well as two other young and potentially dynamic receivers in Miles Boykin and Devin Duvernay. Snead doesn’t do anything exciting, and the young kids need more seasoning.

Obviously, the five guys in front of the quarterback is crucial to his success. According to Pro Football Focus, the Ravens were the second-best line in 2019, while the Chiefs were ranked 16th. The lower ranking for the Chiefs was largely more a result of the run blocking than pass blocking, but both are important. When it comes to these two players, the offensive line is a little less important for them as compared to other quarterbacks because they are both incredibly mobile. While Mahomes doesn’t run nearly as often as Jackson does, he is great at extending plays and finding receivers open down the field. A good run-blocking line is important for Jackson considering how much he runs, but if a defender does bust through untouched, he is the best in the league at making them miss, sometimes in seemingly impossible fashion. While this might not be the most important factor when comparing these two, the advantage is clear.

Both quarterbacks are very good at not throwing interceptions. Mahomes has just 17 in his two seasons, which is impressive considering he has thrown the ball 1,064 times. Jackson only threw six interceptions in 401 attempts. The difference comes in the fumbling. Of course, with way more rushing attempts comes the possibility of putting the ball on the ground. Jackson fumbled nine times last season, although only two were lost. Mahomes also lost two fumbles, but he only fumbled three times. With interceptions being fairly even last year, the slight edge goes to Mahomes for fewer fumbles and one fewer interception despite having over 100 more attempts.

Jackson is a once in a lifetime talent. At times, it appears that he is completely unstoppable. When the defense tries to stop his running, he hits Marquise Brown or Mark Andrews with a big gain on a pass. When the defense tries to stop the pass, he runs for 35 yards. Mahomes can throw it sidearm, left-handed, underhanded, or he can cannon the ball 45 yards down the field in the air, and he has several speedy receivers to go get it.

You do have to continue to worry about his injury possibility with the amount that he runs the ball. Of course, injuries can happen to any player, but when Jackson runs the ball 150+ times every season, that is going to be many more hits than most quarterbacks take. A certain number of those do end with him running out of bounds and not getting hit, but the added running attempts make him a little more susceptible to injury. Mahomes dealt with two bad injuries last season with the ankle and then the dislocated knee cap. However, he toughed it through the ankle injury and missed minimal time with the knee injury. He clearly wasn’t the same guy on the field, but he was still out there.

The NFL is moving towards a more mobile quarterback, and Lamar Jackson is the best of the bunch. I don’t know if I expect him to run quite as much this year, or if I expect him to throw 36 touchdowns again. His accuracy is not the best in the league, even though his completion percentage was slightly better than Mahomes last season. His lack of a consistent, explosive receiver is a slight concern. Mahomes can run when he has to even though it is nowhere near at the level or elusiveness as Jackson. Mahomes has had two seasons of elite play, even if his statistics weren’t as gaudy as they were the year before. The injuries certainly played a factor there. There is a long history of successful quarterbacks with Mahomes skill set.

While both players are incredible talents and are worthy of being the top two fantasy quarterbacks, if I had to make the choice it would be…….Patrick Mahomes . As dynamic as Jackson is running the ball, there has to be a slight concern that it leads to injury. Also, as stated earlier, his accuracy at times was horribly bad. I still believe that he will have an amazing season, and there will be several weeks where he will win your matchup for you by himself with 250 yards passing, 80 yards rushing, and three total touchdowns. It is nearly a given if he is healthy that he will run for 1,000 yards again.

I just feel that Mahomes is more of a sure bet. His arm is unmatched. His weapons of Travis Kelce and Tyreek Hill are both better than anything Lamar Jackson has. His line isn’t quite as good, but he is mobile enough to make things happen when the play breaks down. He is the Brett Favre of the next generation without the ridiculous interceptions. His competitiveness and fire are second to none, and if he threw 45-50 touchdowns again in 2020 you shouldn’t be surprised. You can find me on Twitter @fightingchance if you would like to offer your opinion.