We are down to the finale! It is very exciting and very sad that this amazing season is coming to an end. There have been a ton of memorable moments along the way from Boston Rob’s Buddy System, Sandra sitting out every challenge, Denise slaying the queen, just to name a few. We are down to the final five, although one player is going to return from the Edge of Extinction in this final episode. Figuring out who that is will be the key to winning this week because of the scoring system. FanDuel is still requiring a four-player roster, so it will be very important to not only pick someone who is on the Edge as one of them, but to pick the right person. This certainly seems like Tony’s game to lose, but so much can still happen. Ben would appear to be in the most trouble. He was nearly the vote last time, and although he has an immunity idol in his pocket, I feel like he could be fooled and get voted out without playing it. After that, it is anyone’s game, especially since we don’t know who is coming back.

I believe Fire Tokens are now out of play. They did say on the last episode that Day 35 was the last day to spend fire tokens. So, instead of fire tokens let’s take a look at who has idols and advantages for the challenge for someone to come back from the Edge.

Tony ($39) – There is no doubt that he has played the best game this season. He has won challenges, he has played a great social game, and he has driven the bus on numerous votes. He didn’t play the Crazy Tony way for most of the beginning of the season, and it has done him well. I have no idea how they didn’t try to vote him out in last week’s episode when he didn’t have the immunity necklace for two votes. He does have that immunity idol in his pocket, so he clearly should survive one vote. However, if or when he uses it, that gets you points. He will absolutely be on a lot of confessionals in this final episode, and Tony is basically a no brainer to use in FanDuel this week. The only thing that can take him down, in my opinion, is if he is put in the fire making challenge in my opinion. If Tony gets to the final Tribal Council he will win.

Sarah ($30) – She is tightly aligned with Tony with the Cops R Us alliance, but I really feel that it could dissolve at any time. She has been getting a little more on edge each week, although she hasn’t really been a target yet. She definitely could win a challenge, she has played a great social game, and I feel that if Tony doesn’t make it to the Final Three, Sarah has a real chance of winning this game. She has played a great game from beginning to end, and certainly would be a solid choice for your FanDuel roster. I feel like something is going to happen to get her out before the end though. She is also without any sort of protection from getting voted out, and while she has the alliance with Tony and seemingly Denise, it doesn’t seem strong at all. If Tony remains in control, he would be smart to take out his fellow officer as she seems to be the best chance of anyone to get votes over him.

Michele ($24) – Many feel like Michele doesn’t deserve to be here, although I would disagree. She has been on the wrong side of the vote a number of times, but she also was making critical decisions on votes in the middle of the season. There is also something to be said for playing from the bottom for a long time, as it is not easy to continue to escape the votes. She won immunity when she needed to last week, and she could do it again. She likely would have been the vote instead of Nick if she hadn’t won, but that doesn’t mean that she will be the vote again if she doesn’t win immunity again. So much will change after someone comes back from the Edge. Now that they will be down to the final six, people are going to start trying to get rid of people that they view as a threat to win. While I think there is a possibility that she can be the Sole Survivor, it certainly doesn’t seem like those on the island now think so. She also has been a part of many confessionals, which also gives you points. The fire challenge would appear to not be in her best interest, but she also likely could be chosen to go to the Final Three if she makes it down to four.

Denise ($21) – She acted like she was sacrificing herself by buying rice so she would have a meal, but in the end the votes didn’t go towards Denise. She has been one of my favorite players this season. She has been great at challenges, she has made a couple good moves, and she has played a pretty decent social game. She certainly could be a target in the next couple of votes, and she has no immunity protection. However, a lot of times towards the end of the game, Survivor makes the challenges endurance-based, and those are the type that Denise has excelled at. Also, and this is just a feeling from watching, I feel that if she is forced into the fire making challenge that she would be good at it. Better than most of the other people left. If there is an individual reward that the winner gets to chose someone to go on the reward, I feel like Denise has a shot of being that person. She has a lot of opportunities to score you points even if she doesn’t win the whole show, but there’s a chance she could do that as well. 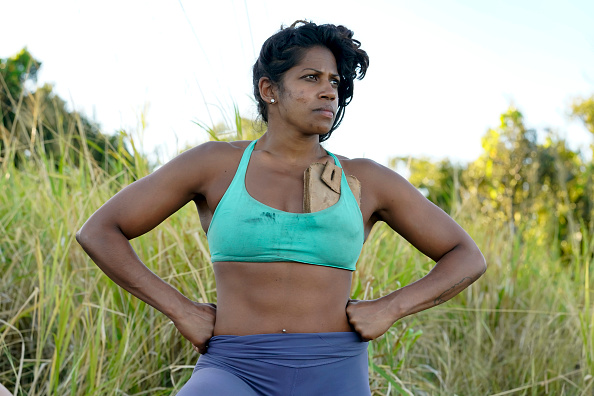 Natalie ($18) – She is the most impressive physical person out there. Natalie is a Cross Fit trainer and it shows. She has been able to do the coconut challenge and log challenge on the Edge, and her endurance is impressive. Somehow, despite spending the whole show on the Edge, she seems to still be strong. She also has three advantages for the challenge, and she has an immunity idol if she comes back. It might be hard to vote for Natalie to win the game if she makes the end, but at the same time it would be impressive. Not only that, but she is spending a ton of time on the jury, and she bought an immunity idol for Tyson. Personally, she is one of a few people I am rooting for in this challenge.

Tyson ($16) – It came down to him and Boston Rob for this part of the article, but I wonder if Rob has the drive left, he has no advantage, and he has the busted elbow. He has an advantage for this challenge, and he already won the first one. He is one of the more durable players in the game. Tyson is physically and mentally strong, and he has a history of winning challenges on Survivor. Thanks to Natalie, he also has an immunity necklace if he was able to get back into the game, and if he were to make the fire making challenge, he would excel at it. He has already been voted out twice, which means these people don’t want Tyson to get to the end, but he only needs to survive two votes, and he would have an idol to get through one of them. He certainly would be a great candidate to not only get back into the game, but also be named Sole Survivor.

Sophie ($10), Parvati ($9), Wendell ($9) – If you want to use Tony and Sarah, you are going to have to use Denise and then one of these three folks. All three would be great choices to win the challenge to get back into the game. Sophie was a better competitor in challenges than I expected, and it wouldn’t be the least bit surprising to see her back in the game. She would have an ally in Sarah for sure, which could also be troubling for Tony. Parvati did pretty well at the first challenge to come back from the Edge even though she didn’t win. She is a Survivor legend, and she is very good in all aspects of the game. She would be a handful to deal with if she got in the game, and I feel like she would cause all kinds of chaos. It might be a bit of a long shot, but it sure would be fun. Wendell hasn’t been on the Edge for an extremely long time, and certainly showed last week, that he still had a lot of gas in the tank as he was outrunning Natalie until he went to the wrong place on the island for the advantage. Wendell has long shown that he is a great physical player on the show, although he will have a hard time getting the jury votes to be named Sole Survivor it would seem.