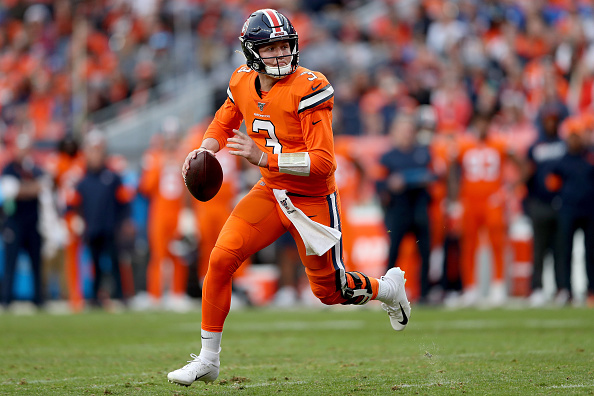 The majority of the NFL offseason has come and passed. The glut of free agency is over, and the NFL Draft is now in the books. With that we see some fluctuation in fantasy value for quarterbacks, most of which did not even change teams, but the team around them coming into 2020 is very different. While not all of these players fit in the QB1 landscape at the start of draft season, the change in personnel around them could have them surprising us in 2020. The following are a list of quarterbacks who have watched their stock rise this offseason because of the moves made around them.

Somehow, he still hasn’t worked out a long-term deal with the team, but Dallas did take time to give Prescott what he needs to succeed. Jerry Jones opened his rather large pocketbook and handed Dak’s top receiver, Amari Cooper , a mega-contract to the tune of $100 million dollars, reuniting him with Michael Gallup to form one of the best one-two punches at wide receiver in the league. And then during the draft, somehow CeeDee Lamb inexplicably fell right into the Cowboys lap at pick 19. Receiver certainly wasn’t a position of need, but there was no way that Jerruh was going to pass up on a highlight reel at wide receiver in the first round, especially one that some felt was the best receiver in the draft. Prescott now has a force field of an offensive line in front of him, a dynamite running back, and now one of the best receiving trios in the league. If he doesn’t finish inside the top five fantasy quarterbacks in 2020, it certainly would be a huge surprise.

Murray had one of the best offseasons in the NFL, and he didn’t have to do anything. Of course, the big news of the free agency period was when the Cardinals traded David Johnson for DeAndre Hopkins , gifting Murray one of the top three receivers in the game. Considering the frequency that this offense likes to throw, nothing could have been better for Murray. Arizona also brought in free agent tackle D.J. Humphries and drafted tackle Josh Jones in the third round. Finally, the Cardinals did sign running back Kenyan Drake to the transition tag which keeps him in town. Drake was not only a great pass catcher out of the backfield, but also is a great runner which keeps defenses from pinning their ears back and just coming after Murray. Most consider him a lock to be a top five fantasy quarterback this year, with some liking him as high as third.

Cleveland had the talent to have a quality offense in 2019, even though it didn’t pan out. Mayfield’s inconsistent play certainly didn’t help matters, but the Browns spent the offseason taking even more steps to be sure their prized quarterback succeeds in 2020. First, they shored up a porous offensive line by bringing in Jack Conklin from Tennessee and drafting Jedrick Wills to be the bookend tackles. They also signed the prized free agent at tight end in Austin Hooper to give Mayfield yet another weapon to throw to. So, he should have more time to throw this year, and he now has a near embarrassment of riches of options to throw the ball to. Mayfield disappointed fantasy owners in a big way in 2019, but he has no excuses now not to have success in 2020. He certainly has the tools in place to repeat his rookie season and get back in fantasy player’s good graces.

In his rookie season, Lock didn’t have a lot of toys to play with. He sure did like Courtland Sutton , but after that he had an anemic running game and not many exciting guys to throw to. Well, things have changed for 2020. They brought in Graham Glasgow at guard to help protect him and a cavalcade of weapons. Denver signed Melvin Gordon to give the Broncos a more reliable running game to help keep defenses away from Lock and give him an outlet to check down to. Then Denver went bananas in the draft. They landed Jerry Jeudy once the Raiders let him slide to them, followed that up with K.J. Hamler in the second round, and in the seventh round added Tyrie Cleveland who isn’t a big name, but some think will stick with the team. Oh, and did I mention that Courtland Sutton is still there and could be a top 15 fantasy receiver? Lock has a big arm, and now he has the targets to throw to. There will certainly still be some growing pains with Lock in his first full season under center, but he just became a much more attractive option for those of you who are in dynasty or superflex leagues.

It was a terrible 2019 for Darnold that started with him getting mono, and when he was able to come back he was mostly running for his life behind one of the worst offensive lines in football. The Jets lost Robby Anderson in free agency, but they were able to make moves that should help Darnold this year. Although some didn’t think they spent wisely in free agency, they were able to land some talent. They brought in Breshad Perriman at wide receiver, who finished the season quite strongly in Tampa Bay when they had bad injuries. They tried to help the offensive line by signing George Fant , a tackle from Seattle, and guard Connor McGovern from Denver. Neither guy was a flashy add, but considering how bad the line was last year, it will help. In the draft they helped Darnold even more by taking tackle Mekhi Becton who was viewed as a must-draft for a team that needed line help in the first round. Pairing him with Fant and McGovern, it gives the Jets more peace of mind for their young quarterback and hopefully gets their running game back on track. They also drafted Denzel Mims, a dynamic wide receiver in the second round, and La’Mical Perine to give some depth to the running game in the fourth. The Jets now at least appear to have an offense that can move the ball and score some points. Darnold certainly doesn’t move into the top 12 or 15 at his position in fantasy, but he certainly should be in that 16-18 range and is definitely a solid second quarterback for a superflex league.

Remember in the beginning when I said that not all of these guys would be vaulted into fantasy greatness? This was the one I was talking about. There are a lot of question marks with Carr and his future, but in 2015 and 2016 he had a combined 60 touchdown passes, so there is talent in there. However, last year he had Darren Waller and not much else to throw to. And while the Raiders made some questionable calls, they did try to make things better. They brought in Nelson Agholor from Philadelphia to boost an anemic receiving corps. He is far from a flashy name, but if he can get back near his 62/768/8 receiving line from 2017, he can help the offense. The Raiders sure caught some headlines in the NFL draft when they took speedster Henry Ruggs in the first round, and then Lynn Bowden and Bryan Edwards in the third. Ruggs was the fastest receiver in the draft, Bowden is a very versatile player, and Edwards is a highlight reel waiting to happen. They also took John Simpson in the fourth round to beef up the offensive line some. It will likely be a fascinating year for Jon Gruden and the Raiders as they move to Vegas, and while not everyone might believe in the team, they certainly made plenty of moves to try to make this offense better. And considering they will likely be playing from behind a lot, there will be plenty of opportunities for Carr to throw the ball. With these moves he goes from a guy you didn’t think about in fantasy to a potential top 20 finish as a fantasy quarterback and someone who might be able to help you in certain weeks.