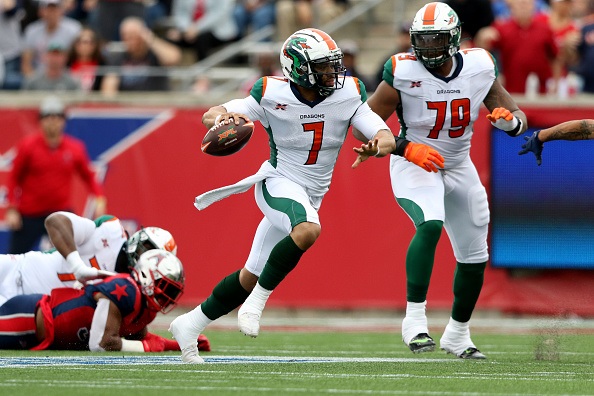 We are at the halfway point of the XFL season, and I have to say so far I am really enjoying it. Sure there are some bad plays, there are some low scoring games, but let’s be honest, the NFL has those too. The XFL is not the NFL, nor is the play as good, however, the play isn’t bad at all and I am looking forward to the future of this league. However, before we look towards the future, let’s continue to look at 2020 and some players that can help you win your season long leagues as we head into the second half.

Colby Pearson, WR, New York Guardians. He was in last week’s waiver article, but it wasn’t with a ton of confidence. The Guardians offense looked much better with Luis Perez at quarterback, but they were still far from anything exciting. Pearson now has to come into consideration for adding to your team with his five catch, 95 yard afternoon. Sure, 80 of it did come on the long touchdown catch, but he has still been targeted 12 times in the last two games, and 25 times in the season’s five games so far. This is usage you can’t ignore, and with Perez remaining the Guardians quarterback, Pearson should continue to be productive.

Saeed Blacknall, WR, Los Angeles Wildcats. The injury to Nelson Spruce certainly opened up some opportunities for other Wildcat receivers, and in Week 4 when Blacknall caught a long touchdown he certainly got my attention. However, he was not included in last week’s waiver article because the touchdown was his only catch of the game. This past week he was targeted seven times, and caught three of them for 78 yards and had a second touchdown. He now needs to be rostered. Spruce might not be too far off from returning, but Blacknall certainly has earned trust with Josh Johnson at quarterback. He has shown the ability to stretch the field, and with Los Angeles looking like a very explosive offense of late, Blacknall could help you in the second half of the season.

BJ Daniels, QB, Seattle Dragons. How in the world did this guy not get a chance before Week 5????? What has Jim Zorn been thinking? Granted, Daniels stats aren’t something that jumps off the page at you with just 114 passing yards, but he was in control of the offense. Daniels also showed a good ability to improvise when the play broke down, especially with his legs. He had two short touchdown runs to give him a good statistical game, and you have to believe he remains the starter going forward. He certainly doesn’t add a lot of value to the receiving group, but he is definitely better than Brandon Silvers, and with his running ability, Daniels makes for a sneaky cheap play in the coming weeks. 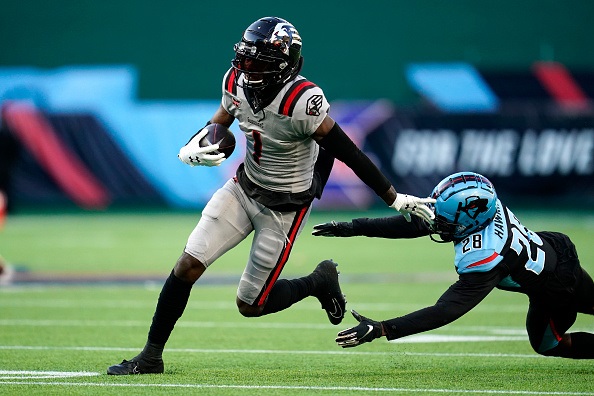 MeKale McKay, WR, New York Guardians. He was one of the receivers we were really watching when the league started, but after a strong first week, McKay had really fallen on his face. It wasn’t entirely his fault, he did have awful quarterback play. He jumped back on the radar this week with a three catch, 67 yard game, which could have been more without an awful drop. That being said, he was targeted a season high seven times, and Luis Perez seems to have stabilized this offense. McKay has some big play potential, and if the Guardians continue to play well he could have a big second half of the season.

Andre Williams, RB, Houston Roughnecks. He certainly isn’t going to displace James Butler as the Roughnecks starting running back, but Williams got some more work this week, logging ten carries for 54 yards. You’d like to see him become part of the passing game if he is going to have lasting fantasy value, but Williams is more of just an insurance policy at the end of your roster right now. Any injury to Butler would launch him into relevance, but right now he is just someone to play in an emergency.

Jazz Ferguson, WR, Dallas Renegades.  This is a guy we were hoping would break out as a third receiver on the team. The Renegades offense hasn’t been bad with Landry Jones at the helm, but Phillip Nelson really struggles to move the ball. Unfortunately, we are still dealing with Nelson at least one more week, but he did target Ferguson four times in Week 5. Jazz has yet to crack 20 receiving yards, but he has been targeted nine times and caught five balls in the last two weeks. He is an insurance policy on your bench, but Ferguson should be on rosters in most XFL leagues as he has the talent to do more than he has shown so far. Let’s just really, really hope that Landry Jones is a fast healer.

Tyree Jackson, QB, DC Defenders. Cardale Jones threw his seventh interception of the year in the first quarter on Sunday and was immediately replaced by Jackson. He certainly didn’t light up the scoreboard, or even break 50 passing yards, but Jackson at least got the Defenders the win and didn’t make the mistakes that Jones was. Jackson is a big boy at 6’7” and 249 pounds, and he actually can run pretty well for a guy that size. And when you run and you are that big, the defense has a hard time taking you down in space. He ran for 34 yards on seven carries, and brings a little more value there. The Defenders are going to have to find out how to get back to the explosive offense they were in the first two weeks, but it would be hard to imagine Jackson not getting another start. DC really focused on the run last week, which makes Jackson only an emergency start in fantasy.

Khari Lee, TE, DC, Defenders. This is really only if for some reason you need a tight end. Lee is decent, and he is a big ol’ target, but the DC offense has somehow turned into perhaps the worst in the league after scoring 58 points the first two weeks. There is uncertainty at quarterback, but Lee did score his second touchdown of the season. He is very touchdown dependent as he hasn’t had more than three catches or 39 yards in a game this season. However, he does have two touchdowns in five games, and even if the first one came on a trick play, he could help you if you have been dealing with injuries.