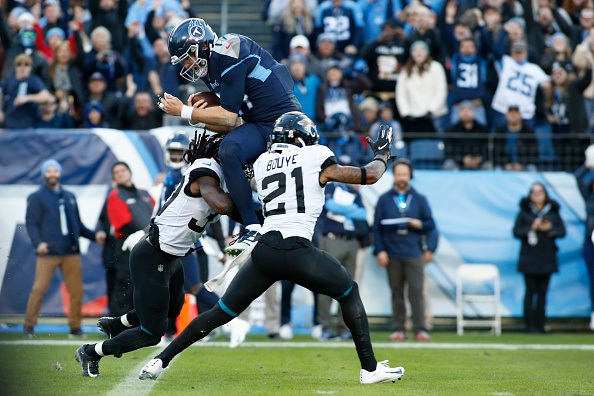 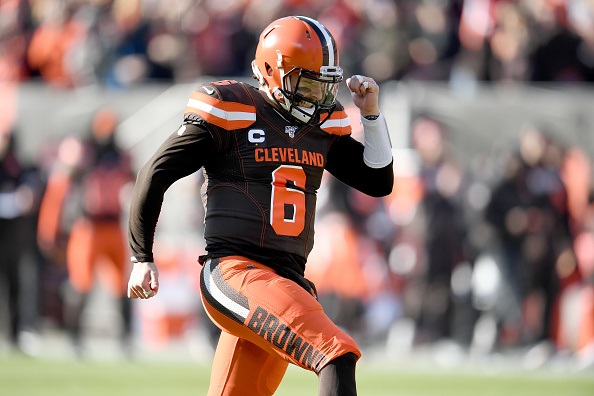 Yeah, that guy who looked like absolute trash and was dropped in many fantasy leagues, he’s the one I’m talking about. However, something happened three weeks ago, and he looks like a new player. Despite playing the Bills and Steelers in two of the last three games, he still has eight total touchdowns in the last three weeks, including three in Week 12 with 300 passing yards against the Dolphins. He faces the Steelers next week who he had three total touchdows against two weeks ago, and then the Bengals and Cardinals after that. He does have the Ravens in Week 16, but he did throw for 342 yards the first time they played. Get on the Baker Bandwagon and get yourself that championship!

Bo Scarbrough is more valuable than David Montgomery ….and maybe even Saquon Barkley

Scarbrough has really come off the practice squad and burst his way on the fantasy scene. In the last two weeks he has 153 rushing yards and a touchdown. He is running hard, and has no competition for carries. He had 18 carries, while Ty Johnson had just four, and he is finally giving the Lions some semblance of a running game. He has fresh legs, and will continue to be successful despite some tough matchups on the schedule. David Montgomery has been an utter disaster this season. He has topped 70 rushing yards just once, and hasn’t been nearly as involved in the passing game as we thought he would be, with more than three catches just once.. He came back too quickly from the high ankle sprain, and has averaged less than 3.5 yards per carry in the last four. He doesn’t have a rushing touchdown in four weeks either. He also has some favorable matchups on his upcoming schedule, and should improve some. He will not be the guy we saw in the first two weeks, and the only thing that likely will make him more valuable than Scarbrough will be his involvement in the passing game. While Scarbrough has one catch in two weeks, Barkley still has 21 catches in the last four games. Purely on points scored from running the ball, it will likely be close for the rest of the season.

Brady and the Patriots offense has fallen apart in the last six weeks. Even with some good matchups against the Jets, Giants, and Eagles, Brady has just five touchdown passes in the last six weeks. In the first five weeks of the year he had ten touchdown passes. He also only has two games over 275 yards. With Aaron Rodgers , it is all or not much. He has more games (six) with one touchdown pass or fewer than he does with two or more touchdowns (five). He also has eight games where he has thrown for under 250 yards. He has 18 touchdown passes this season, and eight of them came in two of the ten games.  Since becoming the starting quarterback for the Titans, Tannehill has had multiple touchdowns in the last five games. He has two 300 yard games, and hasn’t thrown an interception in three of the last four weeks. That is the kind of consistency you want from your starting fantasy quarterback on a weekly basis. He has some really soft matchups coming up on his schedule with the Raiders and Texans, and that should help you get to the fantasy championship.

Darren Waller won’t win you a fantasy championship, but Jared Cook will

The Saints passing game had been looking for another solid option after Michael Thomas and Alvin Kamara and they have found it in Jared Cook . The very talented tight end who was non-existent with Teddy Bridgewater at quarterback, has come alive since Drew Brees has returned. He has scored in four of the last five games (yes, Bridgewater was at quarterback for one of them), and now has six catches in two of his last three games. While Waller was the man in the first seven weeks of the season, he has faded badly since. He has had three or fewer catches in four of the last five weeks, and hasn’t scored since Week 8. His lone good game recently came against the Bengals, which barely counts considering how bad they are. These two guys are trending in completely different directions with Waller struggling to do anything, and Cook being lethal down the middle of the field. Obviously the trade deadline has passed in your fantasy leagues, but you should feel great with Cook, and maybe looking to add another tight end to your team if you have Waller. 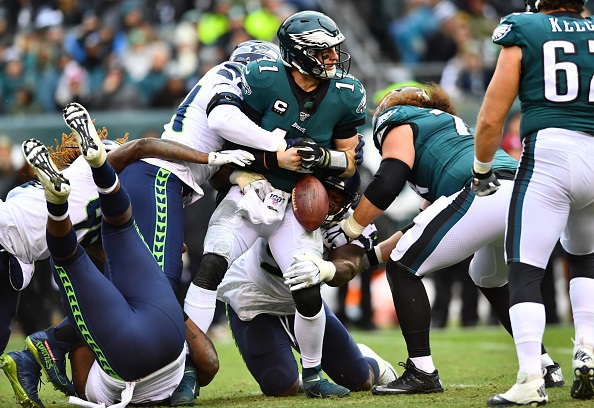 Part of the problem certainly has been the injuries to the Eagles skill players, but Wentz just hasn’t looked good in weeks. He hasn’t had more than a single touchdown in a game since Week 6, and that includes the last three weeks where he has thrown the ball at least 39 times in each game. Alshon Jeffery ’s ankle is a major problem, and with DeSean Jackson out for the season, the rest of the wide receiver options on this team are trash or worse. The schedule does get easier for the Eagles, but he couldn’t even put together a decent game at home against a bad Seattle secondary. Wentz came into the season as a top eight fantasy quarterback, but he isn’t even in the top 15 anymore.

Despite the bad game, Rashaad Penny is still no threat to Chris Carson

After five straight games without fumbling, Chris Carson fumbled on Sunday for the third straight game. He actually fumbled on back to back plays, although one was on the exchange and wasn’t charged to him. This was what the fantasy community that supported Rashaad Penny harped on early on the season, thinking that Penny would get more work. That didn’t happen as Carson has been the workhorse all year. The Penny folks will be back in full force after Sunday’s game with him getting more carries than Carson and doing much more with them. However, if you really look, more than half of Penny’s yards came on two carries, and he wasn’t involved in the passing game at all. Penny might pick up four or five carries a game, but Carson is in no danger of losing a significant amount of work.

When Darnold laid eggs against the Dolphins and Giants, it was starting to debunk the feeling that he would be someone to lean on in the second half of the season with the easy Jets schedule. Darnold has totally turned it around the past two weeks as he has absolutely torched the Redskins and the Raiders. He has averaged over 300 passing yards the past two games with seven total touchdowns. With the Raiders defense playing a bit better of late, there was some question whether Darnold could succeed, but he not only succeeded he dominated. The ghosts are gone, and the mono has clearly passed. He now has the crappy Bengals and awful Dolphins on the schedule the next two weeks and easily could help you to wins as we approach the fantasy playoffs. Depending on how hot he is you might not want to use him against the Ravens and Steelers to finish the fantasy season, but ride this guy while there is still weaklings on the schedule.

It is Chris Godwin or Mike Evans , but never both

Despite the fact that the Tampa offense can be prolific, both receivers have only both scored in the same game once all season. Godwin got off to an amazing start to the season, and when he started to go cold, Evans went bananas for a five week period. They both struggled against the Saints, and then this past week it was Godwin who crushed it for 184 yards and two touchdowns, while Evans cost about a dozen people a pie in the face. It is hard to say why they both have been solid only one game together, considering Jameis Winston has had some massive games. It is so hard to guess which one is going to be the star, but you can almost guarantee it will be one or the other. There has only been the one game where they were both under 70 receiving yards.