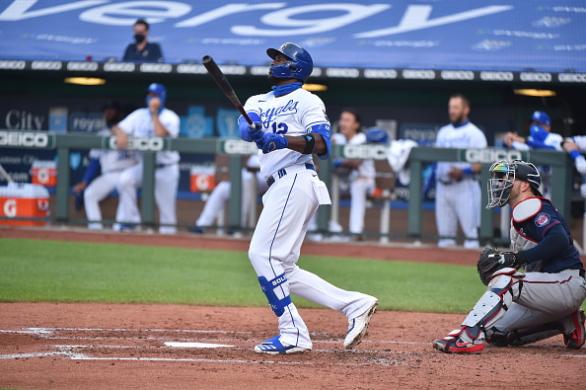 In this week’s Advanced Analytics we’re digging into Expected Weighted On-base Average, or xwOBA. Most of you are familiar with wOBA: Weighted On-base Average, a stat that places progressively weighted values on results. Expected wOBA removes some of the luck of where a ball was hit. Instead accounting for how well it was hit. We can look to see who has been unlucky despite quality contact in this early season. Baseball Savant has an easy to access Expected wOBA leaderboard. Keep in mind that xwOBA, and wOBA for that matter, measure past performance. They may be indicative of future production but are not written in pen.

The xwOBA leaderboard with a 50 PA minimum, sorted by wOBA-xwOBA. 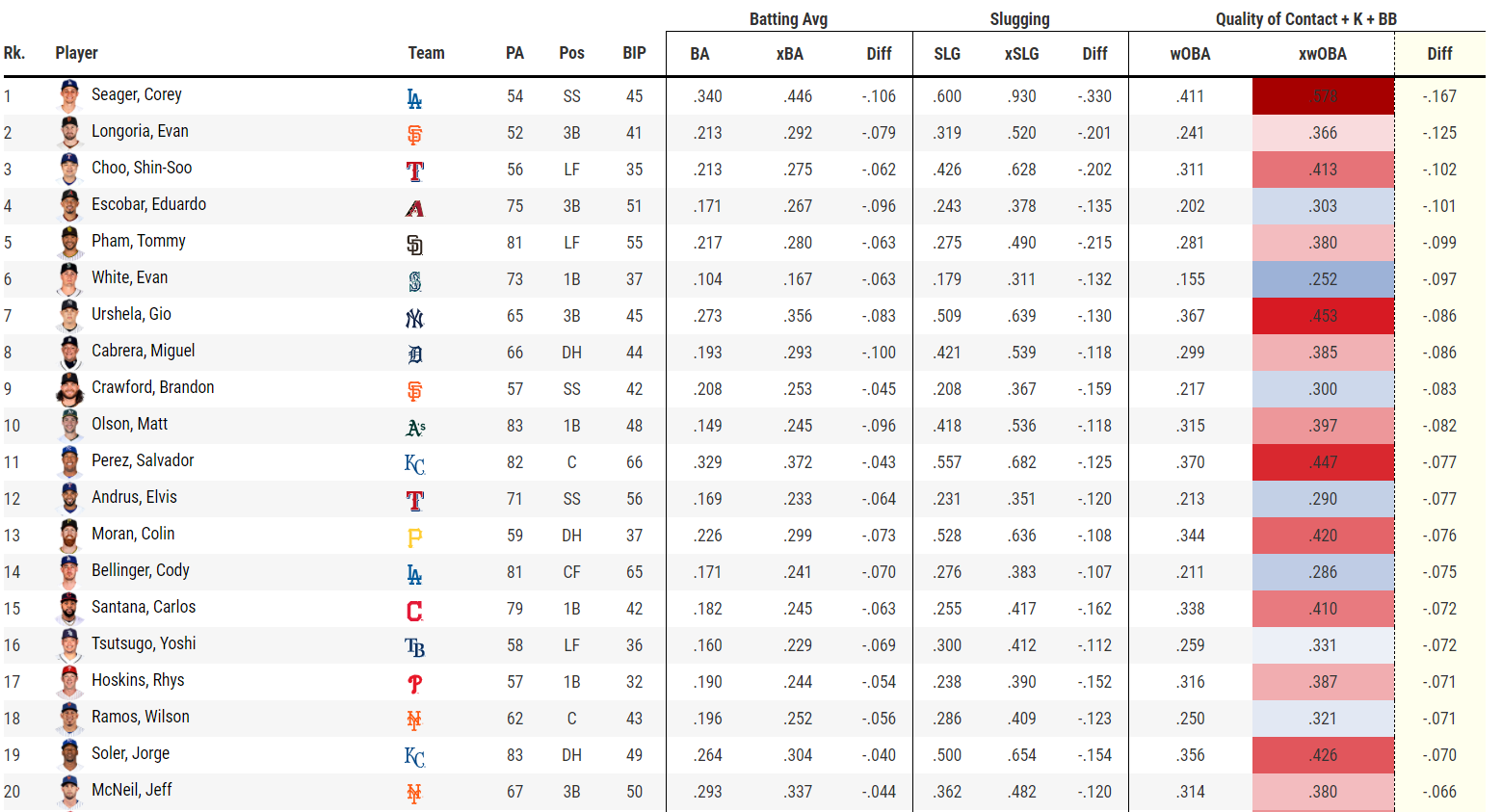 We can also do the inverse and see some potential lucky hitters due to regress. Here’s the xwOBA leaderboard with a 50 PA minimum, sorted by xwOBA-wOBA. 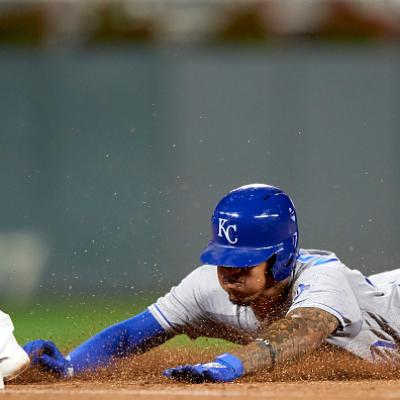 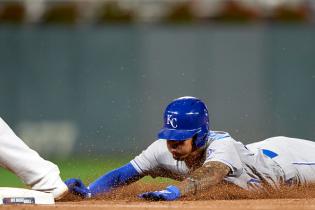 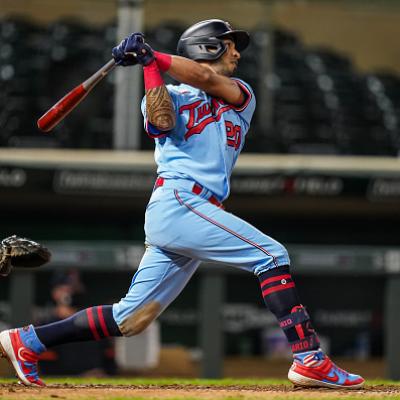 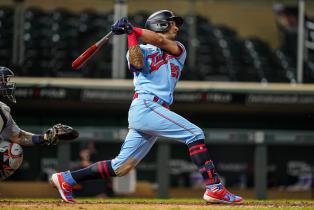 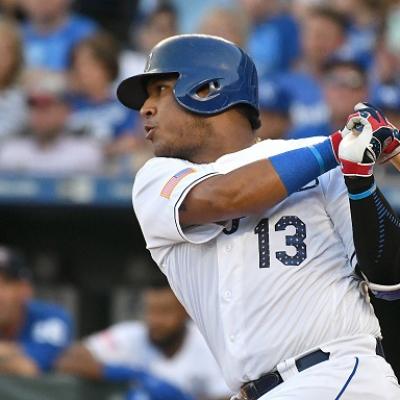 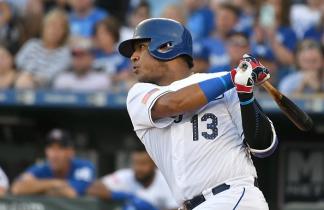 C. Schmidt - SP
NYY
Yankees manager Aaron Boone announced Clarke Schmidt will make his first MLB start Sunday against the Marlins.
With the Yankees lining up their rotation for the postseason, they'll give the 24-year-old a shot to close his 2020 season with a bang. Things haven't gone so well in his first two major league appearances, both in relief, as Schmidt will carry a 7.71 ERA and 2.57 WHIP into Sunday's start. It's hard to recommend him as a streaming option given the uncertainties surrounding the outing -- How stretched out is he? How long will the Yanks let him go? What lineup will the postseason-destined Marlins roll out against him? -- but the talent is certainly there to make a lasting impression heading into 2021.
Added 10:53 am (EST)
Added 10:53 am (EST)

S. Marte - CF
MIA1
Starling Marte is not in the Marlins' lineup for Saturday's game against the Yankees.
After the Marlins punched their ticket to the postseason Friday for the first time in 17 years, Marte and a handful of other Marlins regulars will get a breather Saturday. Others not in the lineup include Brian Anderson, Jesus Aguilar and Corey Dickerson. Monte Harrison is starting in center field Saturday in Marte's stead.
Added 10:40 am (EST)
Added 10:40 am (EST)

J. Odorizzi - SP
MIN1
Jake Odorizzi (blister) has been throwing in recent days and told Twins manager Rocco Baldelli he should be good to go for the postseason.
The Twins don't have a ton to play for before October, so with just a few days left in the regular season there's no reason for Odorizzi to rush back. "With Jake’s chance to give us some innings in the playoffs, we don’t want to use him too much," Baldelli said. "We want to let him heal up." The right-hander went on the injured list on September 18 with a blister on his right hand. Injuries virtually wiped out his 2020 regular season, limiting him to just four starts in which he posted a ghastly 6.59 ERA.
Added 10:33 am (EST)
Added 10:33 am (EST)

L. Arraez - 2B
MIN1
Luis Arraez (ankle) took swings in an indoor cage and was expected to run on the field Friday.
Arraez sprained his left ankle Monday at the Twins' alternate training site, and he's working toward a return in hopes of being ready for the team's Wild Card Series matchup. "I think he’s doing better," Twins manager Rocco Baldelli said. Whether or not he gets well enough to participate in the postseason, the next time we'll see him for fantasy purposes will be 2021. After an impressive debut in 2019, the 23-year-old was much more pedestrian in his 104 at-bats this year, hitting .288/.336/.337 without a home run or stolen base in 30 games.
Added 9:22 am (EST)
Added 9:22 am (EST)

H. Kendrick - 2B
WSH
Howie Kendrick is considering whether to retire after the 2020 season.
“‘Man, do you want to go out like this? Do you want 2020 to be any worse?’” he told reporters Friday during a Zoom call in which he revealed that he had previously intended for 2020 to be his last season. “2020 has been strange, due to COVID and all the other climate going around the country. It is a strange year. And to think you would end on a year like this ... it is a tough one.” Between the abbreviated season and a hamstring injury that cost the 37-year-old a month of the already-shortened year, it's surely not how Kendrick envisioned his final go-round after being a postseason hero en route to a World Series title in 2019. “I want to get healthy first, and talk with my family and then decide,” he said. “Because right now, being hurt, I wasn’t too happy about finishing this way. We’ll see what happens. I don’t want to say yes, and I don’t want to say no. Because right now, I really don’t have an answer.”
Added 9:17 am (EST)
Added 9:17 am (EST)

W. Myers - RF
SD1
Wil Myers was removed from Friday's game against the Giants due to quadriceps tightness.
Padres manager Jayce Tingler said afterwards that Myers had a tight quad coming into the game and it got worse as the game went on, so he was lifted for precautionary reasons. Myers tried to lobby to stay in the game, but to no avail. As of now, it doesn't sound like the injury is serious and Myers should be considered day-to-day.
Added 3:53 am (EST)
Added 3:53 am (EST)

T. Locastro - LF
ARI
Tim Locastro went 3-for-3 with two RBI, a walk and a HBP Friday as the Diamondbacks topped the Rockies 11-5 in the second game of a doubleheader.
The HBP was actually just the fourth for Locastro in 77 plate appearances this year. Last year, he had 22 in 250 plate appearances. Locastro has been a surprisingly productive hitter this year, coming in at .281/.395/.453. There's little chance that he would have maintained that line in an expanded role, but the Diamondbacks still almost surely would have been better off giving him more playing time early in the season; he had just 29 plate appearances through the end of August.
Added 2:22 am (EST)
Added 2:22 am (EST)

T. Clarke - SP
ARI
Taylor Clarke surrendered four runs in five innings Friday, but he still earned a win over the Rockies in the second game of a doubleheader.
The win moved Clarke to 3-0 with a 4.36 ERA in five starts and seven relief appearances. Arizona's preference will likely to bring in one starter this winter, which would allow Clarke and Alex Young to battle for the fifth spot, perhaps with some competition from prospect Corbin Martin. Clarke would probably have the initial edge in that battle.
Added 2:19 am (EST)
Added 2:19 am (EST)