Mike Alexander takes a look at running back workloads from Week 14 of the NFL season and breaks down what it means going forward. 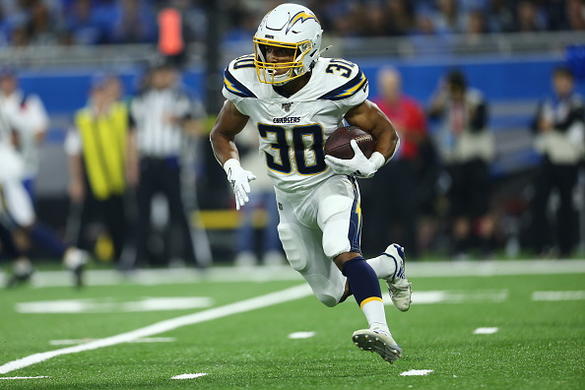 If you’re reading this, I assume you survived the first week of your fantasy playoffs or had a bye. Congratulations on that. Stay sharp and look to add, or block an opponent, on the right backfield pieces this week.

Aaron Jones , RB GB - With Jamal Williams nursing a knee injury Aaron Jones did Aaron Jones things (16-134-1/6-58). It’s so weird how he’s the best RB in football when his usage goes up. I can’t figure it out. No one in the Packers organization can, that’s for sure. Alas, Williams will remain a thorn in our sides until he’s on a different team.

Boston Scott , RB PHI - Remember last week when people argued the Eagles rotation would be at an end since Boston Scott was the only real alternative to Miles Sanders? Guess who played 44% of the snaps? True, Sanders was dinged in-game and visited the locker room. Scott was still in there plenty as the Birds came from behind. Philly. Is. A. Rotation. Always.

Spencer Ware , RB KC - I did not think the backfield mix in...

T. Hilton - WR
IND
Colts OC Nick Sirianni expects "a great bounce-back year" from T.Y. Hilton.
Hilton battled soft tissue injuries in 2019, and he never was able to pull things together with Jacoby Brissett as his quarterback. Hilton claims that his hamstring will be fully ready to go in a "couple days" and that there's no reason to believe he'll be slowed down during the 2020 regular season. His offensive coordinate is equally as bullish. "He’s definitely still the main piece of this offense. T.Y. Hilton is who this pass offense runs through … things will be schemed to get him the football. I know he’s worked hard on his body and worked hard through the offseason. He’s our guy ... If he stays healthy, the sky is the limit, again, for him." Hilton needs to stay healthy to pay off his borderline WR2/3 average draft position, but he could return to every-week WR2 status if things break his way. Hilton is the WR23 in Rotoworld's premium staff rankings.
Added Yesterday 7:44 pm (EST)
Added Yesterday 7:44 pm (EST)

S. Michel - RB
NE1
The Athletic's Jeff Howe said it's "too early to know" if Sony Michel (foot) will be available for Week 1.
Michel's foot surgery paired with Brandon Bolden's opt out are the primary reasons why the Patriots signed veteran RB Lamar Miller on Monday. Bill Belichick continues to hedge against Michel's injury history with Miller's signing and last year's third-round investment in Damien Harris. It's a very crowded running back group, one that is destined to be frustrating for fantasy purposes. Michel already was a fade in all formats, and Miller's presence only confirms that. James White is the highest-ranked Patriots back, but he's only a flex play in PPR formats.
Added Yesterday 7:16 pm (EST)
Added Yesterday 7:16 pm (EST)

A. Isabella - WR
ARI
AZCardinals.com's Mike Gurecki and Craig Grailou report Andy Isabella is "more confident" in his second NFL season.
Every second-year pro should be more confident, but Isabella did struggle catching the ball with his hands throughout his rookie experience so it's a notable nugget. Those issues led to a disappointing year were he only caught nine passes despite little standing in his way on the receiver depth chart. In 2020, Isabella remains the favorite for the fourth receiver spot, one that actually could be of some value given coach Kliff Kingsbury's usage of four-receiver sets. Isabella remains off the radar in most fantasy leagues, but he's a worthwhile flier in deep leagues as someone who is at least athletic and attached to a quality offense. Expect Hakeem Butler to compete with Isabella this training camp.
Added Yesterday 6:07 pm (EST)
Added Yesterday 6:07 pm (EST)

L. Miller - RB
NE
Patriots signed RB Lamar Miller, formerly of the Texans, to a one-year contract.
It's insurance for Sony Michel (foot surgery), who remains on the team's PUP/active list while rehabbing ahead of camp. 29-year-old Miller hasn't stepped foot onto the field since tearing his ACL and MCL nearly one year ago to the day, but his veteran presence is suddenly a roadblock for any Damien Harris offseason hype. Rex Burkhead also loses out as a potential deep league flier since Miller is more than capable of playing on 3rd down. All in all, this is telling news for Michel, who is quietly trending towards opening the year on New England's PUP list (and thus missing the team's first six games).
Added Yesterday 5:33 pm (EST)
Added Yesterday 5:33 pm (EST)

C. Smith - LB
MIN
Vikings waived LB Cameron Smith (heart, COVID-19 list).
Smith doesn't have veteran's rights, so the Vikings are forced to waive him as a procedural move so that he can (presumably) clear waivers and revert to the team's non-football injury list until healthy. Minnesota will still reportedly pay him his $675,000 salary for the season. A fifth-round pick last year, Smith played five games as a rookie and is expected to open the year on injured reserve to undergo open heart surgery.
Added Yesterday 4:20 pm (EST)
Added Yesterday 4:20 pm (EST)

Y. Ngakoue - DL
JAC
NFL Network's Tom Pelissero reports unsigned holdout Yannick Ngakoue has parted ways with his agent.
He'll begin a five-day holding period until he's allowed to hire new representation. Ngakoue has made it clear that he has no plans to sign his franchise tag or report to camp anytime soon, which likely led to this bullheaded development. The Browns and Cardinals have been linked to the 25-year-old, who has said he'll play on the tag elsewhere if need be.
Added Yesterday 3:19 pm (EST)
Added Yesterday 3:19 pm (EST)