Fantasy Baseball Daily Round Up: July 22

Nate Miller goes around the league, giving a daily state of the union for the world of fantasy baseball. He outlines current storylines and gives insight on what to watch for going forward. 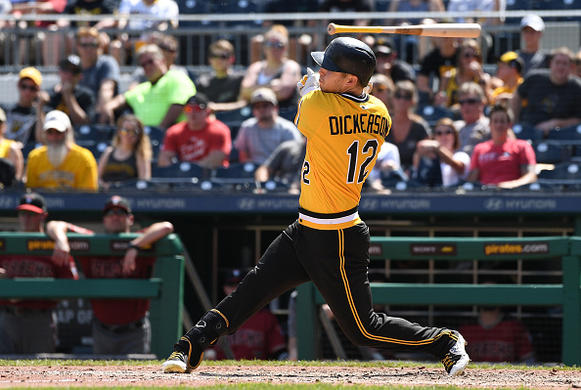 The Pittsburgh Pirates’ playoff chances seemed pretty much nonexistent a couple of weeks ago. Manager Clint Hurdle’s club dropped 12-of-16 from June 19 through July 7, falling to eight games below .500 in the process. Since then, the Buccos have completely turned things around, as they have won 10-of-11 and their eighth straight with a 6-2 victory at Cincinnati on Saturday evening.

Corey Dickerson has been one of the main cogs in the Pirates’ machine during this stretch, putting up an impressive 1.058 OPS with eight extra-base hits across 42 plate appearances. The sixth-year outfielder hit the 99th and 100th home runs of his career in Saturday’s win and has now gone 6-for-16 with four roundtrippers over his last three games.

Dickerson is not the only N.L. Central slugger in the midst of a power barrage. Matt Carpenter homered in both halves of a doubleheader against the Cubs on Saturday, giving him eight deep drives during his current six-game home-run streak. Back on May 25, Carpenter was hitting .200 with only four homers through 44 games. Since then, he has lined up solely in the leadoff spot for the Cardinals and been one of the top producers in the league. Over his last 49 games, Carpenter has crushed his way to a .341/.442/.780 slash line with 21 homers and 17 doubles.

Matt Carpenter JUST DID IT AGAIN!

His 6th straight game with a homer. UNREAL. pic.twitter.com/qESU7OyAM8

On the pitching side, Carlos Carrasco gave Cleveland fans and fantasy owners alike reason for confidence that he’s ready to be at least close to ace-like down the stretch. Carrasco was not bad in the first half, but he did come up short of lofty expectations due to injury and inconsistency. On Saturday night at Texas, the 31-year-old righty gave up two runs on five hits and a walk while punching out eight across 6.2 innings.

Sunday on the Hill

Like Carrasco, José Quintana is another veteran hurler with a track record of success that largely failed to deliver stats worth of his pre-season fantasy draft status during the first half. However, there seems to be reason for renewed confidence in the lefty. Quintana worked 6.0 innings in each of his first two July starts, allowing only two runs combined alongside a 1.08 WHIP. He’ll be on the mound at Wrigley Field against the Cardinals to get his “second-half” started.

Atlanta All-Star Mike Foltynewicz had a tremendous breakout here in 2018, but he labored through two of his weakest efforts of the season heading into the break. The long ball has been the issue for him, as he’s been tagged for four of them over his last 12.2 innings. That’s compared to only six homers allowed across his first 89.0 innings of the campaign. Foltynewicz is getting set to face the Nationals for the fourth time this season. The last time (June 1) he saw the division rival from D.C., Folty turned in basically the most dominant performance of his career; a two-hit shutout with 11 strikeouts.

H. Dozier - RF
KC
Hunter Dozier left Wednesday's exhibition game after being hit by a pitch in his hand/wrist.
Dozier originally stayed in the contest after the knock, but did not take his place in right field in the next frame. This is likely precautionary, but we should have an update on the 29-year-old's status shortly.
Added 7:44 pm (EST)
Added 7:44 pm (EST)

J. Guerra - RP
ARI
Junior Guerra (COVID-19) has returned to summer camp for the Diamondbacks.
Guerra was able to return after testing negative for COVID-19 twice. He had tested positive back on July 5. The 35-year-old is expected to be a big part of the Arizona bullpen after signing a one-year, $2.55 million contract back in December.
Added 6:53 pm (EST)
Added 6:53 pm (EST)

B. Morrow - RP
CHI
Robert Murray, formerly of The Athletic, reports that the Cubs are releasing Brandon Morrow.
Baseball America also has Morrow's release listed in their transactions page. The right-hander was re-signed as a non-roster invite in December, but dealt with a Grade 1 calf tear that kept him from throwing for the final two weeks before the COVID-19 shutdown. The hard-throwing right-hander has dealt with a bevy of injuries in his career, and while this could just end up being a logistical move, it's also possible that Morrow's time with the Cubs is coming to a disappointing end. Jon Heyman of MLB Network reports that Morrow underwent a procedure for a pinched nerve, and does plan on pitching during the shortened 2020 campaign.
Added 6:20 pm (EST)
Added 6:20 pm (EST)

J. Teheran - SP
LAA
Angels manager Joe Maddon told reporters that Julio Teheran might not be ready for the start of the season.
Teheran is currently awaiting results from a COVID-19 test, but is hoping to join the Angels by the weekend. Even if he is able to report at that time, it does sound like because the former Atlanta starter will be behind, he may need a little bit more time before he's ready to join the Los Angeles rotation. While it may result in missing a start or two -- a bigger number than normal because of the truncated season, obviously -- it sounds like he should be there for the majority of the campaign.
Added 6:01 pm (EST)
Added 6:01 pm (EST)