Matt Selz breaks down red zone performances and stats from across the NFL. 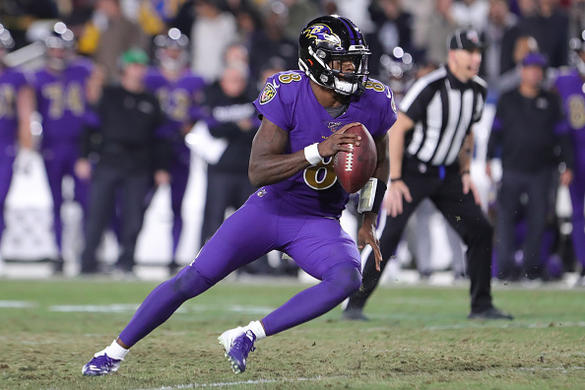 Happy Thanksgiving FA Nation! This is the time of year where we enjoy gathering with friends and family and give thanks for all that we have in our lives. As we gave thanks, let’s look back to who we’re thanking for getting in the Red Zone so often last week with this newest edition of the Red Zone Report.

Lamar Jackson , QB BAL – As Jen Piacenti called him in the Hot Route video this week, he’s clearly an Avenger with all of the Infinity Stones. That certainly was on display on Monday night in L.A. against the Rams when he had 10 passing attempts inside the 20 with half of those turning into touchdowns. The 10 passing attempts were the most by him on the season and more than the last two weeks combined. He didn’t get a rushing attempt in the Red Zone this week, but hey when you’re throwing for five scores, who needs the running game to be working. He’s been the best QB for fantasy this year, and he’s showing no signs of slowing down.

J. Washington - WR
PIT
Steelers activated WR James Washington from the reserve/COVID-19 list.
Washington was on the team's COVID list for less than a week. He's still expected to compete with rookie Chase Claypool (and, to a lesser extent, Diontae Johnson) as the No. 4 receiver. The 24-year-old remains a sneaky Best-Ball selection after he averaged a team-high 84.4 air yards per game as Pittsburgh's unanimous downfield threat last year.
Added 10:31 am (EST)
Added 10:31 am (EST)

C. Davis - WR
TEN
Titans insider Paul Kuharsky reports Corey Davis (active/PUP) had offseason toe surgery.
Having said that, Davis is still reportedly "on course" for the regular season. It's an injury Davis apparently played through last year before finally going under the knife this offseason. Davis isn't an option in most recreational fantasy leagues but this does explain his decline across the board. He's worth hanging onto in dynasty if only for his inevitable change of scenery in 2021 after having his fifth-year team option declined over the summer.
Added 9:13 am (EST)
Added 9:13 am (EST)

K. Vaughn - RB
TB1
Ke'Shawn Vaughn remains on the Bucs' reserve/COVID-19 list.
The assembled Bucs media thought it spotted Vaughn at Thursday's practice, but there has been some kind of disconnect. The third-round rookie is falling further and further behind when it comes to time to put pressure on Ronald Jones, though he does figure to be activated in the near future.
Added Yesterday 6:59 pm (EST)
Added Yesterday 6:59 pm (EST)

M. Stewart - DB
TB
Bucs waived CB M.J. Stewart.
The No. 53 overall pick of the 2018 draft, Stewart's Bucs career was plagued by injury and ineffectiveness. He missed six games with a foot issue in 2018 and five with a knee in 2019. One month shy of his 25th birthday, Stewart's second-round pedigree means he is typically the type of player who would get a second chance, but roster spots are at an extreme premium this year.
Added Yesterday 5:08 pm (EST)
Added Yesterday 5:08 pm (EST)

C. Rogers - WR
IND
The Miami Herald reports free agent Chester Rogers has worked out for the Dolphins.
As has Ricardo Louis. With Allen Hurns and Albert Wilson both opted out, the Dolphins are severely shorthanded at receiver. This is the first we have heard of Rogers since he fractured his kneecap early last December for the Colts. The owner of 111 catches over the past four years, Rogers also offers special teams value as a return man.
Added Yesterday 4:44 pm (EST)
Added Yesterday 4:44 pm (EST)

J. Doctson - WR
NYJ
Jets WR Josh Doctson has opted out of the 2020 NFL season.
Doctson was among a handful of players who opted out just before the 4 p.m. deadline. A former first round pick, Doctson would not have been a fantasy factor this season barring a rash of Gang Green wideout injuries. Doctson played in one game for the Vikings last year after three disappointing seasons in Washington.
Added Yesterday 4:34 pm (EST)
Added Yesterday 4:34 pm (EST)