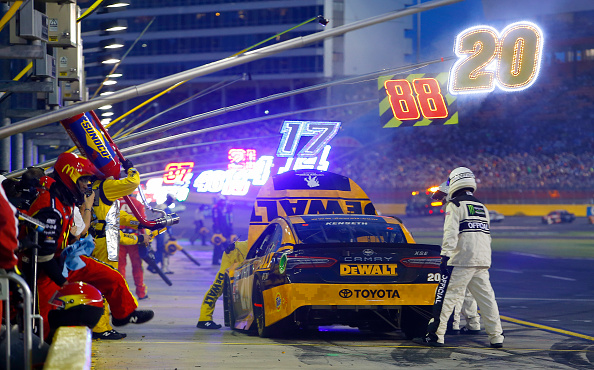 This week is the Cup Series All-Star race at Charlotte Motor Speedway but that doesn’t mean that there aren’t DFS games to play. Both DraftKings and FanDuel have contests for the exhibition race on Saturday night and while there aren’t the same out of drivers listed on both sites currently, they will have all of the drivers racing in the race just as soon as the full field is set about an hour before the race begins at 8:00 pm ET.

The race is being run on the standard Charlotte Quad-oval layout that encompasses 1.5 miles per lap. The four turns are all banked at the same 24 degrees from the apron to the outer wall while the front and back straights aren’t banked hardly at all. While the track is the same as the normal Charlotte races are run on, the length is what’s different. The All-Star race is just 85 laps in length and broken up into four stages of 30 laps, 20 laps, 20 laps, and 15 laps. The first three stages will count every lap run under either green or yellow flags towards the total in that stage but the final stage will only count the green flag laps towards the 15-lap total. There are also unlimited overtime attempts in case of cautions being waved before the checkered flag is taken.

The field has 15 cars in it as of Friday night with as many four more being added on Saturday via the winner of a fan vote and then who wins each of the three stages in the Monster Energy Open, a 50-lap exhibition race held prior to the All-Star race that involves all of the full-time Cup drivers that aren’t automatic qualifiers for the All-Star race. The field was set with a qualifying session on Friday night that involved three timed laps and a four-tire pit stop while coming down pit road at whatever speed the driver wanted to while still being able to get into the pit box properly, so that is why you may see a big gap when looking at qualifying times.

The strategy is a bit freewheeling in this race since it’s a sprint for a $1,000,000 payday and the four stages will surely wreak havoc with pit strategy and shuffle the order quite frequently. So with that in mind, every automatic qualifier will be written up and the top few qualifiers for the Open will as well since they are likely to win a stage and make the All-Star race at large.