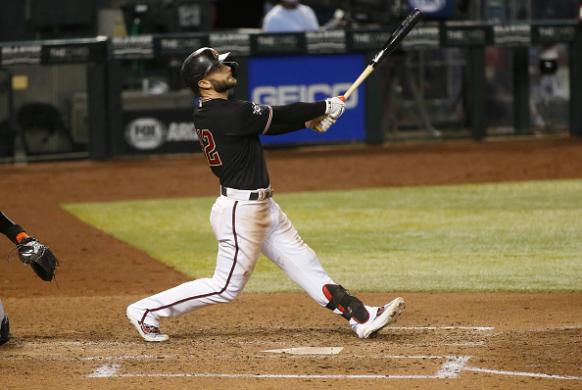 This season has been a complete mess, with constant PPDs due to COVID-19 and players having the ability to opt out at anytime. The A’s are the most recent team to get hit with a positive coronavirus test and we can expect them to be out of action for a couple days, at the very least. All of these things are making this whacky season very difficult for us as fantasy managers, but all we can do is work around it to the best of our abilities. The Stock Watch and Waiver Wire report will be more important than ever this year with the constant issues that we have to work around. Without further ado, let’s dive in!

Christian Walker , ARI 1B – Are people ready to accept the fact that Walker is good yet? People have wanted Kevin Cron to start over him for the last two years and it seems like nobody respects Walker for some reason. He’s extremely underrated. Walker had a breakout and very productive 2019 campaign in which he hit .259 with 29 home runs, 86 runs scored, 73 RBI, and eight stolen bases across 152 games. He has followed that up with a strong start to the 2020 season as he is hitting .299 with four home runs, 19 runs, 21 RBI, and a MLB-leading 13 doubles. He hits the ball hard and the stat cast numbers are backing up his strong start (as you can see below). I think Walker is a GREAT BUY-LOW target because like I said, nobody values him as high as they should.

Sam Haggerty, SEA OF – Haggerty is off to a pretty solid start through 11 games with Seattle, hitting .279 with a home run, six RBI, six runs, and four steals. The four steals are the crucial part here and he’s a perfect 4-4 on attempts, which is pretty impressive for such a small sample of games. Speed is very difficult to come by in fantasy and he is providing the steals that many of you could be searching for. He is also hitting second in the Mariners lineup, which will give him more at-bats and a stronger opportunity to score runs at a decent rate. I wouldn’t expect much in the power department, but he is fast and he had at least 23 stolen bases in three straight minor league seasons (including 49 in 2017), so he’s a good add for those that are lacking in stolen bases for a roto league as you try and make a last season push.

Kenta Maeda , MIN SP – Maeda has been lights-out for the Twins thus far, pitching to a 2.53 ERA, 0.75 WHIP, and 10.1 K/9 through seven starts with his new team. All of which would be new career bests except K/9, which would be his second best (11.0 K/9 in 2018, but 19 of his appearances came as a reliever). Those numbers are supported by a 2.90 FIP and 2.80 xFIP. He has an above-average ground ball rate at 49.5-percent and he has an elite BB/9 of 1.48 (fifth best among qualified pitchers). His .200 BABIP against is a bit concerning but since he also has an elite exit velocity against of 85.6 MPH, it’s less concerning than it would be if opposing batters were hitting the ball hard against him. I expect some regression, but only slightly, and I think he’s actually a better BUY than he is sell.

Francisco Mejía , SD C – This is a tough one. I am a Mejia fan and it sucks to put him in this section, considering he’s not even active right now. He is nearing his return from IL, but with the Padres trading for both Austin Nola and Jason Castro , things are not looking very good for Mejia.  Add to that, the trade for Moreland and there isn’t even a DH spot available for Mejia anymore. You probably cut him loose to the waiver wire when he got the injury and that’s where he should remain unless we see him getting some solid playing time.

Jon Gray , COL SP – Gray has never been an elite pitcher, but he has completely fallen off a cliff this year thus far. He currently has a 5.45 ERA, 1.29 WHIP, and worse of all… a 5.2 K/9. He has 21 strikeouts in 36.1 innings pitched. We are talking about a guy who has been in the big leagues for six years now and his worst K/9 in any season prior to this one was 8.9 his rookie season. In a time where strikeouts are more frequent than ever; where have they gone for you Gray?? He is dead roster space right now and his stat cast page is ugly (as you can see below). Maybe he can rebound in 2021, but it’s way past time to move on from him in 2020.

Casey Mize , DET SP – The number two pitching prospect and number one RHP prospect in baseball got the call a few weeks ago and people were ecstatic and blew large amounts of FAAB on him. While we were expecting a ton of wins pitching for Detroit, we thought we could count on some solid ratios. Simply put, that hasn’t been the case. Really far from it in fact. He has given up three, four (three earned), and two runs in his three starts while not making it past 4.1 innings pitched in any of them. His ERA is currently 6.75 and his WHIP is 1.69. One positive though is his strikeouts, which have remained strong with 13 of them through 10.2 innings pitched. His redraft value is pretty low right now though and it’s hard to envision a turnaround starting in his next outing as he has to face the Twins next.

Justin Dunn , SEA SP – This Mariners rookie (and former top-100 prospect) really struggled through his first four starts, but something seems to have clicked for the young righty as he is coming off back-to-back dominant outings. It started with his outing against Texas in which he fired six shutout innings while giving up just one hit and striking out six. He followed that up with a nearly identical outing against the Angels, six shutout innings, one hit against, and six strikeouts. That second start was more impressive though, as the Angels do major damage against right-handed pitchers. I am not ready to fully jump onboard with Dunn, but I think he’s interesting and he gets to face Texas again in his next start, which will give him a solid chance to keep the momentum going.