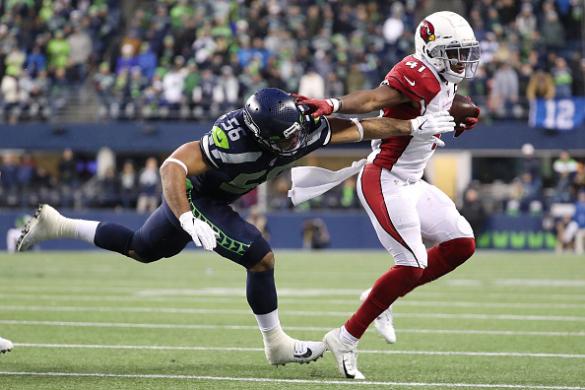 We had our fourth Fantasy Alarm Best Ball draft on RealTime Fantasy Sports last night, so let’s take a look at what went down. We returned to the normal snake draft format for this one after having the auction draft previously. I will breakdown what caught my eye and how I feel about a few teams. The draft board can be found below. 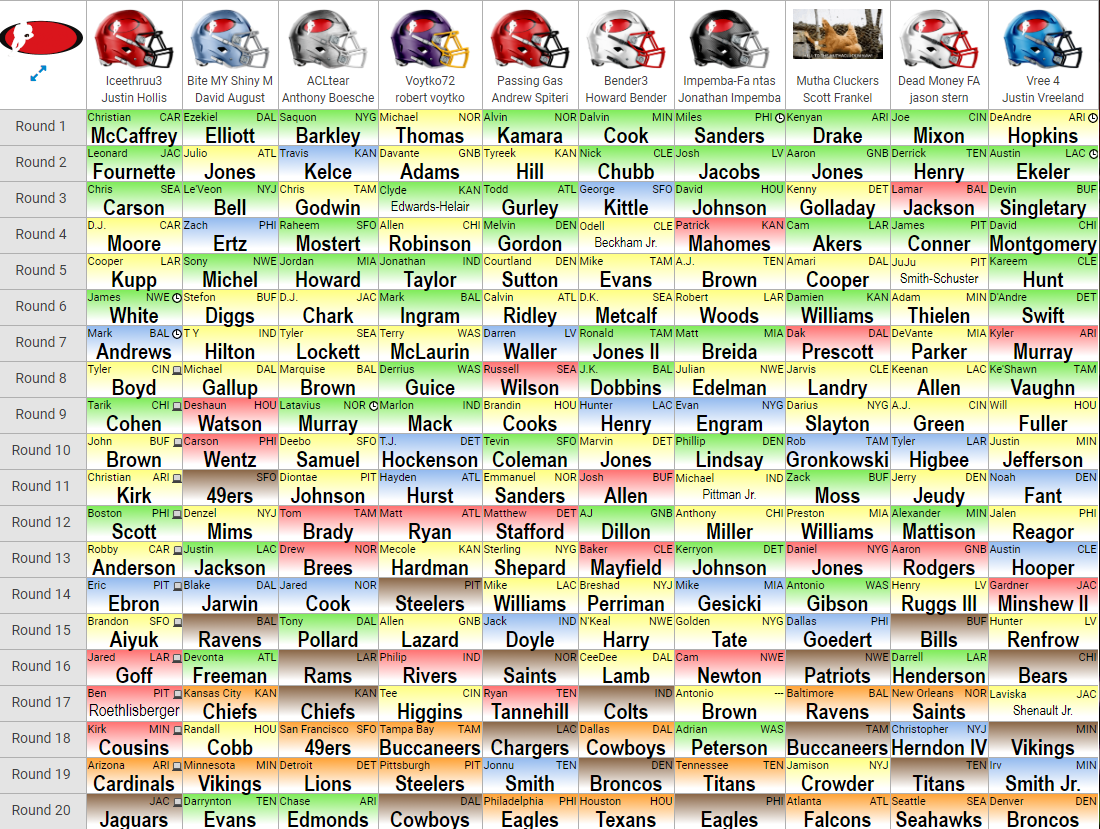 Welp, this draft started in a rough way. My phone was being blown up and I was dealing with that and I didn’t get an alert when my first pick came up… and that meant also missing my second pick. On the bright side, I planned on drafting Kenyan Drake , and he didn’t make it to me anyways. The only change that would have happened would be that I would have taken Derrick Henry over Austin Ekeler , but it is what it is. From there I continued to target my backs, and let me tell you, tenth pick is an awful slot this year. You miss out on the Tier-1 backs. Then, (at least in this one) all the Tier-3 backs were gone too (Leonard Fournette , Chris Carson , Le’Veon Bell, Clyde Edwards-Helaire, Todd Gurley ). Don’t get me wrong, I like Devin Singletary , David Montgomery , and Kareem Hunt , but they aren’t overly exciting me for a best ball league. I don’t mind my tight ends and wide receivers, but they aren’t overly exciting either. I was able to mix it up and get my first draft shares of Hunter Renfrow and Laviska Shenault, both of which I like. Overall, this team is very “blah/meh” and I probably won’t win.

The voices of Twitter really liked Howard’s team, and I can’t argue with that. I will say drafting only five backs is a bit risky, especially when Dalvin Cook is talking about holding out, but as long as Cook plays his team will be in good shape. He’s strong at every position, but his backfield is thin, and any amount of time missed by Cook or Chubb could be the nail in the coffin. I also like Scott’s team, despite being lower on Kenny Golladay and Amari Cooper than most. I feel like it’s got some nice balance and it is strong everywhere except tight end. If Gronk is anything like Gronk of old, Scott will have a really tough team to beat. He made running back and wide receiver positions of strength and still landed an elite fantasy quarterback in Dak Prescott (though I personally prefer Murray over Prescott slightly).

I think this is the first draft where no team really stands out as my least favorite. Most teams have a few picks I like and don’t like. I guess if I had to choose, it would be Voytko’s, simply because I am not in love with that type of draft strategy. However, he did a pretty solid job of making his strategy work. He’s really strong at wide receiver, and if his backs hit, he will do just fine. I do feel as though only going five running backs is risky, especially when one of them is Derrius Guice , who is injured more often than he is healthy. I really do believe any of the teams in this league could finish in the top five; everyone did a solid job.

While no team really stands out as my least favorite, there are plenty of picks that I don’t like. Sony Michel early in the fifth round is a pick that doesn’t make a whole lot of sense to me. Michel is a terrible player, and fantasy player and his value just dropped even further with the Pats signing Cam Newton (another goal line threat). There were a lot of backs on the board that I would take over him. It seems like Miles Sanders is going earlier and earlier in every draft I do, and I am starting to wonder if he will be a top-five pick soon. It still makes no sense to me, based on what we have seen from Doug Pederson.  Lastly, I think Howard made a poor choice gambling on waiting so long to grab Alexander Mattison. How important is a pick like Marvin Jones (when you already have Odell Beckham , Mike Evans , and D.K. Metcalf) to your team when Cook’s threats of holding out are serious. It could easily work out, but it could bite him in the rear end big time.

I don’t love this roster, and I certainly like it a whole lot less than the team I drafted in the previous draft, but overall I think it is okay. We plan on doing plenty more of these, so if you want to get in on the action, follow me on Twitter @JustinVreeland and send a DM my way. I look forward to seeing more of you!

S. Beal - DB
NYG
Giants CB Sam Beal opted out of the 2020 season.
Beal will receive the NFLPA agreed upon salary and is ineligible to return in 2020. Beal spent most of last season on injured reserve with a hamstring injury. He'll be competing for a final roster spot during the 2021 offseason when he returns.
Added 4:54 pm (EST)
Added 4:54 pm (EST)

P. Williams - WR
MIA
Miami Herald's Barry Jackson and Adam Beasley report the Dolphins are "cautiously optimistic" Preston Williams (ACL) will be ready for Week 1.
Williams was cleared for football activities earlier in August, but the team is reportedly taking Williams along slowly, likely because there's no reason to rush him back with the Dolphins still building for the future. In fact, their report says, "There’s no assurance he will be deemed ready for Week 1." Consider Williams questionable for the first few weeks of the season, but when healthy, Williams is an intriguing fantasy asset. He led the Dolphins in targets and receiving before his torn ACL ended his rookie season last year.
Added 4:21 pm (EST)
Added 4:21 pm (EST)

R. Gregory - DL
DAL
Suspended DE Randy Gregory asked the NFL to speed up their reinstatement decision.
Gregory went to social media to indirectly ask commissioner Roger Goodell to make a decision regarding Gregory's 2020 season. He claims to be doing everything right off the field, including getting his mind and body ready for another chance in the league. Gregory notes that the COVID-19 pandemic has hurt his process but hopes that a decision can be made as soon as possible. The Cowboys have "all but given up hope" on Gregory, according to the Fort Worth-Star's Clarence Hill. He'd be a nice addition to a depleted Dallas defense if he can get cleared.
Added 3:59 pm (EST)
Added 3:59 pm (EST)

S. Diggs - WR
BUF
Bills restructured Stefon Diggs' contract.
Buffalo will give Diggs $3.3 million more in 2020 while reducing some of his salary in the later years of his contract. It's an insignificant move for Diggs' short- and long-term outlook with Bills. For fantasy purposes, Diggs needs to get better deep-ball accuracy out of Josh Allen to reach his ceiling. They've been working together this offseason -- that, of course, includes playing video games together -- and expect to have chemistry in 2020 despite limited in-person practices. Diggs will likely be a fantasy WR3 who has a handful of boom and bust weeks. Stacking Allen with Diggs has been a common strategy in bestball formats this summer.
Added 3:50 pm (EST)
Added 3:50 pm (EST)

E. Cleveland - OL
MIN
Twin Cities' Chris Tomasson reports second-round OT Ezra Cleveland is a candidate to start at right guard.
Cleveland received first-round buzz throughout the 2020 NFL Draft process after posting two-straight first-team All-Mountain West honors at Boise State. He also showcased 91st-percentile athleticism at the underwear olympics in Indianapolis. Given the offseason, Cleveland may be better off inside at guard instead of being put on an island against the league's best pass-rushers. Cleveland still has long-term upside at left tackle.
Added 3:37 pm (EST)
Added 3:37 pm (EST)

K. Brice - DB
CHI
Cardinals signed S Kentrell Brice, formerly of the Packers, to a one-year contract.
Brice needs to pass a physical and the COVID-19 testing, but assuming that happens, he will be projected to make the roster as a depth piece in a secondary that struggled defending the tight end in particular last season. Brice needs to showcase special teams ability to guarantee a spot on the roster.
Added 3:25 pm (EST)
Added 3:25 pm (EST)

L. Bell - RB
NYJ
Jets coach Adam Gase said Le'Veon Bell is "extremely motivated" and is in "phenomenal shape."
Gase and Bell haven't exactly seen eye to eye, so the fact that Gase is this supportive of his back carries some weight. Gase also said Bell has "been working extremely hard and he looks really good." This lines up with The Athletic's Connor Hughes report that Bell has been "training like a mad man" this offseason. Bell needs to get back on track in 2020 after missing the 2018 season and then only averaging 3.2 yards per carry last year. The additions to the offensive line and Bell's offseason work outs suggest a bigger year could be in store for Bell, who is being viewed as a low-end RB2 in fantasy drafts. Bell projects for another 300 touches, but it may not matter much if the Jets offense doesn't improve in general.
Added 3:14 pm (EST)
Added 3:14 pm (EST)