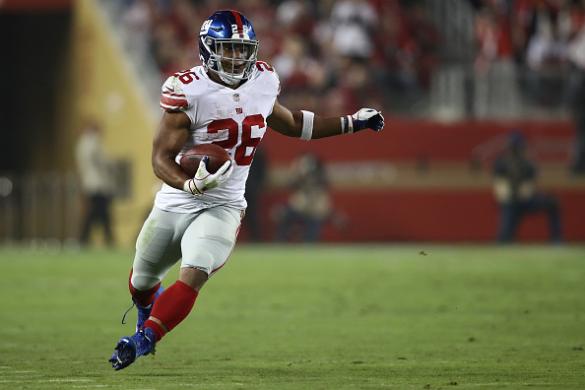 We had our third Fantasy Alarm Best Ball draft on RealTime Fantasy Sports this past Saturday, but this it was an auction draft. As always, auction drafts can be very interesting with a lot of prices that seem weird. It is important to remember though that in auction drafts, timing can determine the price of players just as much (or more) than the talent of the players. I will breakdown what caught my eye and how I feel about a few teams. The draft board can be found below. 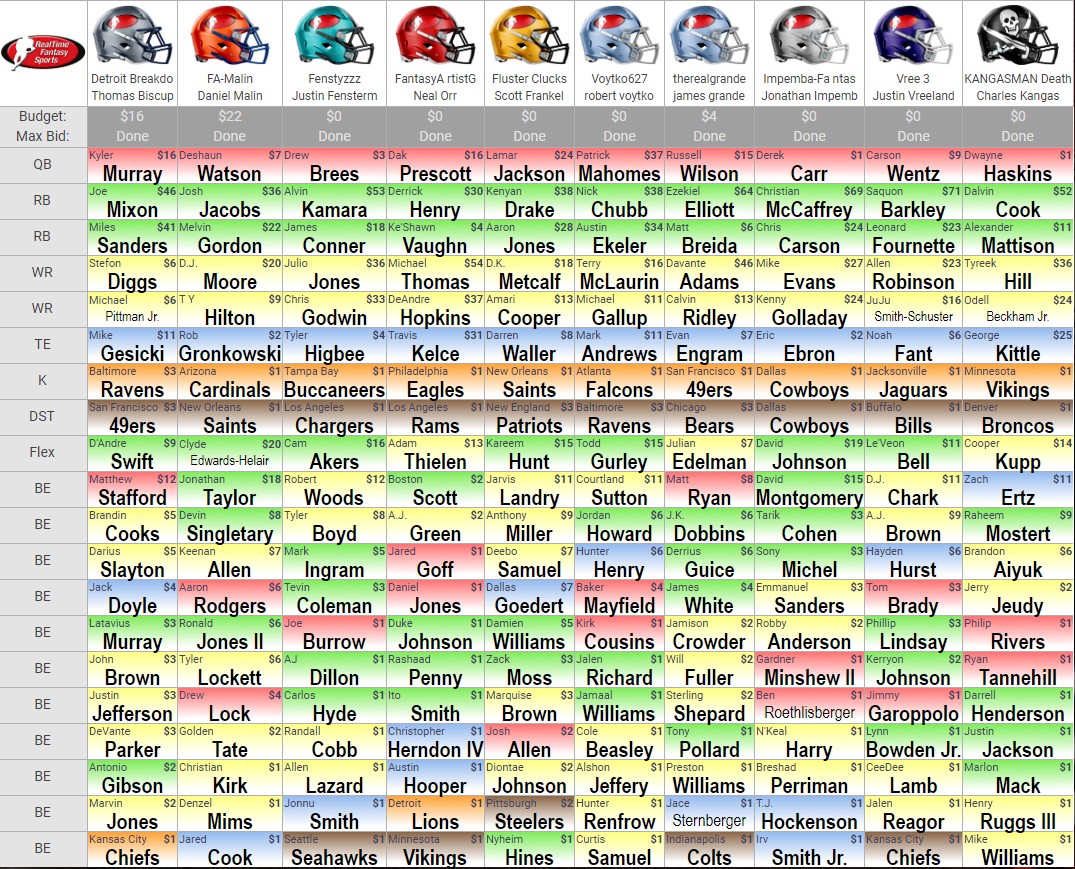 I love how my team turned out and it’s easily my favorite team through three drafts. I was finally able to land a group of running backs that I feel good about, with Saquon Barkley , Leonard Fournette , and Le'Veon Bell . The best part about it too is that I still love my WR core with Allen Robinson , JuJu Smith-Schuster , D.J. Chark , and A.J. Brown and the two upside rookies I have been targeting in CeeDee Lamb and Jalen Reagor. I was also able to land two young tight ends that I feel good about in Noah Fant and Hayden Hurst . They probably won’t be consistent this year, but in this best ball format that is fine as long as they have enough high scoring weeks. Quarterback is probably my weakest spot, but I feel good about the combination of Carson Wentz , Tom Brady , and Jimmy Garoppolo for this best ball format. I tend to go two quarterbacks in these drafts normally, but I decided to go with three this time for two reasons; the first being that I did not land any of the elite fantasy QBs and the second being that Wentz has missed time with injury and Brady will be 43-years old and has no mobility anymore. I think I drafted very well and feel good about my chances.

The voices of Twitter also liked my team and their three favorite drafts were mine, Fensty’s, and Scott’s. My thoughts are right in line with Twitter, as I would rank those as the top three as well. I also think Neal did well, but I personally don’t love trusting guys like Ke'Shawn Vaughn and Boston Scott to be my RB2 and RB3. However, his strength at WR and TE should keep him in contention. Moving over to Fensty, he drafted a very balanced team with a strong focus at RB and WR. I don’t like his TE pair at all and I think that could keep him from winning. Moving over to Scott’s team, I really like his roster, it’s balanced, and he has a strong pair of running backs while also landing Lamar Jackson at a much cheaper cost than Patrick Mahomes .

If you are going to have favorites, you have to have least favorites. I won’t pick on anyone too much, but for me it comes down to three teams, Biscup, Malin, and Kangas. I didn’t get a chance to talk to Biscup, so I am not sure how he feels about his roster, but by now I think everyone knows I don’t love this price on Miles Sanders. I am also not a big fan of his wide receivers or tight ends. He left money on the table (never want to do that) and spent $12 on a backup QB. Moving over to Malin, he was unable to attend due to something that came up, but I don’t care for the team that the auto-drafter came up with. It’s a pretty deep roster, but it lacks top-end firepower. The balance should keep him from finishing at the bottom, but the lack of elite talent will keep him from winning. As for Kangas, I know he doesn’t care for his team either, as he said “I hate my team and I did it to myself.” After he landed Dalvin Cook , the rest of the draft room forced him to overpay on Alexander Mattison. He got caught trying to drive up the price on George Kittle and ended up getting him, which resulted in $36 being spent at tight end. His RB depth is rough, as he really only has Cook and Mostert. His quarterbacks lack much upside. I’ll cut him some slack though; this was a tough room to draft against.

Let’s move over from best/worst teams to best/worst values. The best values (in my opinion) are $8 for Devin Singletary , $11 for Le'Veon Bell , $9 for A.J. Brown, $7 for Deshaun Watson , $7 for Keenan Allen, $6 for Tyler Lockett , and $3 for DeVante Parker . Finding good values in auction drafts is extremely important. As for me, after spending a hefty $71 on Barkley, landing Bell and Brown at cheap costs was a perfect way to balance things out.

Moving over to the dreaded worst values (again, in my opinion) we have $11 for Mattison, $11 for Mike Gesicki , $12 for Matthew Stafford , $9 for Anthony Miller, $37 for Mahomes, and $6 for Michael Pittman Jr. Overspending in auctions can really hurt your roster and sometimes letting go can be very important. You have to understand when a player’s price has exceeded his value and that it is time to let him go.

I find it very interesting that in this auction draft, people constructed their rosters very different from what we have seen in our normal drafts thus far.

This has easily been my favorite team so far and hopefully the upward trend continues in the next one.  We plan on doing plenty more of these, so if you want to get in on the action, follow me on Twitter @JustinVreeland and send a DM my way. I look forward to seeing more of you!