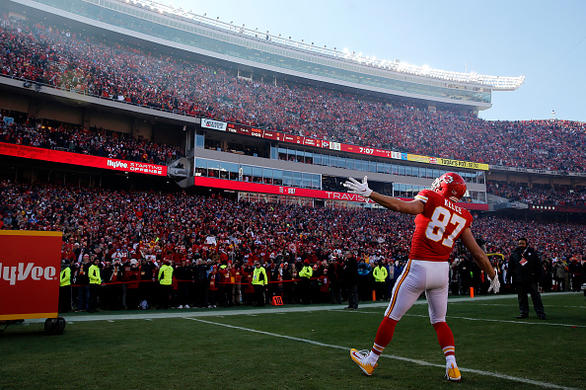 We had our second Fantasy Alarm Best Ball draft on RealTime Fantasy Sports this past Tuesday and it was another fun draft! I will breakdown what caught my eye and how I feel about a few teams. The draft board can be found below. 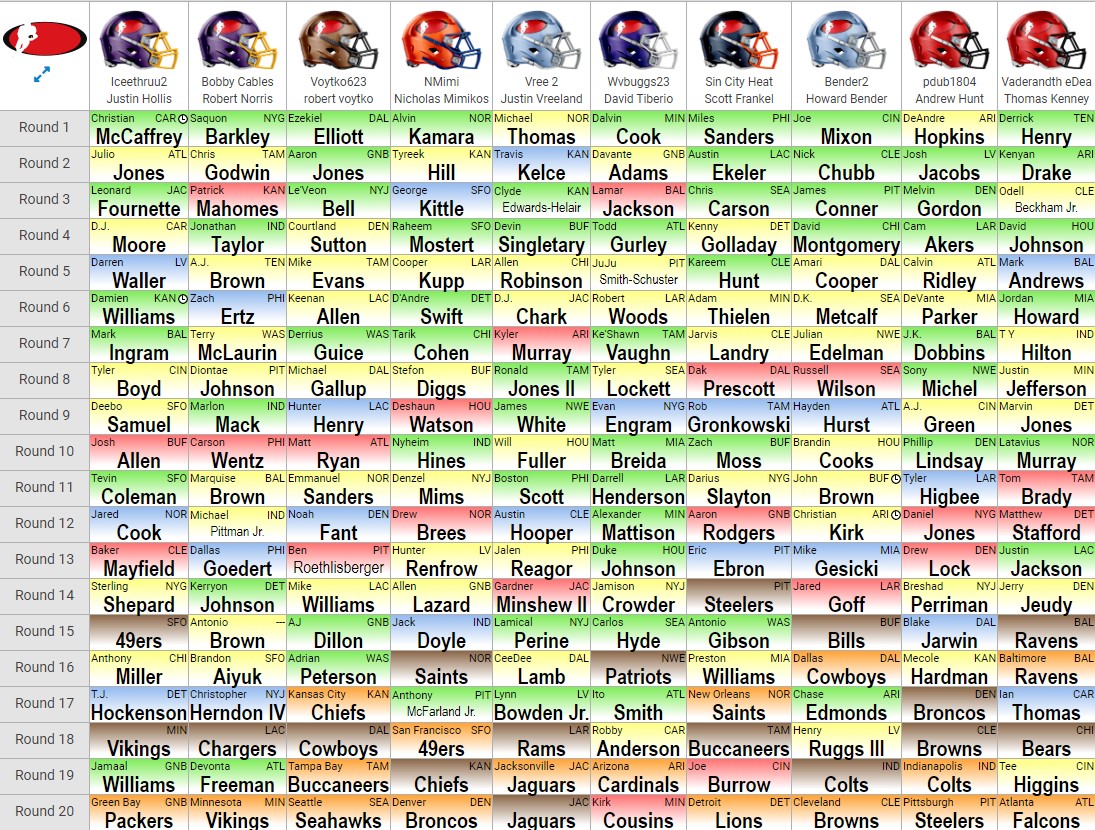 I once again do not like how my running backs turned out. I can now say with certainty that the draft position I want is in the top three. I don’t want someone like Miles Sanders in the first round. I could have gone Dalvin Cook , but I don’t draft holdout guys, so I end up going Michael Thomas . On the way back, I felt like Travis Kelce was the best choice, and just like that, I was going with a weak group of backs again. That being said, I view wide receiver, tight end, and quarterback all as positions of strength for me on this roster and I feel good about my chances. Adding Allen Robinson and D.J. Chark with Thomas, gives me a strong group of WR and Kyler Murray ’s ceiling is through the roof.

I love a few of my late picks. Jalen Reagor is a great value in my opinion; I think he will lead all Eagles WRs in fantasy points and he can be drafted so late. The Eagles are a pass-first offense and Reagor is explosive. He had to deal with poor quarterback play at TCU, but he won’t have that problem with Carson Wentz throwing him the football. I have now taken Gardner Minshew as my backup quarterback in back-to-back drafts. Both times, my target was Drew Lock and both times he was taken before my pick. I like Minshew though and I don’t mind having the pairing of him and Chark. CeeDee Lamb may be below Cooper and Gallup in the pecking order, but I think his talent is ridiculous and he will have some big explosive weeks this year, which makes him a perfect target late in best ball drafts. Lynn Bowden Jr. is a late round sneaky pick for me. I’m not entirely sure of what role he will have, but he is a freak and he should be able to make plays and have some strong weeks. I think Lamichal Perine was an underrated back in the draft and I view him as the guy the Jets would go to if Bell were to be traded or get injured.

In our first Fantasy Alarm Best Ball RTFS draft, there appeared to be a clear-cut best draft, but I don’t really see that with this one. Some of my top teams on paper though are Voytko’s, mine, and the one and only Howard. I am not a big fan of the Sutton pick for Voytko and I don’t know why he took three kickers, but overall his team looks really strong and doesn’t really have any holes. I love his running back group. As mentioned, I don’t love my running back group, but I believe I am elite at three positions. Howard locked up his backfield early, but I still like how he did at other positions. I love Hayden Hurt this year and you can’t go wrong with Russell Wilson . I wouldn’t be surprised if it comes down to those three teams.

On the flip side of that, if I had to choose a least favorite, it would probably be Andrew’s team. I am sure he will go on to win the league now, but I just don’t love it on paper. Not a big fan of Josh Jacobs at 12, over some of those other backs. I don’t like Melvin Gordon at all and I am lower on him than probably anyone else. Lastly, it appears he will be pretty weak at both quarterback and tight end.

My biggest head-scratchers of the draft though are Voytko’s choice to select three kickers and David’s choice to select just one tight end. I believe Voykto made a simple mistake and meant to select two defenses and two kickers. As for David, having just one tight end is a very bold strategy, especially when it’s Even Engram, who missed eight games last season and five games the year before that. Hopefully it works out for him, but that seems like too big of a risk for me.

While I like this team a bit more than the first, I still feel like there is room for improvement. We plan on doing plenty more of these, so if you want to get in on the action, follow me on Twitter @JustinVreeland and send a DM my way. I currently have openings for an auction draft taking place this Saturday. I look forward to seeing more of you! 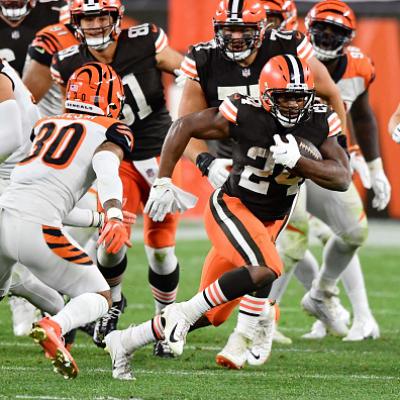 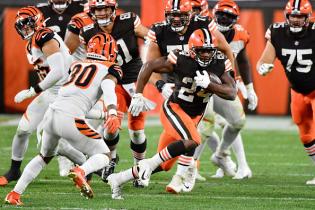 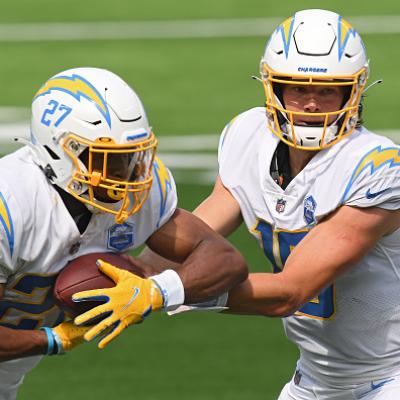 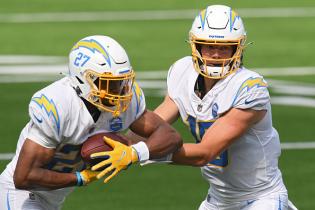 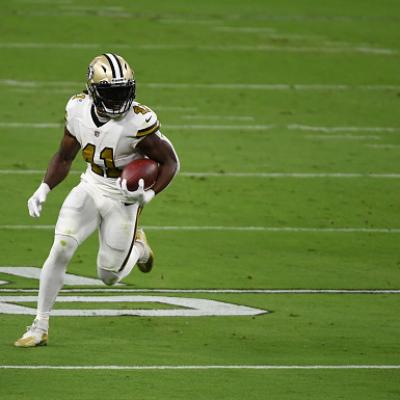 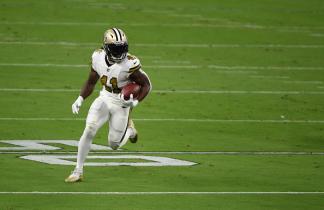 A. Jeffery - WR
PHI1
Eagles WR Alshon Jeffery (foot) could return in the next few weeks.
NBC Sports' Reuben Frank reported that Jeffrey, recovering from offseason foot surgery, won't be back for Week 3 or Week 4, but could return to the team's lineup soon thereafter. The veteran wideout has yet to practice, though he was "doing some footwork drills on the sideline as his teammates" this week in preparation for the Bengals, Frank said. With Jalen Reagor out until November, Jeffrey could fall into target volume as soon as he returns. He's worth a bench stash in deeper fantasy formats.
Added 8:55 am (EST)
Added 8:55 am (EST)

M. Brown - RB
LA1
Malcolm Brown (finger) was held out of practice on Wednesday.
Adam Schefter previously reported that Brown is expected to play this Sunday against the Bills, but our first chance to see a practice report shows that Brown is sidelined. A "minor" surgery was necessary to repair a fractured pinky. Fellow running back Cam Akers also missed practice with a rib injury, making Darrell Henderson the only fully fit ball carrier on the roster.
Added Yesterday 9:05 pm (EST)
Added Yesterday 9:05 pm (EST)

C. Akers - RB
LA1
Cam Akers (ribs) did not practice on Wednesday.
Akers was removed from Sunday's game after just three carries. Coach Sean McVay classified Akers' injury as "day-to-day," but seeing a DNP designation on the first injury report of the week does not evoke optimism ahead of Sunday's game against the Bills.
Added Yesterday 7:29 pm (EST)
Added Yesterday 7:29 pm (EST)

J. Jeudy - WR
DEN1
Jerry Jeudy (ribs) was limited in Wednesday's practice.
Jeudy is now the Broncos' top wide receiver with Courtland Sutton sidelined for the season. Through two games, the rookie has caught 8-of-15 targets for 118 yards. It remains to be seen how much the offense will change over the next few weeks with Jeff Driskel at quarterback, but rolling with Jeudy as a FLEX option is understandable.
Added Yesterday 6:44 pm (EST)
Added Yesterday 6:44 pm (EST)

S. Miller - WR
TB1
Bucs WR Scotty Miller (hip/groin) was limited in Wednesday's practice.
In a game where he was expected to see an expanded role with Chris Godwin out, Miller received just three targets and 11 total yards. Perhaps this injury explains the performance. Godwin is on track to return in Week 3 against the Broncos.
Added Yesterday 6:38 pm (EST)
Added Yesterday 6:38 pm (EST)