Justin Vreeland surveys the fantasy football world and examines whose stock is rising and whose is falling after Week 13. 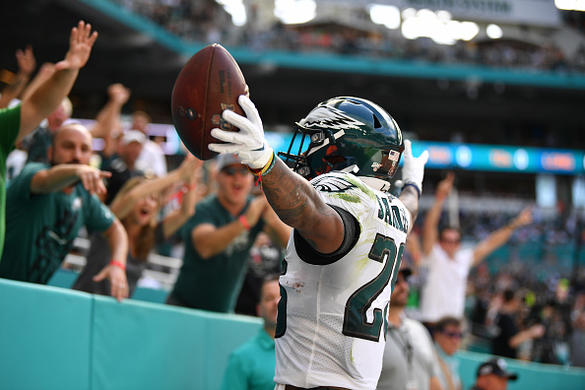 Happy Stock Watch day! Week 13 is in the books and playoffs start for most of you/us this week. If you are reading this you probably made playoffs, so congratulations! Hopefully a title is in your near future! If you missed playoffs and just wanted to give it a read, that’s awesome too and I appreciate it! Feel free to shoot me feedback or anything else in the live chats or on Twitter @JustinVreeland. Without further adieu, let’s dive in!

DeVante Parker , WR MIA – This guy is for real. Everyone should know that by now, but man was he impressive against the Eagles. He made several contested grabs over defenders that you could categorize under the “you got mossed” section for the CBs that were covering him. He finished the game with seven receptions for 159 yards and two scores, good for 34.9 fantasy points. He has now reached double-digit fantasy points in nine straight games and has scored north of 15 points in six of those (including three straight). He and Ryan Fitzpatrick are completely on the same page together right now and have formed a very strong chemistry. At this point, I don’t see how you can consider Parker as anything but someone you lock into your starting lineups on a weekly basis. Despite having totaled less than 20 fantasy points in his first three games combined, Parker currently ranks as the number 20 wide receiver in fantasy points this season. Oh, and he has the Jets, Giants, and Bengals on tap the next three weeks.

Miles Sanders, RB PHI – Sanders had the best game of his young career on Sunday, rushing 17 times for 83 yards and hauling in five passes for 22 yards and a score. That was a new career high in carries, rush yards, and total touches. It was also the second highest fantasy scoring game of his rookie season as he finished with 21.5 points (slightly less than the 22.8 he scored in Week 8). That gives him back-to-back games with at least 60 rushing yards. He has shown the ability to be the lead back with Jordan Howard out. That being said, if Howard is able to return in Week 14 it will really hurt Sanders’ value, but the Eagles do have a great matchup with the Giants. If Howard is out, you can feel great about using Sanders in seasonal leagues and he will once again be an intriguing DFS option.

Jack Doyle , TE IND – Doyle chalk week worked out well for anyone who took advantage of it (as did the Higbee chalk). The Colts pretty much had no other option, outside of Zach Pascal , so Doyle was fed 11 targets. He hauled in six of them for 73 yards and a touchdown. That was a season high in targets, receptions, and yards for Doyle. With Ebron done for the year, Doyle will continue to get rock solid volume, but it will likely be a good bit less than this when T.Y. Hilton makes his return. That being said, Doyle can be trusted in a matchup with the Bucs in Week 14. The Bucs still have a terrible pass defense, despite that awful performance Foles had against them this past week, I digress. Brissett has a lot of trust in Doyle and you can too.

Jimmy Garoppolo , QB SF – People put way too much weight into Jimmy G’s strong performances against the Cardinals, for some reason, and have completely ignored that he has been terrible in just about every single game against other teams. He finished with just 9.1 fantasy points against the Ravens this week, his fifth game with fewer than 12 fantasy points. This isn’t someone that should really even be rostered in fantasy, let alone be in starting lineups. He has a tough matchup with the Saints in Week 14 and there’s no reason to expect a big performance in that one. The 49ers want to grind you out with a lot of rushing and Jimmy G lacks explosive plays.

Jamison Crowder , WR NYJ – While we were willing to dismiss his two catch, 18 yard performance in Week 12 against the Raiders as just a bad game, we can’t ignore this ugly game against the Bengals. He finished with two receptions for eight yards on NINE targets. How on Earth can you finish with 2.8 fantasy points on nine targets?! And it came against one of the worst defenses in football. Oof. That’s two poor games in a row against bad defenses. Robby Anderson has emerged as Darnold’s best target in the passing attack and Crowder’s value is dropping quickly. The one thing working in his favor is that the Jets have another fantastic matchup in Week 14, as they will take Miami. Given the matchup and the fact that he still had nine targets, he isn’t the worst option in the world, but it certainly seems riskier to play him now than it did a few weeks back.

Aaron Jones , RB GB – If I am remembering correctly, this is the third time that he has been included in this piece. Once as a stock riser, and now twice as a stock faller.  He has been incredibly boom-or-bust this year, and lately it’s been more bust than boom. Over the last four games, he has three games with fewer than 7.2 fantasy points, and in two of those games he had less than four points. The return of Davante Adams made Jones a complete non-factor in the Packers passing attack, and he isn’t getting anywhere near enough volume to be productive right now. Despite that, you still have to roll him out in Week 14 against a poor Redskins rush defense. However, they did a good job against CMC and this will be far from a lock for Jones. He hasn’t topped 13 carries since Week 5 and he is losing a ton of work to Jamaal Williams .