Fantasy Baseball Daily Round Up: July 20 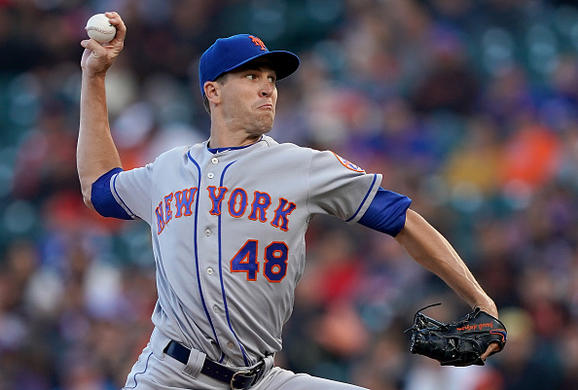 Jacob deGrom takes home spotlight honors with a dominating performance in a no-decision against the Giants. Today was a tough pick, as Leake and Lavarnway were also options, but I don’t want to hold not getting a win against deGrom. After all, it’s not his fault the offense can’t ever score runs for him. He pitched seven shutout innings in the gem, giving up just three hits while striking out 10. It was hit sixth double-digit strikeout game and seventeenth game with at least six punch-outs. It was his eleventh straight start with at least five innings pitched AND fewer than three runs against. In that span, he has a 2-2 record, despite a 2.31 ERA. The reigning NL Cy Young award winner will carry a 5-7 record and 3.02 ERA into his next start.

Ryan Lavarnway made his first big league start of the year and he went out and had the top hitting performance of the day, going 3-4 with a pair of dingers, a walk, three runs scored, and six RBI. What a way to return to the MLB! No, he is not someone to consider in fantasy.

New Red Ryan Lavarnway hits his second homer of the night to give him a career-high 6 RBI. It is the second multi-homer game of his career. pic.twitter.com/skgPAnQtOW

Asdrubal Cabrera went a perfect 3-3 and had the only bash-and-dash game of the day. The home run was a solo and he also walked and doubled. The home run was his twelfth of the year and the stolen base was his fourth to go along with 46 RBI and a .231 batting average.

Oscar Mercado went a perfect 5-5 with a double, two RBI, two runs scored, and a stolen base in the Indians 10-5 win over the Royals. It was his first career game with more than three hits. He is having a very strong rookie campaign, hitting .299 with seven home runs and nine stolen bases across 51 games played.

Christian Walker only had one hit, but it was a two-run dinger and he also walked twice. Walker’s fantastic first season as a regular starter continues, as he is now hitting .259 with 19 home runs, 48 RBI, and six stolen bases. Most years he would be in the thick of the NL ROY conversation, but not so much this year with Alonso doing what he is doing.

That's a natural cycle for the #Dbacks in four straight at-bats! pic.twitter.com/uY7TNCO5pi

Adam Haseley homered for the second straight night and he also doubled and had two RBI. Through his first nine career games at the MLB level, he is hitting .250 with two home runs, three doubles, and five RBI. Deeper leagues may want to take a shot on him, especially since he will be a regular in the Phillies lineup with the recent injury to Bruce.

Daniel Vogelbach had the only other double-dong outing, finishing 2-4 with the two home runs and six RBI. The batting average has dropped down a good bit, as he is now hitting .239, but the power continues as he now has 23 home runs and 57 RBI. He has been a pleasant surprise for Seattle.

.@DanielVogelbach is the first @Mariners player with multiple 6 RBI games in a season since ...@AROD in 2000. pic.twitter.com/mWIEjJCGC3

Vlad Guerrero Jr. had a nice night at the dish, going 3-5 with three runs scored and a RBI. It was his seventh game with three hits and his third game with three runs. Despite the stong game, it’s been a pretty slow start to his career, now hitting .245 with eight home runs and 27 RBI through 68 games played.

Teoscar Hernández went 2-4 with a home run, a walk, two runs, and two RBI. The power surge continues as he now has four home runs in his last four games and five home runs in July. He is still only hitting .209, so his 12 home runs and 34 RBI aren’t very impactful for fantasy purposes, but he is an interesting played in DFS right now. 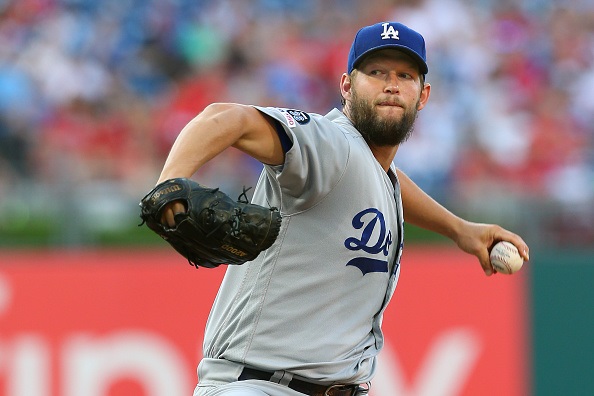 Clayton Kershaw (8-2, 3.00 ERA) will take on the Marlins in what should be a good match-up for the veteran lefty. He has given up just two earned runs across 13 innings in July while racking up 16 punch-outs. He will probably be very chalky tonight in DFS cash games.

Luis Castillo (9-3, 2.41 ERA) will take the hill against the Cardinals. Castillo has given up four earned runs across his last 20.2 innings pitched while striking out 25. He has at least six strikeouts in 16 of his 19 starts this year and has been very consistent.

Mike Soroka (10-1, 2.24 ERA) will take on the Nationals in Atlanta. Soroka had a career high nine strikeouts across seven shutout innings in his previous start. He has pitched at least five innings AND given up one or fewer runs in eight of his 16 starts.

MLB Corey Seager (back) out of lineup again Monday

A. Houser - SP
MIL1
Adrian Houser surrendered four runs in five innings against the Twins to take his first loss of the season Monday.
All of the runs scored on Eddie Rosario's slam in the third. Houser had allowed one run in 12 innings coming into this one, so while the Brewers don't have a lot of certainty in their rotation, there wouldn't seem to be any chance of Houser losing his spot right off.
Added 12:09 am (EST)
Added 12:09 am (EST)

F. Peralta - RP
MIL
Freddy Peralta fanned eight in four scoreless innings of relief Monday against the Twins.
It's the second time in three days the Brewers have gotten eight strikeouts from a single reliever (Corbin Burnes did it in 5 1/3 innings Saturday). Peralta started in his season debut July 26, but both of his appearances since have come in long relief. The Brewers could opt to keep him in that role, but with all of their interchangeable parts, it's hard to say what will happen.
Added 12:04 am (EST)
Added 12:04 am (EST)

A. Cabrera - 3B
WSH
Asdrubal Cabrera homered twice, doubled twice and drove in five runs Monday as the Nationals steamrolled the Mets 16-4.
Cabrera is the second player this year with four extra-base hits; Nelson Cruz also had two homers and two doubles on July 26. He's the first Nationals player to pull off the feat since Ryan Zimmerman on Sept. 29, 2017. It's the first time Cabrera has ever done it, and it was his 10th career two-homer game. Cabrera played first base tonight, making some room for Carter Kieboom in this one, but Cabrera will continue to play third base most nights. He's batting .357 with three homers in 42 at-bats.
Added Yesterday 11:52 pm (EST)
Added Yesterday 11:52 pm (EST)

S. Matz - SP
NYM
Steven Matz was torched for eight runs in 4 1/3 innings by the Nationals on Monday.
Matz's velocity is up a tick this year, and he has an 18/3 K/BB ratio in 18 2/3 innings. The problem is, of course, the home run ball. He gave up three more tonight, bringing his season total to eight allowed. He'd been too homer-prone in previous years, too, but nothing quite like this. He'll probably figure it out and going back to being his usual average-ish self.
Added Yesterday 11:47 pm (EST)
Added Yesterday 11:47 pm (EST)

T. Turner - SS
WSH1
Trea Turner had three hits, including a homer, and three RBI versus the Mets on Monday.
Turner is a stunning 0-for-3 in steals (he had a career success rate of 84% entering the season), but there still isn't much doubt that he'll prove awfully valuable in the end. The homer tonight was his second in 13 games this season.
Added Yesterday 11:43 pm (EST)
Added Yesterday 11:43 pm (EST)

M. Fulmer - SP
DET
Michael Fulmer pitched three scoreless innings Monday versus the White Sox.
Fulmer is coming back from Tommy John and hadn't pitched in two weeks because of the schedule interruption, so the Tigers were planning on going easy on him tonight. He threw 57 pitches in his three effective innings. The team will probably be aiming to have him throw four and five innings in his next two outings.
Added Yesterday 11:30 pm (EST)
Added Yesterday 11:30 pm (EST)