Justin Vreeland takes a look at the catcher position as it relates to fantasy baseball. Are they needed contributors or can you punt the position? 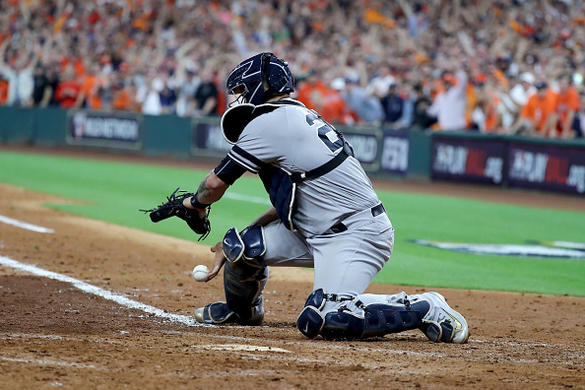 The catching position has long been a thorn in the side of fantasy players. Year in and year out it is the thinnest position in the fantasy world and has a very low number of players that will actually be beneficial to your roster. How do you go about drafting the position? What kind of value do the top catchers provide? What strategy goes into drafting the position? Do your own league settings play a factor into the value of catchers? Let’s dive in!

The difference between the number one-ranked catcher (Gary Sanchez) and the number 12-ranked catcher (Kurt Suzuki) in 2017 was massive. Sanchez hit 14 more home runs, drove in 40 more RBI, had 53 more hits, and scored 41 more runs. Not enough? He even stole two more bases. Okay, using Sanchez might be a little unfair, as he is far and away the top catcher going into 2018. Instead let’s compare the number seven-ranked catcher (Mike Zunino) to Suzuki. Zunino hit six more home runs, drove in 14 more runs, had 14 more hits, and scored 14 more runs. While the gap may not be as large, it’s still a pretty big difference. With the catcher position, unlike many of the other positions, the further you go down the list the gap widens at a much faster pace. With other positions there will normally be at least 12 players that you will feel comfortable drafting and starting on your roster. At catcher, on a normal basis, there may not be more than a handful of guys you want to own. Of course you have to own one and in many leagues two. This is where the value of drafting a top-tier catcher can pay dividends. Not having to worry about that position being a disaster all season is a great feeling. Top catchers can be difference makers and crush their competition at the position.

These variables can change the value of catchers drastically. In two catcher formats the value of top-tier catchers rises immensely. No one wants to get stuck with two catchers who will provide next-to-nothing for them in fantasy. Top-tier catchers play on a regular basis and will help you instead of hurting you. In two catcher formats it is wise to bump catchers up your ranks; but how much? This is where league size comes into play. Both in two catcher and one catcher leagues, league size is a factor into how important and valuable chasing an elite catcher is. The more league owners the more important grabbing a steady trustable catcher is. In a 12-team, two catcher league format, there are 24 catchers that are a part of the starting lineups. There are not 24 catchers who you want to start, there may not even be half that. Locking down a Gary Sanchez, Buster Posey, or Willson Contreras at least allows you to only have one dud at the position. If you pair one of them with a lower-end catcher you are still getting solid productivity from the position.

Playing time is another huge factor when drafting catchers. Unlike other positions where every day players will play just about every day, there are very few catchers who actually see the lion’s share of starts. Outside of the top guys, many of the ‘starting’ catchers will be in platoons or just see regular days off frequently. Last year, 183 players had 400+ at bats, only nine of those were catchers (Buster Posey, Gary Sanchez, J.T. Realmuto, Yadier Molina, Salvador Perez, Jonathan Lucroy, Yasmani Grandal, Matt Wieters, and Martin Maldonado). Of those nine players, six of them finished in the top-ten of fantasy catcher ranks at the end of the season (Buster Posey, Gary Sanchez, Salvador Perez, J.T. Realmuto, Yadier Molina, and Yasmani Grandal). Five of those six are pre-ranked in the top-ten heading into the 2018 season (Buster Posey, Gary Sanchez, Salvador Perez, J.T. Realmuto, and Yadier Molina). Playing time equates to fantasy success. The more a player plays the more chances he has to put up numbers. The top catchers will play more and will have a much greater impact on your team than the lower-tier catchers will.

Of course the top guys are worth targeting, but what about catchers with ADP’s outside the top 150? *Based on the Mock Draft Army results

Mike Zunino (176.14) - Zunino is coming off a career year in which he hit .251 with 25 home runs and drove in 64. While his average could see some regression to the .225-.235 range, the power is real. Getting 20-25 home runs from the catcher position this late in the draft is great. He finished third among catchers in home runs last season and could very well finish second this season only behind the great Gary Sanchez. He is still just 26 years old and was drafted third overall in the 2012 draft for a reason. The power will be there, with additional upside to help in other categories.

Welington Castillo (182.76) - Castillo was one of just three catchers to finish last season with 20 or more home runs and a batting average above .275 (Gary Sanchez and Willson Contreras being the others). He will be a regular starter for the White Sox this season and should be able to once again help fantasy owners in multiple categories. He has three straight seasons of 14+ home runs and 50+ RBI, making him a trustable backstop.

Austin Hedges (252.81) - Hedges is coming off his first season as a regular MLB starter and he flashed some good pop with the Padres last season, bashing 18 home runs at age 24. He hasn’t shown the ability to hit for average. His career average sits a shade under the Mendoza line at .199, but he did hit at a career high clip of .214 last season.  He appears to be a player with an improving game. He will be a cheap source of power and RBI as a C2 in two catcher formats.

Jorge Alfaro (270.62) - Alfaro is just 24 years old and he is coming off a solid season, albeit a small sample size. Last season he hit .318 with five home runs and 14 RBI across 107 at bats. His youth makes him a sneaky upside player. He was about a .260 hitter in his minor league career, so some batting average regression should be expected. He is worth drafting late in drafts as a C2 or bench player with upside.

Christian Vazquez (279.15) – Vasquez is coming off the best season of his career thus far; he hit .290 with five home runs and seven steals across 324 at bats. He is projected to be a regular starter for the Red Sox and hit near the bottom of the order. Being at the bottom of the order is never a good thing, but when it’s in a lineup as strong one-through-nine as the Red Sox is, it’s not such a bad thing. Vasquez is a good target in deep two catcher leagues, as he doesn’t hit for power, but he won’t kill you in any categories and the stolen bases are a plus. 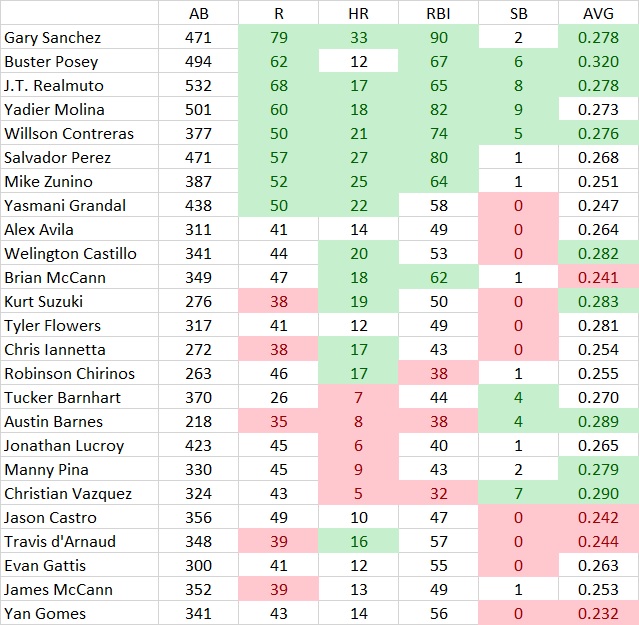 The above chart shows the top-25 ranked catchers from 2017 (in ranked order). Categories highlighted in green would be positive contributions, while categories highlighted in red would be negative. Categories that are not highlighted would be neutral (not helping or hurting your fantasy team). These highlights are in comparison to other catchers and not every position (example: five steals for a catcher is good; of course that is not good when compared to other positions). The below figures are a quick snippet of who provided the best numbers in some of the main areas last season.

The more positive attributes that a player brings to the table the better. Doing your homework on what each player can do will always be beneficial. Draft night you may miss out on some of the top guys and need options later in the draft, you can then make your decision on who to target based on your current team. Feel good about your projected homeruns? Maybe targeting a guy late like Christian Vazquez, who can provide average and some steals, is your best route. The flow of your draft and who you have drafted so far should always come into play on whom you should target next.

J. Mateo - SS
SD
Jorge Mateo has tested positive for COVID-19.
Padres manager Jayce Tingler said that Mateo had lost some of his sense of taste and smell, although it has started to come back. Obviously, it's questionable now as to whether Mateo -- who was acquired from the A's last week -- will be ready for Opening Day.
Added 4:02 pm (EST)
Added 4:02 pm (EST)

Y. Méndez - SP
TEX
Rangers reinstated LHP Yohander Mendez from the restricted list.
Mendez was suspended by the team back in March for seeking unauthorized medical attention. He will be added to the 60-man roster pool.
Added 4:00 pm (EST)
Added 4:00 pm (EST)

J. Teheran - SP
LAA
Julio Teheran told Enrique Rojas of ESPN Deportes that he's awaiting the results of a COVID-19 test but is hoping to join the Angels by this weekend.
Teheran revealed that he and some members of his family have shown COVID-19 symptoms, which is why he's remained in Atlanta and away from the club. If the results of his test come back negative, it sounds like he will be cleared to join the Angels soon. Teheran could conceivably still have enough time to get ready for the start of the season.
Added 3:36 pm (EST)
Added 3:36 pm (EST)

J. Iglesias - SS
BAL
Jose Iglesias won't play in the Orioles' intrasquad game Wednesday because of a sore back.
The hope is that Iglesias will be able to get in some at-bats on Thursday, so the ailment doesn't seem to be a big deal. Consider him day-to-day.
Added 3:25 pm (EST)
Added 3:25 pm (EST)