Jon Impemba takes a fantasy spin at the card collectors game, providing fantasy analysis for the upcoming fantasy baseball season for the players he draws from his pack of baseball cards. 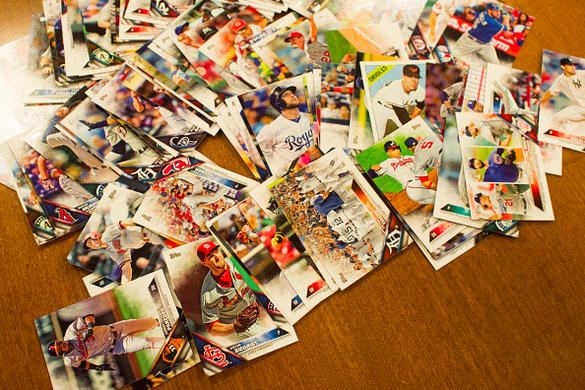 Sitting inside, itching for sports to start has gotten me into thinking about some old hobbies. One of those hobbies, like probably many of my generation who love sports, was collecting baseball cards. I would ask for box-set and card packs for gifts during birthdays and holidays. When I got a good report card, my reward was going to the store and getting to buy a few packs. On rare occasions, I would even get to go to this place called Batter-Up, which sold the individual sports cards such as holographic or jersey cards along with other memorabilia. I had binders filled with cards, but those are now somewhere in a storage unit or basement and, while practicing our social-distancing, I decided to start a new collection.

Now, the value in baseball cards today is certainly far less than it was 20 years ago, but it does not take away from the sense of excitement when it comes to not knowing what cards are beneath the plastic. At this point you may be wondering what exactly the point of this article is, so let’s get to it. Each week I am going to be opening a pack of baseball cards and writing about the cards in that pack. Hopefully those of you reading this are collectors yourself or enjoy the nostalgia of baseball cards. So, here we go, with “What’s in the Pack!”.

The Set – Topps 2020 Baseball Series One

I wasn’t too picky with the box set that I purchased to be completely honest. All I knew that I wanted was for the box to be a 2020 set and for it to have card packs to be opened. Each box set was to include autograph and relic cards. 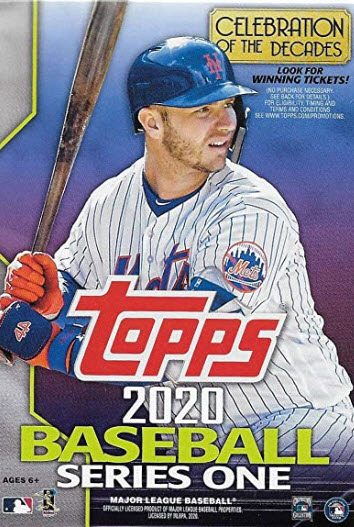 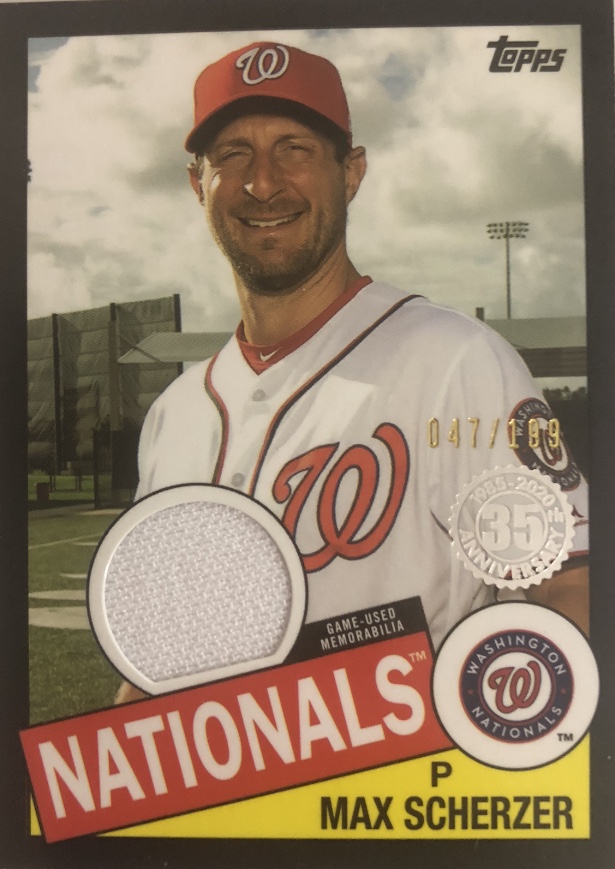 Well this was quite the first pull I will tell you that. Now, yes, each box set does include a Relic and Autograph card so I knew one would be here but to get it right away was a surprise. What we have here is the Max Scherzer Game-Used Memorabilia card for their 1985 Topps Baseball Relic series. In terms of value, we can likely only go down from here. I’ll have to go check out the actual card value but a quick scan on eBay has this card ranging anywhere from $6-to-$9 which would cover more than the cost of a few of the packs in this box set.

Scherzer is coming off a “down” year in which he appeared in just 27 games which was the fewest since his rookie year and his 172.1 innings were his fewest since 2009. That said, he still finished with a 2.92 ERA with a league best 12.7 K/9 while finishing third in the Cy Young voting. In terms of ADP he is still being taken among the top 15 players and is ranked as SP3 behind Gerrit Cole and Jacob deGrom . 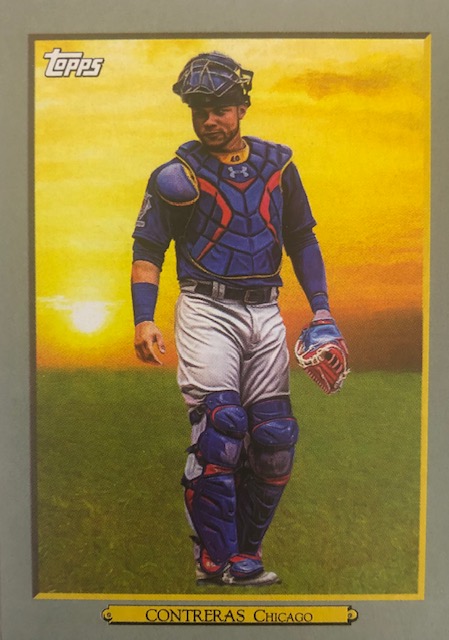 This pack is strong to start with another specialty card pull with Willson Contreras with what Topps is calling their “Turkey Red” series. 2019 was a frustrating one for fantasy owners as injury hindered a breakout season. Over 105 games Contreras hit .272 with 57 runs, 24 home runs, 64 RBI and an OPS of .888. The 24 home runs and the .888 OPS were both career highs as were the 57 runs scored. In terms of ADP, Contreras was the fourth catcher coming off the board in drafts with an average pick of 109.0. He should continue to hit towards the middle-half of the Cubs lineup which is loaded at the top and should provide some nice RBI chances for him. 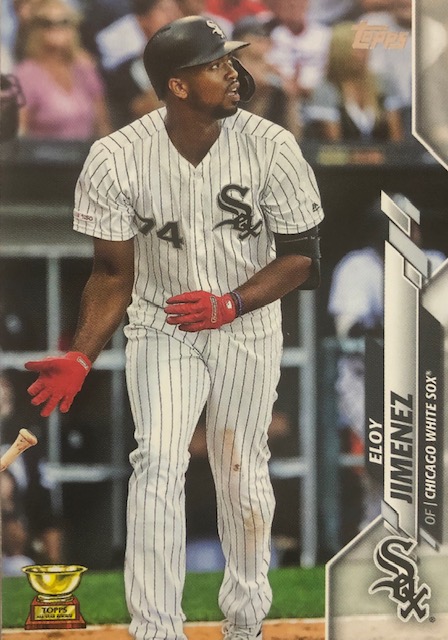 Here we have the standard Topps All-Star Rookie Card for White Sox outfielder Eloy Jiménez . It was a strong rookie season for Jimenez who entered the year as the No.3 overall prospect in baseball and in my opinion, he lived up to the hype. Over 122 games he hit .267 with 69 runs, 31 home runs, 79 RBI and an OPS of .828. The fact that he showed off his elite power upside off the bat is a great sign for him heading into 2020. We would certainly like to see the strikeout numbers come down a bit, but he is one of my favorite outfielders to target in drafts this season. Jimenez is currently ranked as OF18 with an average ADP of 60.2. The lineup improvements made by the White Sox this offseason by adding Yasmani Grandal and Edwin Encarnación should only boost the overall upside and give Jimenez some nice opportunities to drive in runs. 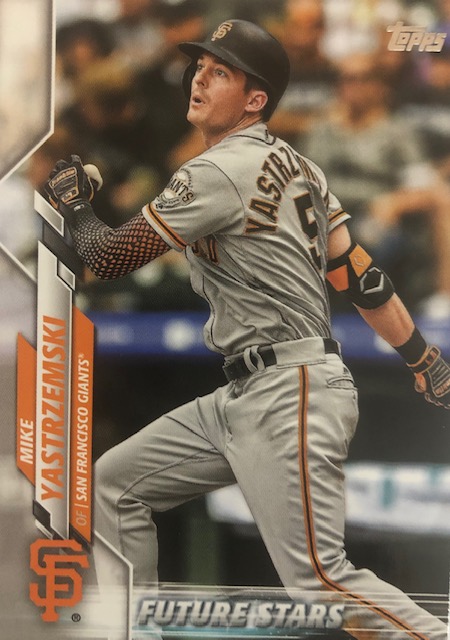 Not quite sure about this one here. Topps calling Yastrzemski a “Future Star” is questionable at best. Sure, he has the blood line being the grandson of hall of famer Carl Yaztrzemski but Mike made his major league debut at 28-years old and will be 30-years old by the time this season ends. Age aside, it was not an awful rookie year here for the younger “Yaz” as he hit .272 with 21 home runs over 107 games. Outside of NL Only leagues there is little value here unless the power really pops. Yastrzemski has an ADP of 276.2 and is being taken as OF73. 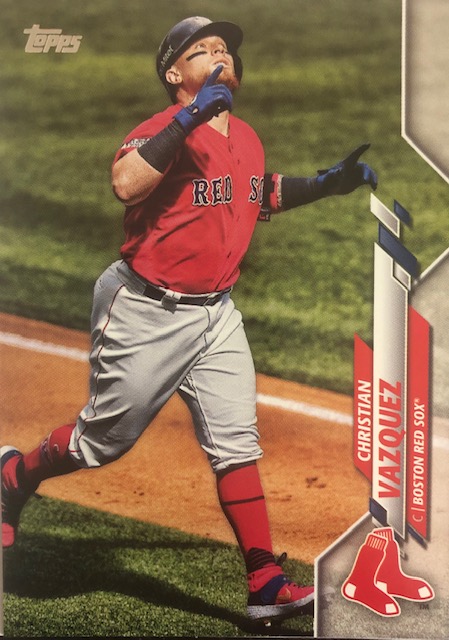 It was a breakout season for many in 2019 but one who really surprised was Red Sox catcher Christian Vázquez who entered the season in a time share but quickly hit his way into the near everyday role. Playing a career high 138 games, he hit .276 with 66 runs, 23 home runs and 72 RBI. The home run total was helped by a 16.0-percent HR/FB ratio which was more than double any other season he has had however, the home run ball was jumping off everyone’s bat in 2019 and unless there are some changes made we could certainly see Vazquez put up solid power numbers from the catch position once again in 2020. Right now, he is ranked as C9 and has an average ADP of 198.4. 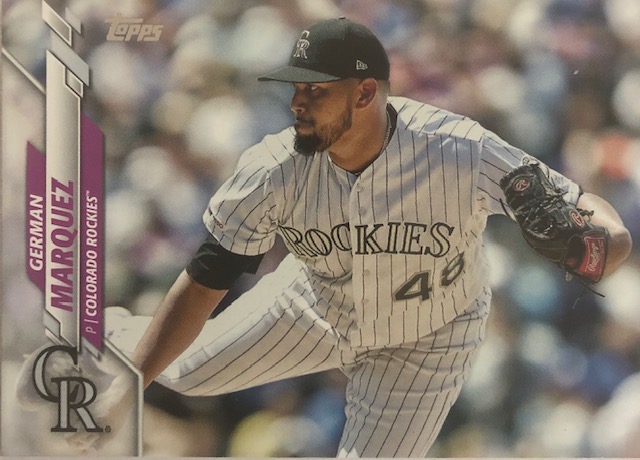 Few players entered 2019 with more debate among the fantasy community than German Márquez who ended 2018 on an elite run but his home/road splits were on complete opposite ends of the spectrum. Marquez just cannot pitch in Coors Field but flashes elite “Ace” level production when on the road. So, the question was when to draft Marquez if you should be drafting him at all knowing that he is only useful for half his starts in a season. Unfortunately, those who drafted Marquez suffered through a down year as his ERA ballooned to 4.76 and his K/9 dropped to 9.05. The home/road splits were again night and day with Marquez getting shelled at home, posting a 6.26 ERA over 73.1 innings while owning a 3.67 ERA over 100.2 innings on the road. For his career, Marquez owns a 5.01 ERA in Coors and a 3.72 ERA on the road. For me he is a fade in all drafts unless he finds himself on a new team. Right now he has an average ADP of 179.0 while being ranked as SP51. 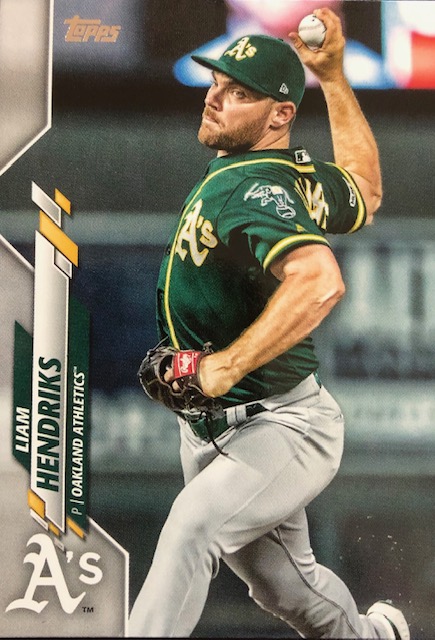 Hendriks did not pick up his first save until June 22 but he flat out dominant from that point on as he took over the closer role in Oakland. Over the remaining games of the season Hendriks posted a 2.11 ERA while striking out 74 over 42.2 innings. He finished with 25 saves on the year and will enter 2020 as the A’s closer. For Hendriks, his 2019 season provided yet another example as to why you do not need to pay for saves as guys will be available on the waiver wire that can get the job done. Right now Hendriks has an average ADP of 100.6 while being ranked as RP7.