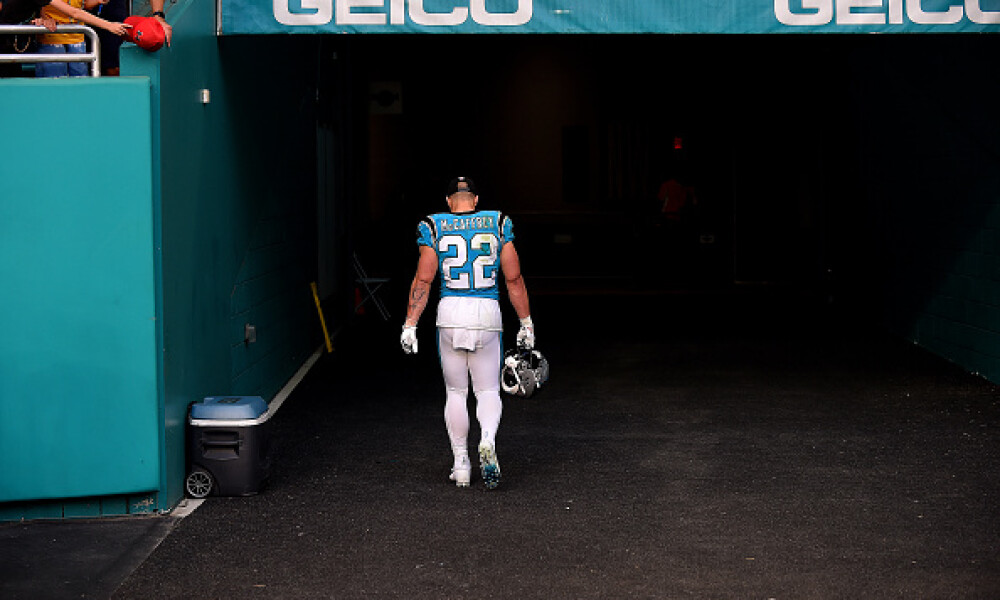 Kyler Murray, ARI - Cardinals coach Kliff Kingsbury told the media he was hopeful that Kyler Murray would be able to return from his ankle injury in Week 13 following the team’s bye. Murray has missed the last two weeks since suffering the ankle injury back in Week 9. Arizona faces the Chicago Bears this week in Chicago.

Christian McCaffrey, CAR - CMC was placed on season ending IR on Monday following the ankle injury he suffered during the team’s Week 12 matchup against the Dolphins. McCaffrey was seen in a walking boot after the game and a subsequent MRI revealed a more serious injury that was going to prevent the Panthers running back from returning this season.

Dalvin Cook, MIN - Cook suffered a dislocated shoulder and torn labrum during the Vikings loss to the 49ers this past week. The team said Cook will miss at least the next two weeks but there is no firm timetable on the actual time frame in which fantasy managers can expect him to return.

D’Andre Swift, DET - Swift suffered a strained shoulder and Head Coach Dan Cambpell was quoted as saying it was unlikely that Swift would be playing in Week 13.

J.D. McKissic, WAS -McKissic was carted off the field at the end of Washington’s Week 12 game against the Seahawks with a head injury but all post game reports stated that he was feeling good and should be ready to play moving forward.

Alvin Kamara, NO - Kamara was limited in practice on Monday with the knee injury that has sidelined him for the last two weeks. The Saints will again play on Thursday after just having played on Thanksgiving as well against a Cowboys team coming off a tough loss to the Raiders on turkey day as well.

Mark Ingram, NO - Ingram was a full participant in practice on Monday and his availability may go a long way when it comes to the status of Alvin Kamara. With it looking like Ingram will be active this week against Dallas the Saints may not see a need to rush Kamara back before he is 100%.

Ezekiel Elliott, DAL - Elliott was a full participant in practice one day after the report came out that Dallas may look to rest their starting running back as he recovers from a knee injury. With Dallas playing on Thursday against the leagues top run defense it may have made sense to let the star running back take a breather but the full practice suggests he may be suiting up.

Darrell Henderson, LAR - Henderson is dealing with a quad strain that was suffered during the Rams Week 12 loss to the Packers. Henderson was a limited participant in practice on Monday and Head Coach Sean McVay said the injury will be monitored throughout the week.

Deebo Samuel, SF - Samuel suffered a groin strain during the 49ers Week 12 win that is expected to keep him out of the lineup for the next 1-to-2 weeks per reports. Samuel himself said the injury wasn’t something that had him overly concerned but that he is going to be cautious so it doesn’t become much worse.

DeAndre Hopkins, ARI - Much like his quarterback Kyler Murray, reports are that the team is hopeful that Hopkins will be able to return from his hamstring injury that has cost him the last two weeks in their upcoming matchup against the Bears. The Cardinals are coming off a bye so we will have to monitor the practice reports this week.

CeeDee Lamb, DAL - Lamb was in the leagues concussion protocol and missed the team’s Thanksgiving Day game against the Raiders. He did however practice in full on Monday and is expected to play this upcoming Thursday in the Cowboys Week 13 game against the Saints.

Amari Cooper, DAL - No positive news for those who have rostered Cooper as the Dallas receiver has still not been cleared to return after testing positive for Covid-19. He did not practice on Monday and he seems unlikely to play this week.

Cedric Wilson, DAL - Wilson suffered an ankle injury that had him sidelined for Monday’s practice. With Dallas playing on Thursday this is certainly something to monitor as the team is already shorthanded at the receiver position even if CeeDee Lamb is expected to return.

Randall Cobb, GB - Cobb was forced from Sunday’s game after suffering a groin injury. The severity of the injury has not yet been disclosed so for now fantasy managers should consider him day-to-day until we get updated practice reports.

Darren Waller, LV - Waller suffered an injury to his IT Band during the Raiders win over the Cowboys in Week 12. The injury is expected to sideline him for 1-to-3 weeks according to reports.

Dan Arnold, JAX - Arnold suffered a knee injury during the Jaguars Week 12 game that is going to cost him the next 4-to-6 weeks. Fantasy managers can likely drop the Jacksonville tight end and if in dire need look for his replacement in James O’Shaugnessy who was the starting tight end before suffering an injury of his own which ultimately lead to the trade for Dan Arnold from the Panthers.

Pat Freiermuth, PIT - Freiermuth was being evaluated for a concussion following the Steelers loss to the Bengals in Week 12. There has not been an updated report as to whether or not he has entered the leagues concussion protocol but that is certainly something to monitor in the coming days.