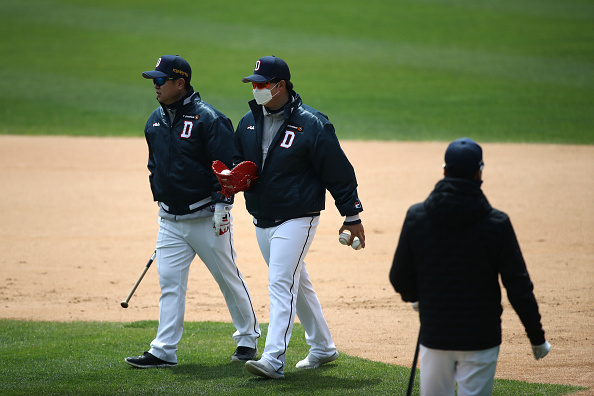 Happy Saturday, guys! Tonight -- or tomorrow's -- slate locks at 4:00 AM EST. Different from the 5:30 AM lock we've had the previous three nights. Enjoy the write-up and if you have any questions, join the KBO subscriber chat or holler at me on Twitter --> @The_Real_Grande

Over on DraftKings there is literally one pitcher above the 7K price tag and that’s Lee. He’s going to be extremely chalky because of it, but he pitches for the best team in the league and is a -184 favorite for Saturday’s contest. Lee has put together two straight decent seasons and has eclipsed 100 strikeouts in each of them. Spending up here is a nice safety net.

Greg Jewett, Howard Bender and Tae Hoon Kim all have something in common. None of them started a single game in 2019. At least I think. Kim did, however, come out of the bullpen 71 times. He’s made 132 appearances in the past two seasons and only four have been starts. Who knows what to expect, but SK are favorites here on the road against the 4-0 Lotte Giants.

Han did not start a single game in 2019 and came out of the bullpen all 61 appearances he made, but in 2018 he started 28 games, so he has a background in being a starting pitcher. Outside of Lee from Doosan, Han is the biggest favorite in Vegas at -178. He has twice won 11 games as a starter and in both of those campaigns, he surpassed 100 strikeouts, so there is some upside here if his arm is stretched out. Either way, pitching is so weak on this slate we’re going to have to take shots somewhere. This could backfire and he may only pitch one inning. It’s up in the air at this point.

Look, pitching is awful. There is going to be SO much offense on this slate. The most we’ve seen on a given night this season. We’re taking a stab with Im in this spot. He ended his 2019 campaign throwing six innings in each of his final starts registering a QS in all three. He’s not a big strikeout artist but he did notch a six-K game during that span, which is more than good enough at minimum salary.

It hasn’t been the fastest start for Choi, but boy is he elite. He gets the split here squaring off with a southpaw and is coming off a 2019 campaign in which he led his team with a .918 OPS and 147 wRC+. Choi has belted 29+ HR for four straight campaigns. Look for number two of the ‘20 campaign to come on Saturday.

Since picking up an everyday role back in 2016, Kim has become one of the league’s premier power hitters, belting 15+ in four straight seasons including 35+ in three of them. He is off to a fast start this season notching a .643 SLG and 1.055 OPS. It’s only four games, but how can we ignore the .364 ISO considering his prolific power?

Tucker’s season has been held together by one big game, but don’t be surprised if that doubles here in this match-up. He played only 95 games in the KBO last season, but posted an elite .311/.381/.479 slash and has a career .833 OPS in the minors as well. Tucker faces off against a RHP who enters his second KBO season coming off a 4.82 ERA and 1.41 WHIP in his first campaign.

Although Lee only hit six home runs last season, he carried an .841 OPS and 136 wRC+. He reaches base a LOT posting a .388 OBP or better in his first three seasons and also swipes a ton of bags, notching double-figures in each campaign. He hits third for Kiwoom and is in a prime run producing spot on a nightly basis.

Ex-Detroit Tiger great is becoming current KBO great, that’s for sure. Machado is slashing .400/.471/.800 with two home runs, six runs batted in and a stolen base through four games. He gets a righty-lefty match-up here and the split favors the batter. Look for him to continue his hot hitting.

Hoying has gotten off to a rocky start, but this is the type of game environment to break out of his short slump. Hoying hit 48 HR during his first two seasons in the KBO while posting an OPS greater than .800 in each season. He faces off against a right-handed pitcher in this spot and could potentially see a multitude of pitchers out of the Kiwoom bullpen and we all know how weak KBO bullpens are.

Lee got off to a strong start this season and then went yard for the first time on Friday. Lee draws a lefty here, which obviously plays into the split. We’re talking about a guy who, across 20 seasons of professional baseball from Japan, to the MLB to the KBO, has 412 career bombs. He’s a nuclear missile waiting to launch at any given moment.

*Inserting Han into all of my lineups...once again* He’s a nightly play right now the way he’s swinging the bat. He’s poured in 16+ DK points for three straight nights including two home runs and six runs batted in over that span. This is your prototypical “right the hot hand” play.

The only bummer when talking about No right now is where he’s hitting in the Dino’s order; seventh. The positive is they’re actually hurting with three potential starting position players hurt. If they all miss time, we could see No slide up in the lineup. I’m still rostering him at this price even if he hits seventh, however.

After not starting the first two games of the year, Jeong was SK’s leadoff man the previous two games reaching base six times, scoring two runs, driving in three more and stealing a bag. SK is one of my favorite stacks and this only fuels the fire even more.

For a player that’s only 2.4K, Choi has been an awfully effective fantasy producer. He has 4+ DK points in three straight games and has been batting in the heart of the lineup in the five hole. He’s an OBP machine notching a .344 mark or better every season since 2015.

This section, named after my three-month old son, will be out go-to stacks! Enjoy!

1) Doosan Bears → If at first you don’t succeed, dust yourself off and try again, try again. At least that’s what the great Aaliyah once taught us. In this case, we’re trying again with Doosan who I labeled my top stack on Friday and they flopped, scoring just three runs and losing by nine. They will redeem themselves on Saturday, squaring off with Min Kim who went 6-12 last season, allowing 16 home runs in 150.2 IP while notching an atrocious 91:65 K:BB ratio. HIs 4.96 ERA and 4.90 FIP didn’t do him any favors either.

2) SK Wyverns → They were not a great team by any stretch last year, but their offense has been pretty good excluding the goose egg they put up in Game 1. Won Sam Jang, the opponent for SK, hasn’t seen much success on the mound since 2015. Sure he’s only pitched 16 games the past two seasons, but that doesn’t bode well for a 26-year old that has pitched since 2006.

3) Lotte Giants → They’re 4-0 and probably not getting the respect they deserve. The offense has been potent thus far with Dixon Machado and Dae Ho Lee, both former MLB players, leading the charge. SK is starting Tae Hoon Kim who is intriguing, sure, but did not start a single game in 71 appearances in 2019. If he’s extended, how will he fair? With Lotte’s offense as white hot as it is, they might not want to find out.