James Grande brings you the top value plays to build your lineup around for tonight’s main slate! 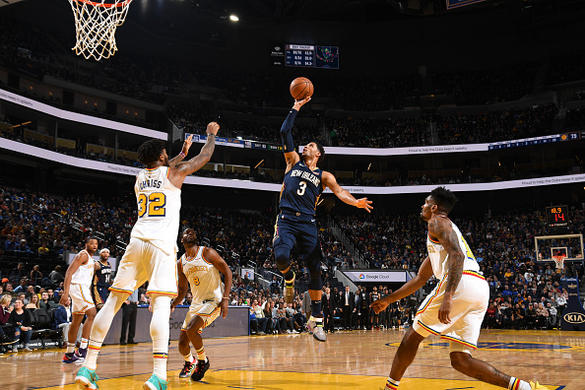 I understand he didn’t perform how we had hoped he would his last time out, but he’s still under 5K and now draws a match-up against the Wizards. Washington ranks 29th in DvP and only the Hawks are worse. The reason we’re going to Smart again is because Kemba Walker has once again been ruled out. Smart sees an increased usage of over three percent -- second highest on the team -- and averages exactly one FP/min with Walker off of the floor this season. It’s a massive pace up spot to boot and we saw a 40-plus FP ceiling out of Smart without Walker. Lock and load at this price and in this match-up.

Jrue Holiday has been ruled out of this game and that will lead to extended run for Hart. Hart is already a main staple in the rotation notching 24-plus minutes in nine-of-10 games. He has averaged .92 FP/min without Holiday on the floor this year, which could be an elite fantasy output if he sees 30-plus...

K. Walker - PG
BOS
Coach Brad Stevens said the Celtics are "going to move very slowly with Kemba [Walker]."
"[We will want to] make sure he can strengthen [his knee] and make sure he’s all good to go as we enter the seeding games and into the playoffs," Stevens said. This isn't a surprise here after Walker had mentioned he had wear-and-tear effects on his knee, which caused him to miss some time just before the NBA hiatus. His minutes will likely be managed to in the seeding games.
Added Yesterday 9:47 pm (EST)
Added Yesterday 9:47 pm (EST)

A. Roberson - SG
OKC
Andre Roberson (left knee) went through practice on Friday, according to coach Billy Donovan.
"He participated in everything," Donovan said. Last month, it was reported that Roberson would've been able to play in early June, but that doesn't necessarily mean he'll be playing. Lu Dort has been a pleasant surprise and the Chris Paul, Shai Gilgeous-Alexander, Dennis Schroder, Danilo Gallinari and Steven Adams lineup is the best lineup in the NBA this season (min of 100 minutes).
Added Yesterday 7:18 pm (EST)
Added Yesterday 7:18 pm (EST)

K. Leonard - SF
LAC
Kawhi Leonard is on his way to Orlando and will arrive Friday evening, according to coach Doc Rivers.
He did not travel with the team on Wednesday, but there was never any concern on his eventual arrival. The Clippers are sitting in the No. 2 seed heading into the restart with a 1.5-game lead over the Nuggets, and they may want to hold it to take on the Mavs instead of a team like the Rockets, Thunder or Jazz. Still, Kawhi is likely to get at least one game of rest in the seeding games.
Added Yesterday 6:19 pm (EST)
Added Yesterday 6:19 pm (EST)

P. George - SF
LAC
Paul George said he‘s had some insecurities with his shoulders earlier this season, but he's felt much better over the last few weeks.
“I’m feeling back to myself again,” George said. He added a #BestShapeOfHisLife note in his Zoom presser on Friday. George also had some hammy problems in the 2020 portion of the season, so the time off may have helped him there, too. The Clippers are one of the deepest teams in the NBA, so they may keep PG's minutes down during the reseeding games.
Added Yesterday 6:12 pm (EST)
Added Yesterday 6:12 pm (EST)

K. Nunn - SG
MIA
Goran Dragic said Kendrick Nunn is not with the Heat on Friday.
Dragic said that he hopes Nunn can make it to Orlando soon, and the team is optimistic that they will have a full squad for the games. Two unknown Heat players have tested positive for COVID-19, and the team may update Nunn's status in the coming days.
Added Yesterday 4:31 pm (EST)
Added Yesterday 4:31 pm (EST)

B. Adebayo - PF
MIA
Goran Dragic said that Bam Adebayo and Kendrick Nunn are not with the Heat on Friday.
"Hopefully Bam can come and K. Nunn and we can be a whole team and make some damage,” Dragic said. Besides Derrick Jones Jr., two other Heat rotation players have tested positive for COVID-19, so it's possible the two players are Bam and Nunn. The team is optimistic that they will have a full team before the games start. There could be an update on Bam and Nunn in the coming days.
Added Yesterday 4:24 pm (EST)
Added Yesterday 4:24 pm (EST)