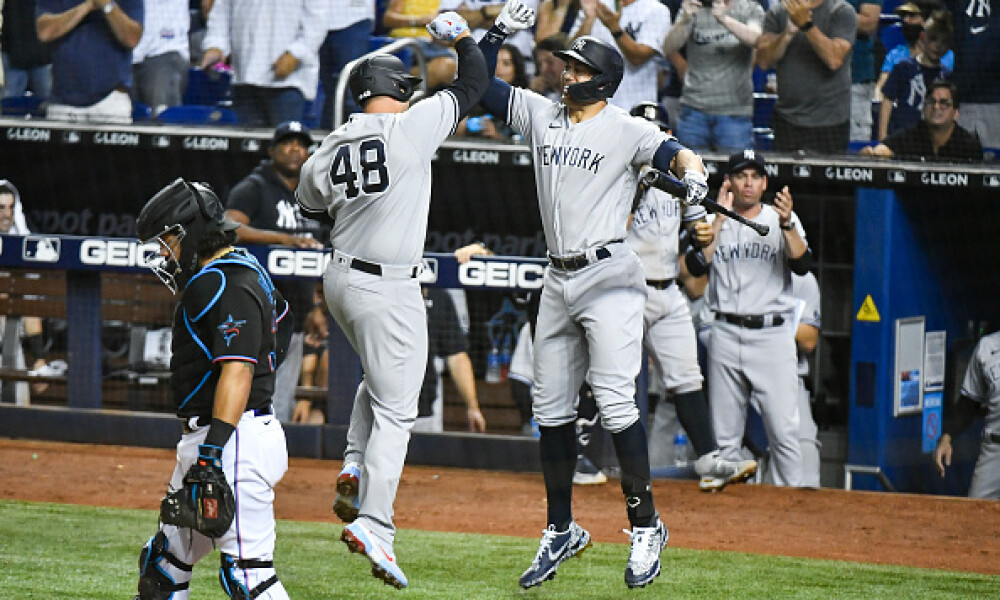 What a Trade Deadline it was

Our very own Jim Bowden said it best…

All 30 teams made at least one trade. Even if the Rockies front office is incompetent and got absolutely nothing for their pieces, at least they made one deal!

It’s the season of Joey Votto, apparently. He’s homered in seven straight games, one off the major league record. He’s hit NINE bombs over this seven game stretch and to tie the record on Saturday, he’ll face Rich Hill. He’s 1-for-10 in his career off of Hill and this year he’s hitting just .207 against left-handed pitching. Can he do it? Will he do it? At this point, I’m not putting it past him.

We’ve seen him in royal blue pinstripes for years but he swapped them for navy blue, the colors of the Yankees pinstripes, and boy does it look natural. In his first game with his new team, Rizzo broke a 0-0 tie and deposited a moon bomb 449-ft bomb into the upper deck. He went 2-for-3 with that home run, two runs scored and a walk. Rizzo’s riding hot right now, notching a hit in seven straight games and has homers in four of five overall.

Maybe one of the most underrated moves of the deadline was the Brewers acquiring Eddie Escobar from the Diamondbacks. The Brewers are a really good team, but have some holes in their infield. Just this year alone they’ve acquired Rowdy Tellez, Willy Adames and the aforementioned Escobar, Escobar being the most polished bat of the group. He belted a home run on Friday giving him 23 this year. The quietest 23 bombs in the league, I’d say. This is a guy who hit 35 HR and drove in 118 RBI in 2019. The Brewers have pushed all the right buttons this year.

What to do with the Braves Outfielders?

The Braves acquired three outfielders at the deadline just a week after getting Joc Pederson too. They now have Jorge Soler, Adam Duvall, Eddie Rosario and Pederson for three spots. For the next couple of weeks, it’s not a concern because Rosario is injured, but once he comes back, someone is getting pushed to the bench. My suspicion is they’re going to simply ride the hot hands the best they can. I truly don’t love their value for fantasy moving forward. I’d give Pederson the edge over all of them as long as he continues hitting atop the Braves lineup.

This guy is a dog. So underrated. Chris Bassitt fired seven shutout innings while striking out seven on Friday, lowering his ERA to 3.28 and giving him 11 wins on the year. The 32-year old All-Star has a career best 24.8% K-rate and career low .220 BAA. If Oakland makes it to the postseason, they’re in very good shape with Bassitt and Frankie Montas heading their rotation.

Jose Altuve belted two more home runs on Friday night, giving him 25 on the year. Altuve has seemingly sold out for power as his average sits at .281, which is very good, just not be his standards. His career high for homers is 31 so it feels like a safe bet that he’ll be setting a new career high in 2021.

We have ALL 30 teams playing baseball on Saturday, weather permitting, with the first pitch of the day scheduled for 3:07 pm EST and the last at 8:40 PM. Alek Manaoh and the Blue Jays are the slates biggest favorites at -240 and that game is the ONLY game that’s a -200 spread or larger.

We have a few aces in Yu Darvish, Brandon Woodruff and Aaron Nola on the hill today and we have three offenses with implied run totals over five in Toronto, St. Louis and Kansas City. Buckle up for a wild Saturday of baseball!

This article, starting tomorrow, will become a football centric piece. We will begin breaking down what’s going on around training camps all over the National Football League each and every morning, leading into the year. It’s been an honor serving up the what’s what in baseball each and every morning! Catch y’all on the gridiron next Saturday!