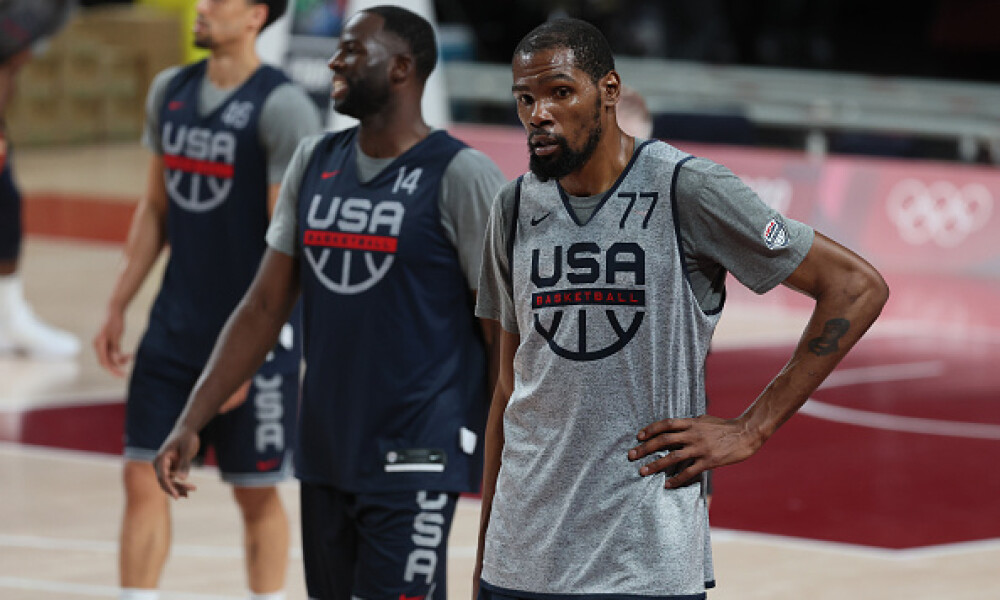 To kick off the Olympics, we have a four-game slate on the mens side of things. We’re bringing this to you ALL free, so let’s get going!

It’s been said that Iran is the weakest team in the Olympics this year and this spread and line suggests just that. This *should* be a walk in the park for the Czech squad, but we all know how that goes.

They’re led by Tomas Satoransky as the lone NBA representation they have. He also happens to have led them in scoring and assists during the qualifiers to get here. He’s one of the top mid-tier plays of the slate.

A name some basketball fans may remember is Jan Vesely. He plays for the Czech squad and has been very effective during the qualifier, averaging nearly 27 minutes, 10.8 points, eight rebounds, 3.5 assists and 2.3 steals. He’s a key contributor here.

Ondrej Balvin has averaged a double-double for CR in four games and is MIN salary. This is an easy way to help get some members of the US team in there. He’s the team's starting center.

Patrik Auda rounds out my interest. He’s been coming off the bench for the Czech squad, but he’s averaging 14 PPG, which is the second highest average on the team.

It’s going to be a tough sell using any of the Iranian players, but let’s break down their top players overall. First, their leading scorer in these Olympic games has been Behnam Yakhchali, but at just 12 PPG.

After Yakhchali, it’s bleak. Arsan Kazemi is a solid rebounder, averaging 10.5 boards a game, but he doesn’t score a lot. Mohammed Jamshidi could be worth taking a stab at. During the FIBA Asia cup qualifiers, he averaged 15.8 points, five rebounds and 3.8 assists per game.

That’s really all the exposure I’m looking to get from Iran, if any.

Italy is a deep team with NBA representation to boot. Because of that, they’re the slight favorites in this spot.

It starts with Danilo Gallinari, who’s going to be featured early and often against the German squad. We don’t need to go into much here, knowing how Gallo plays from watching the NBA nightly, but he is a score first guy who can rebound as well.

An interesting addition to the Italy roster is Warriors guard Nico Mannion, who lit it up in his first three games with the team, averaging 17.7 PPG. He also chipped in with over four assists per game, but the 45% from three is hard to ignore.

Stefano Tonut is the reigning LBL -- Italy pro basketball league -- MVP and through three games at the Olympics, he’s averaged 12.7 PPG and has hit 46.3% of his three-point attempts. Simone Fontecchio has actually been the team's leading scorer this Olympics at 19.7 PPG.

Last but not least, Achille Polonara is a sneaky double-double threat as he averaged 12 points & seven rebounds per game in the Euro League in 2020-’21.

It’s weird to see Germany’s minutes distribution through their Olympic run thus far because neither Moritz Wagner or Isaac Bonga have averaged more than 20 MPG. Despite that, Wagner has been the team's top scorer and is the top target here.

Johannes Voigtmann could have an impact too. He averaged 11 PPG during the FIBA games back in 2019 and is a two-time All-Star in the BBL. He’s averaged 27 MPG during the Olympics thus far, which tops the team.

Maodo Lo has averaged 12.8 PPG and 26.5 MPG thus far, both ranking second on the team. Joshiko Saibou will get a chance to start at PG with Dennis Schroder sitting out this Olympics while chasing his bag. He’s a decent scorer, distributor and has averaged nearly four rebounds per game this Olympics.

This game has the second highest O/U on the slate behind USA/France and could be the most intriguing from a DFS standpoint outside of that game.

There is a LOT of NBA talent on the Nigeria roster. When they played the USA and upset them in an exhibition a couple of weeks ago, Gabe Vincent scored 21 points. We know Vincent can score. We saw it in the G-League and we saw it when he got his opportunity with the Heat as well. He stands out the most. Nigeria has a DEEP roster.

Precious Achiuwa, Vincent’s Miami Heat teammate, should see plenty of run here and is really intriguing if you think Nigeria has a chance to pull an upset here. He’s a double-double threat.

Other interesting Nigerian players include Ike Nwamu, Chimezie Metu, Josh Okogie & Ekpe Udoh. Three of those players are and have been in the NBA.

Oh, how could I forget BIG JAH! Jahlil Okafor scored 15 and led the team in scoring against Argentina. Okafor is a great value as we know, the dude can score.

Australia is loaded and are rightfully the favorites in this match-up, but so was USA in their exhibition against Nigeria. They have six NBA players on their roster and after a fourth place finish in the 2016 Olympics, they want more.

Patty Mills, Joe Ingles and Aron Baynes stand out right off the bat. We should see all three in the starting lineup. Mills averaged 21 PPG in the ‘16 Olympics and 22 PPG in the ‘19 FIBA games. He’s their leading scorer and we can roster him comfortably.

It remains to be seen how much Australia will deploy Aron Baynes because in the ‘16 Olympics and ‘19 FIBA games, he barely played over 20 minutes a night. I do like his price, however, so you could take a shot on him in tournaments.

Matisse Thybulle, of the 76ers, is part of this squad and he’s going to see plenty of run and cause a LOT of issues defensively. Thybulle is a force on that end and is also a pretty good shooter himself. Someone else interesting is Josh Green of the Dallas Mavericks. The 20-year old scored nearly 14 PPG in the G-League this past season, so someone worth taking a shot on for sure. He’s 3.4K.

I’ll give ya one more name...Chris Goulding. He’s averaged 14.1 PPG throughout his career in international basketball. He doesn’t shoot an efficient percentage from the floor, but he shoots..a lot. High risk, however, because he didn’t play many minutes, in 2016 or ‘19, for the national team.

This is the game that everyone wants to see. Let's face it. Team USA did NOT look great leading up to this event. They dropped games they shouldn’t have and everyone started asking questions because of it.

Look, team USA has made it clear over their last two exhibition games that they’re not going to be playing TOO many guys.

Kevin Durant, Damian Lillard, and Jayson Tatum all played big minutes against Argentina and Spain leading up to this game. Those are our primary targets here. Take your pick because they’re all superstars and all capable of taking a game over.

Outside of those three, we should expect to see a lot of Draymond Green, Zach LaVine, and Bam Adebayo really playing a bulk of the minutes. Those are the six guys we should focus on. Green started their last tune up game against Spain, Adebayo came off the bench just for context sake.

One more thing of note; Khris Middleton, Devin Booker & Jrue Holiday are ALL joining the team for tonight’s game, but how much will they play considering the finals just ended? We’re unsure. Even coach Gregg Popovich stated as much. MAYBE just maybe, if one sneaks into the starting lineup we can deploy them. That’s if they’re even playing.

It’s going to be tough sledding for the French team no longer with Tony Parker. They do have a big NBA presence led by Rudy Gobert, Evan Fournier, and Nicolas Batum. Expect Fournier to be the teams go-to scorer and Gobert -- like usual -- doing all the dirty work on the inside.

Batum will have to be more aggressive offensively here than he is in the NBA considering he doesn’t have Kawhi Leonard or Paul George by his side. I think Batum is sneaky good in this spot.

Guerschon Yabusele didn’t find success in the NBA, but found plenty everywhere else he’s played. He was a 20+ PPG scorer in China, he averaged 14 PPG in France & in the Euroleague this past season, putting up 11 points & four rebounds per night across 25 minutes.

Franky “Smokes” Ntiklina is an option, but he’s going to have his hands full guarding Damian Lillard all game. Timothe Luwawu-Caborret is also in play if starting. We know when he gets the ball in his hands he’ll shoot it from anywhere. The French need a spark and it could be him.