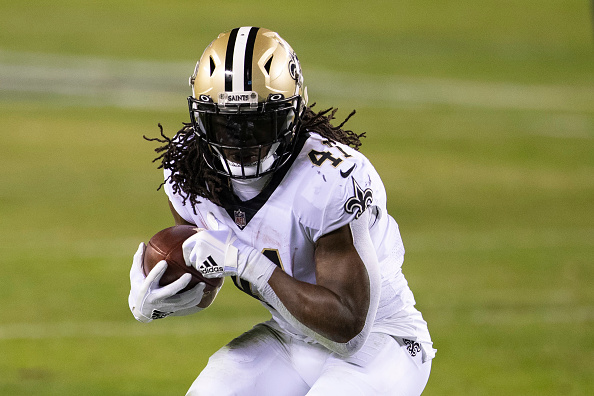 Welcome to the Super Wild Card Weekend edition of the Fantasy Alarm NFL Injury Report. The information contained in this article is accurate as per Thursday’s practices. While players who have questionable tags are often able to play, please continue to monitor their progress as game times approach. Fantasy Alarm will continue to post updated individual player news as it happens.

Trying to get injury-related information from Rams head coach Sean McVay has been nearly impossible all season long. According to ESPN’s Lindsey Thiry, in a video conference call with reporters McVay stated that he was “not gonna make an announcement on who is starting and who is not.” When asked later in the week if Goff would start on Saturday McVay again didn’t offer much, stating “we are going to work through that and we will see on Saturday.” Goff was equally mum as to whether he would be playing this week. The good news is that Goff has been able to practice on a limited basis this week and was seen making throws. He is officially questionable for Saturday’s game.

Head coach Ron Rivera had hinted that he might consider rotating Alex Smith and his backup Taylor Heinicke in and out on Saturday night. Smith has been a limited participant in practice this week. Heinicke has taken first-team reps and will be ready to play if needed. While Smith is expected to play, how effective he’ll be and how long he’ll actually be able to stay on the field is unknown. For what it’s worth, according to Kyle Stackpole, editor at @WashingtonNFL, Rivera said that Smith, WR Terry McLaurin (Ankle, Questionable) and RB Antonio Gibson (Toe, Questionable) “all looked good moving around.”

Kamara has been participating in Saints team practices remotely. He is eligible to join the Saints Sunday morning, and will be active against the Bears if he continues to test negative for the coronavirus. Based on a tweet he sent out saying “see y’all Sunday” Kamara is optimistic about his chances of playing this week.

Thomas was designated to return from the IR this week, and has been practicing on a limited basis. According to NFL Network’s Ian Rapoport he is likely to play, but you should carefully monitor his progress as game time approaches.

The Titans official injury report lists Brown as suffering from knee and hand injuries. However, he also reportedly aggravated a lingering ankle injury in Week 17. The Titans, held a walk-through on Wednesday, and listed Brown as limited. The team held a practice on Thursday, but Brown was a non-participant. Brown has been dealing with nagging injuries all season long and is likely to play against the Ravens on Sunday, but his situation should be monitored.

Beasley was inactive for the Bills’ Week 17 matchup against the Dolphins due to a knee injury and on Monday head coach Sean McDermott called him “week-to-week”. He did not practice on Tuesday or Wednesday. He was a limited participant in Thursday’s practice and is listed as questionable for Saturday’s matchup against the Colts.

Diggs was a limited participant in Tuesday’s walk-through, and missed the Bills’ Wednesday practice. He was also a limited participant in Thursday’s practice. Diggs called his injury “no major issue” on Wednesday but head coach Sean McDermott stated “we’ll just have to wait and see” if Diggs plays on Saturday against the Colts. He is listed as questionable. While there is a chance that both will be active, it appears that Diggs is more likely to play than Beasley.

Robinson is nursing a hamstring injury. He was a full participant in Wednesday’s practice, but did not practice on Thursday. This has been the recent norm for Robinson as this is the third week in a row that he has missed a Thursday practice. It seems that giving Robinson mid-week rest has helped him remain active on a weekly basis. He is expected to play on Sunday.

Mooney did not practice on Wednesday or Thursday and according to the Chicago Sun Times, he could likely miss Sunday’s game against the Saints. Watch his progress.

Evans, who hyperextended his knee in Week 17, took part in a limited practice session on Thursday and is officially listed as questionable for Saturday night’s matchup against the Washington Football Team. An MRI showed no structural damage to the knee and swelling has been minimal, but head coach Bruce Arians said Evans’ status would be “a game time decision.”

Smith-Schuster missed Thursday’s practice due to a knee injury. He’s had issues with his knee earlier this season and has been held out of practices before, but he’s ultimately ended up playing. Perhaps the Steelers are being overly cautious by keeping him sidelined but we’ll know more about the severity of this injury-based on his Friday (today) practice status.