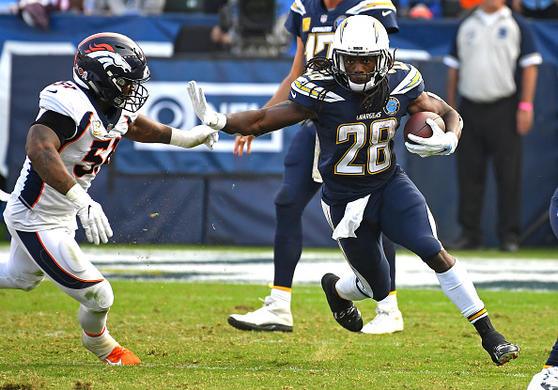 If there’s anything we fantasy football players need to remember, it’s that healthy running backs who’ve had at least a bit of success, don’t stay unemployed for too long. Jay Ajayi was medically cleared to play back in July, but reports this week say that he is “close to being game ready.” The Texans worked out former Lions RB C.J. Anderson this week. The Giants worked out some veteran RBs this week as well. All too often the two RBs that we fantasy football players start the season with as our starters are forced to miss time. Having a substantial amount of depth on our fantasy rosters at RB is one of the keys to a successful fantasy football season. Check out some more RB related news and observations from around the league: 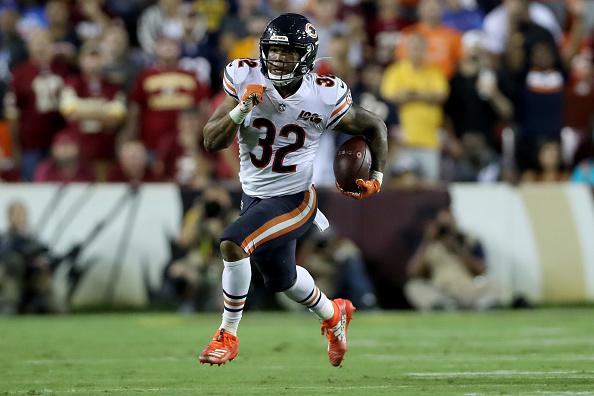 The Bears continue to confound David Montgomery owners. They continued to increase his snaps played percentage in Week 3, but even though they had a big lead for much of their Monday night game against Washington, they didn’t run the ball as much as many of us thought they would or should. Montgomery’s carries actually fell to 13, down five from Week 2. We’re hoping that the Bears finally devise a long term optimal offensive scheme which will take advantage of Montgomery’s skill set. Don’t be too hard on yourself if Montgomery is sitting on your bench when he has his first breakout game of the season.

Damien Williams and LeSean McCoy are again dealing with injuries leading up to Week 4. Darrel Williams would again have an opportunity for expanded playing time this week should either Damien Williams or McCoy either be limited or be forced to miss time. Follow this situation closely as game time approaches.

Melvin Gordon has finally ended his holdout. He was initially expected to be inactive this week, but with Justin Jackson expected to be sidelined for the next few weeks due to a calf injury Gordon will see some limited playing time. Austin Ekeler will still probably be the lead back for this week. Gordon will likely have a limited role as the Chargers wisely ease him back into his previous role. Only the most desperate fantasy owners in danger of getting a zero at the RB or flex spot due to the first bye week should start Gordon. He’ll be a must start as he slips into his old role as the Chargers’ lead back next week. Fantasy owners should hold on to Ekeler who is a valuable handcuff. Gordon has been susceptible to injuries in the past and players who’ve missed big chunks of practice and playing time like he has, tend to be prone to suffering soft tissue injuries. 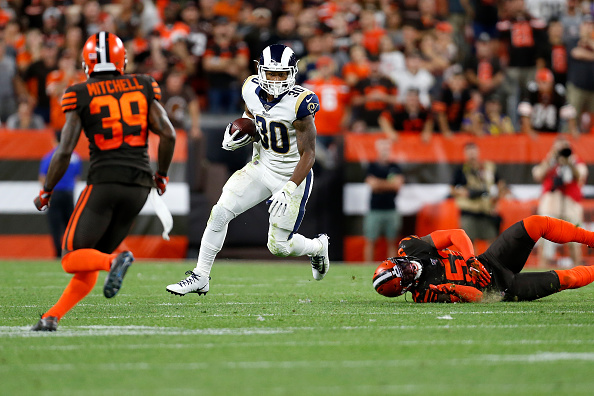 Todd Gurley played 73% of the Rams’ Week 3 offensive snaps, an increase of nine from Week 2. He’s averaged just under 15 carries per week thus far, after averaging a little over 18 carries per week the past two seasons. While we expected his carries to be limited, the fact that he has four pass targets on the season (zero last week) is surprising and disturbing for fantasy players owning shares in the Gurley man.

We knew the Vikings wanted to run the ball more this season, but while fantasy owners who invested in Dalvin Cook are ecstatic, can the Vikings continue to win by running the ball an NFL leading 61.31% of the time? Only time will tell. Cook is on pace to carry the ball 300 times this season and with his injury history, if you own shares in the third year Vikings back please do whatever you can to get Alexander Mattison on your roster as well.

In case you’ve been living under a rock and hadn’t heard, Saquon Barkley suffered a high ankle sprain in Week 3 and will be out for four to eight weeks. The Giants worked out veteran RBs Benny Cunningham , Fozzy Whitaker and Zach Zenner this week but as of Wednesday night, none of the three have been signed. As of now it looks as if Barkley’s handcuff Wayne Gallman will be the Giants’ lead back. Gallman’s obviously no Barkley but he has a semi-respectable 4.0 YPC on 169 rushing attempts and has shown the ability to catch the ball. He had a career 5.1 YPC in three seasons at Clemson and will have volume and an improved offensive line on his side. In a fantasy football environment where having depth on your fantasy roster is key, just about every RB with a pulse and a starting job has fantasy value. As long as you keep your expectations in check Gallman could play a role as a serviceable low-end RB2 or flex play on your fantasy squad.

Let’s keep an eye on the Seahawks usage of Chris Carson this week. Carson has carried the ball 15 times in each of the first three games, but has also had a fumble in each of the last three games as well. Carson fumbled three times all of last season. Rashaad Penny didn’t see any action last week due to a hamstring injury. With Penny out, C.J. Prosise played 55% of the Seahawks’ offensive snaps compared to 13% the week before. With Prosise being more of a third down pass catching option, and Penny potentially hindered by injury, Carson will likely have Week 4 to show Coach Pete Carroll that he deserves to continue to be the Seahawks’ lead back.

C. Jones - DL
KC
ESPN's Jeremy Fowler reports there hasn't been "much traction" on a long-term agreement between the Chiefs and unsigned franchise player Chris Jones.
Fowler does report that Jones has "kept in touch with the Chiefs as they hold virtual meetings." Absent a long-term agreement before the July 15 deadline, Jones will probably skip the majority of training camp.
Added Yesterday 7:57 pm (EST)
Added Yesterday 7:57 pm (EST)

E. Apple - DB
NO
Panthers signed CB Eli Apple to a one-year contract.
It's been 56 days since Apple's Raiders deal fell apart, and 71 days since he first agreed to terms with Las Vegas. Apple's public interest had been dead silent since the Raiders backed out of their agreement, but it is impossible to know what goes on behind the scenes of the coronavirus-affected market. Even though former first-rounder Apple has mostly been replacement-level to this point in his career, it's a nice addition for the Panthers' undermanned and unproven cornerback group. Apple is still three months shy of his 25th birthday despite entering the league in 2016. He could be a 1,000-snap player in Charlotte.
Added Yesterday 7:36 pm (EST)
Added Yesterday 7:36 pm (EST)

M. Judon - LB
BAL
Ravens re-signed LB Matt Judon to a one-year, $16.27 million contract.
Judon was labeled as a tag-and-trade possibility, but the draft came and went with nary a peep about Judon moving. Perhaps the Ravens would rather just go all in on 2020. The sides still have well over a month to come to a long-term agreement. Judon is no one's idea of a truly elite pass rusher, but he has 24.5 sacks over the past three seasons. Seeing as Judon is already going on 28, it wouldn't be shocking were the Ravens to let Judon walk after playing out his one-year tender.
Added Yesterday 7:32 pm (EST)
Added Yesterday 7:32 pm (EST)

E. Apple - DB
NO
Panthers signed CB Eli Apple to a one-year contract.
It's been 56 days since Apple's Raiders deal fell apart, and 71 days since he first agreed to terms with Las Vegas. Apple's public interest had been dead silent since the Raiders backed out of their agreement, but it is impossible to know what goes on behind the scenes of the coronavirus-affected market. Even though former first-rounder Apple has mostly been replacement-level to this point in his career, it's a nice addition for the Panthers' undermanned and unproven cornerback group. Apple is still three months shy of his 25th birthday despite entering the league in 2016. He could be a 1,000-snap player in Charlotte.
Added Yesterday 5:56 pm (EST)
Added Yesterday 5:56 pm (EST)

D. Hopkins - WR
ARI
Speaking Thursday, DeAndre Hopkins said he expects to post better numbers in Arizona.
"So myself, being a receiver, of course I see my stats going up," Hopkins said of Kliff Kingsbury's pass-friendly attack. "But I definitely see myself having one of my more productive seasons." Hopkins slumped to three-year lows across the board last season as the Texans seemed oddly stagnant on offense. Hopkins fills a massive need as a bonafide No. 1 receiver for Kingsbury and Kyler Murray. The Cardinals want to run four-wide attacks and get the ball down field. Personnel made it difficult to do in 2019. Hopkins changes the game for 2020. He's a safe top-five option at wide receiver, with the upside for a No. 1 overall finish.
Added Yesterday 4:51 pm (EST)
Added Yesterday 4:51 pm (EST)

P. Mahomes - QB
KC
The NFL announced Thursday that EA Sports will remain its exclusive video-game producer through at least 2025.
The NFL actually opened up the bidding this time around, but EA will remain the league's exclusive home, as it has been since an agreement was struck in 2004. NFL spokesman Brian Rolapp said the competition was not close. “EA made the most compelling case,” Rolapp said. "And beat out the competition pretty soundly.” EA reportedly unveiled a “plan of innovation for the next handful of years." A lack of innovation has been a common criticism, but too much innovation leads to things like the vision cone. Hopefully a happy medium can be found in the next few years.
Added Yesterday 4:37 pm (EST)
Added Yesterday 4:37 pm (EST)

N. O'Leary - TE
LV
Raiders placed TE Nick O'Leary on the reserve/NFI list, ending his season.
It means O'Leary got hurt working out on his own. O'Leary was signed as offseason depth on March 21. His loss won't be felt in the Raiders' deep tight end corps. Provided he is not dealing with something like a torn ACL or ruptured Achilles' tendon, 27-year-old O'Leary will likely end up getting cut loose with an injury settlement.
Added Yesterday 4:35 pm (EST)
Added Yesterday 4:35 pm (EST)

J. Hill - RB
BAL
Speaking in a Thursday Zoom session, Ravens coach John Harbaugh said he envisions roles for all four of his running backs.
That is Mark Ingram, J.K. Dobbins, Gus Edwards and Justice Hill for those keeping score at home. Harbaugh's comments came in the context of discussing Hill, whom he said he expected to "make a big jump" in 2020. "Is that really a problem?" Harbaugh asked rhetorically. "Having four guys who can break long runs and make guys miss?" They're encouraging comments for those holding onto Hill in dynasty leagues, but the reality is, it is going to be very tough for Hill to carve out a meaningful role behind Ingram and Dobbins, especially since Dobbins can also catch passes. Lamar Jackson also barely targeted his running backs in 2019. Hill remains six months shy of his 23rd birthday, but his role in the Ravens' scheme of things is hard to spot right now. He needs to run circles around Dobbins on third downs this summer.
Added Yesterday 4:24 pm (EST)
Added Yesterday 4:24 pm (EST)