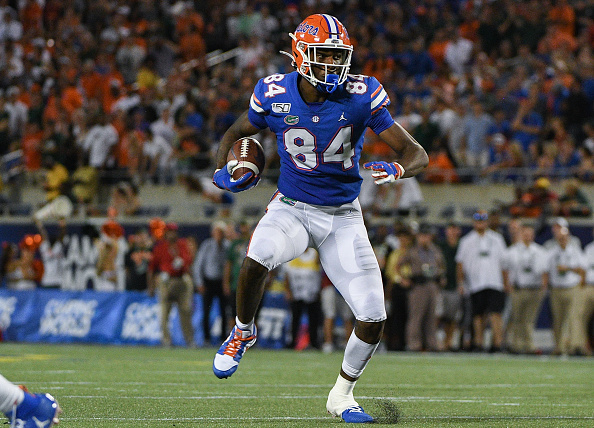 Historically, tight ends take time to develop in the NFL before getting on the field, let alone be a fantasy contributor. This is part of the reason you usually don’t see the first one off the board in dynasty rookie drafts until the second round. Last year was an extremely weak class after T.J. Hockenson and Noah Fant were taken in the first round of the NFL draft in 2019. Both of those players generally went in the first round of rookie drafts that year. In 2020, I was in leagues where the first tight end taken (usually Cole Kmet) wasn’t until the late third round.

As a result, I would expect dynasty owners to be thirsty for the position this year. Beyond the obvious top player in this class, there are a couple intriguing prospects, but they have their flaws. I would much rather go after the secondary tiers of the other skill position players than tight end in the second round of rookie drafts this year. Owners who miss out on the No. 1 player in this class may end up reaching in that range, which could create value at other positions.

The top player in this class is no secret as he is a young, generational talent who produced at a big school. Pitts didn’t do much as a true freshman but broke out as a 18-19-year-old sophomore with 54 receptions for 649 yards (12.0 YPC) and five touchdowns in 13 games. His 2020 as a 19–20-year-old is even more impressive when you consider that his 43 grabs for 770 yards (17.9 YPC) and 12 touchdowns came in just 8 games, easily leading the nation in yards at his position. His yards per catch average was absolutely insane for a tight end on that volume, and is indicative of his downfield/yards after the catch prowess. He’s a good enough blocker that it won’t prevent him from getting on the field, and he has the physical ability to develop in that area regardless. Not that you want him blocking much anyway, as he has the ability to split out wide or line up in the backfield and create mismatches all over the field. Unlike most rookie tight ends, his talent is such that you can expect short term returns in addition to long term dominance (he won’t be 21 until October).

The question isn’t whether Pitts should be the first tight end off the board, it is how high do you take a seemingly generational player at a position that generally doesn’t garner much dynasty draft capital? Even with the most recent example of a tight end going in the top 10 of the NFL draft in Hockenson, he was regularly available in the bottom half of the first round in rookie drafts. Pitts is in another tier of talent, however, a tier that may not have been touched since Vernon Davis came out in 2006. Ja’Marr Chase, Najee Harris, and Travis Etienne are all the only players I would 100% take over him in rookie drafts. Think of it this way - if you knew you could have the positional advantage afforded by a Travis Kelce or George Kittle for the next 10 years, where would you value that? Pitts is that good, and tight end offers less blue-chip talent than any other skill position. If I’m picking at 1.04, he’d have to be in consideration.

A traditional in-line blocking tight end, Freiermuth does most of his damage bullying people after the catch and in the red zone, although he is a capable seam stretcher when asked to be. He has a massive frame that he leverages into strong blocking, something which should get him on the field right away in the NFL. His freshman season doesn’t jump off the page as he never caught more than three passes in a game, but eight of his 26 catches overall went for touchdowns, showing his scoring potential. His best statistical season came as a 20-21-year-old sophomore in 2019 when he caught 43 balls for 507 yards (11.8 YPC) and seven touchdowns. It should be noted that he was on pace to have even better output in 2020 until surgery cut his already shortened season into just four games. In those four games he caught 23 balls for 310 yards (13.5 YPC) and one touchdown, including a dominant seven for 113 (16.1 YPC) line in his final college game against Nebraska where he had easily the longest catch of his career (74). He would be in contention for TE1 in a normal year, and is expected to pick up late first round NFL draft capital in his favor. He should be a fantasy starter at some point, but I do not see the elite upside his “Baby Gronk” nickname would imply. I would start considering him in the late second round of rookie drafts. He’s a full two years older than Pitts.

Jordan is a different flavor of tight end than Freiermuth, as the Hurricanes used him as more of a “move,” lining him up out wide and as an H-back in addition to being in-line. Jordan also has incredible youth: he doesn’t turn 21 until July. While his 32-287-4 line from his 2018 freshman season may not stand out, it is impressive when you consider he was an 18-year-old playing a tough position to transition from high school against a Power Five schedule. He built on those numbers the last two years and established himself as an explosive playmaker with lofty yards per catch averages for a tight end. In 2019 as a 19-year-old sophomore, he caught 35 balls for 495 yards (14.1 YPC) and two touchdowns, following it up in 2020 with a 38-576-7 (15.2 YPC) line as a 20-year-old junior. His 4.64 40-yard dash at Miami’s Pro Day was not bad for a guy his size. From a pure receiving standpoint, he has more upside than Freiermuth, but I worry about how he will be used in the NFL relative to his skillset (ex: Evan Engram ). That being said, I would understand someone preferring Jordan of the two, I just lean towards Freiermuth’s blocking skills getting him on the field more often. The two comprise a clear second tier behind Pitts for me, although neither are anywhere close to Pitts’ caliber.

After transferring from Temple, Yeboah broke out in his only season for Ole Miss as a 21-22-year-old redshirt senior, gaining almost as many yards in 2020 as he had in his entire college career prior. He did so by turning himself into an explosive playmaker, averaging 19.4 yards on his 27 grabs, good for 524 yards and six touchdowns. While we don’t have a 40 time from his Pro Day, he had a 9’8” broad jump and 34” vertical, both solid for his size. That athleticism showed itself in the form of yards after the catch and seam stretching grabs in 2020. He also produces in the red zone where his massive frame makes him an ideal target (five of his 19 grabs in 2019 went for touchdowns). His size helps make him an above average blocker. If you are looking to swing for the fences in the third round on upside, this is probably your guy. The nature of the tight end position makes his late breakout age easier to swallow.

Like Jordan, Tremble is a move tight end with age on his side as he doesn’t turn 21 until June. He had significantly less production than Jordan in college, hence why I have a tier between them, but he may be a better athlete: 4.60 40-yard dash and 10’2” broad jump at Notre Dame’s Pro Day. The Fighting Irish have had a strong TE core over the last couple years that may have hampered his production, but it’s hard for me to get too excited about a player who only caught 35 balls for 401 yards (11.5 YPC) and four touchdowns in his entire college career, regardless of who he was playing with. He would have to end up in a perfect landing spot to be considered fantasy relevant anytime soon, but if you are throwing darts in the third and fourth round of rookie drafts anyway and need a tight end, you could do worse than gambling he develops his game given his youth.

Long is probably a better NFL prospect than he is for dynasty/fantasy one given his in-line skillset. He put up solid numbers for the Eagles, with a 28-509-2 (18.2 YPC) line as a sophomore in 2019 and a 57-685-5 tally in 2020 as a 22-year-old junior. I think that speaks more to BC’s style of play and lack of other pass catchers than anything else, however. Despite his lofty yard per catch average from 2019, I do not see Long having enough athletic savvy to consistently get open at the NFL level or be a downfield playmaker. He ran a 4.70 40-yard dash at his Pro Day, and doesn’t show a ton of explosiveness on his tape. He offers little after the catch. His blocking, however, should at least allow him the opportunity to get on the field and see what he can do at the next level. Ultimately, I think his ceiling is a Jack Doyle type: serviceable but never a guy you feel good about starting in your fantasy lineups.

***If you liked what you read here, be sure to take advantage of our Early Bird Special and get the Fantasy Alarm NFL Pro Package today! Go to fantasyalarm.com/nflpro and use the promo code NFL50 for an immediate 50% off***