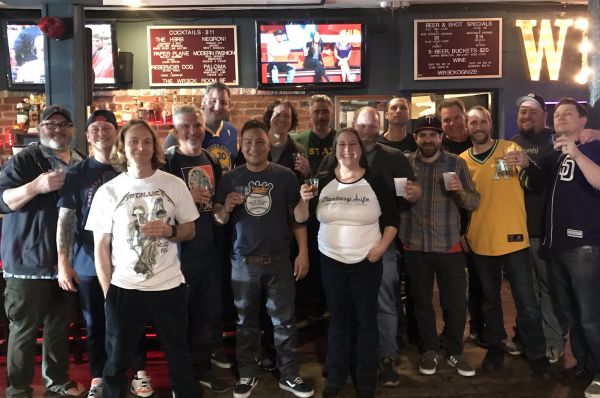 If you aren't familiar wwith the Bay Area Roto Fantasy League, allow me a quick background here to set the tone -- about five years ago, there was a guy named Tod who owns a bar in San Francisco called the Wreck Room. Tod and a few of his regulars were not only avid fantasy baseballers, but they all listened to SiriusXM Fantasy Sports Radio. Connections were made via Justin Mason who runs Friends With Fantasy Benefits and an idea was born where Tod and some of the guys from the bar competed against those who work in the fantasy industry and live in the Bay Area. At the draft in our inaugural season, It was the late, great Lawr Michaels (and yes, we burned several for him) who came up with the acronym to name the league. A few of the names have changed throughout the years due to schedules, moves and the sad passing of Lawr, but the core remains fairly intact.

This season, our fantasy baseball league is a 14-team, roto league with standard 5x5 categories, except we use OBP instead of batting average. It ios a two-catcher league with all the other usual positions. Waivers are done via FAAB bidding and yes, we are allowed to make trades. Allow me to introduce the cast of characters and then we can hit the draft.

The Participants (in draft order):

Brian Entrekin (a.k.a. KC Bubba) -- freelances for a number of spots so start at FantasySportsDegens.com; seemed to be up in my queue an awful lot in this one

Khang Do -- baseball musings at irotohead.com; only one who managed to maintain his energy level throughout a seven-hour draft

Joe G -- defending champ; no one spoke to him because of that

Sammy Reid -- writer/podcaster for Rotogrinders; loves Wil Myers WAY too much for his own good.

Danny Zarchy -- former podcaster at GiantsPod.net; biggest dude in the room so you don't want to take his guys.

Howard Bender -- easily the best looking guy in the room

Justin Mason -- supreme leader at Friends With Fantasy Benefits; brought his wife, Danielle, to protect him from the rest of us

Zach -- sometimes NFBC partner with Matt Davis; man after my own heart wearing slippers to the draft.

Dalton Del Don -- longtime fantasy writer at this place you may have heard of called Yahoo; former LABR P.I.C. of mine

So now that we're all well-acquainted with those who took part, here's a look at the final Draft Board: 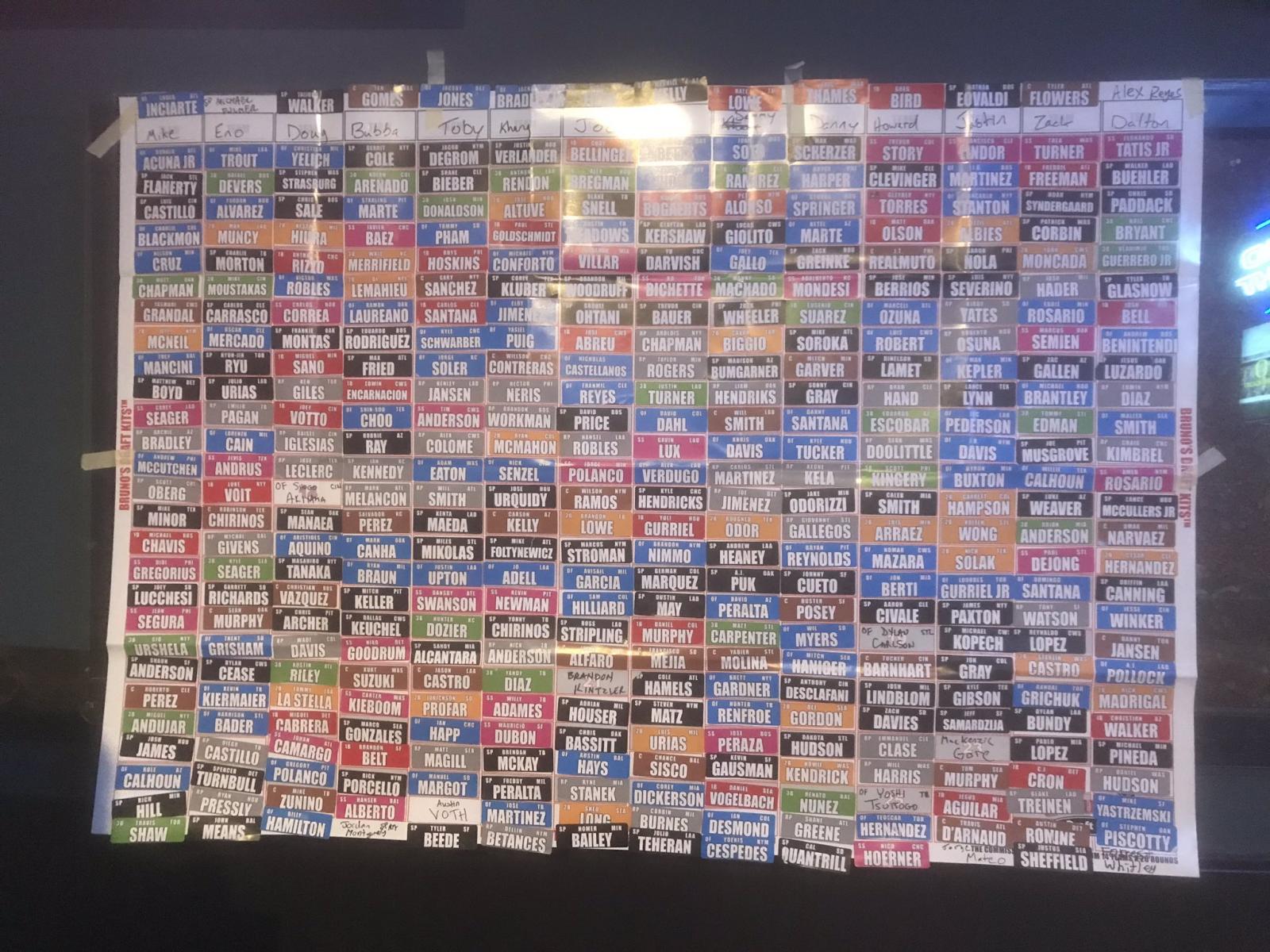 *the pick above our names was actually each person's final pick

Now I could regale you with stories of who yelled at who for stealing their players, but this thing was a seven-hour marathon and the details are all a little hazy. After all, it was at a bar, there was a round of shots before the draft and there were several smoke breaks taken while we waited for it to come back around to our respective picks. There was no timer which, in retrospect, was probably not a good idea. Next year, I am going to grab that mini-hourglass from our Boggle game and implement its strict use.

However, what I did do...because there was so much time on my hands...was I decided to bring you inside my mind during each and every pick. After all, isn't that what you want to know anyway? How many times have you looked at an industry draft board and said, "what the heck was he thinking when he made that pick?" So what I did was make my pick and immediaately wrote down the first thing I thought of when making my selection. Some of it might be a little tongue-in-cheek, but if you know me even just a little bit, you'll understand everything. Either way, I actually really like this squad. i mean REALLY like it!

Round 1: Trevor Story , SS -- Jeff Erickson really likes him and I really like Jeff
Round 2: Mike Clevinger , SP --He was my 2019 AL Cy Young pick. Couldn’t possibly get hurt again, could he?
Round 3: Gleyber Torres , 2B -- Let’s go Yankees!
Round 4: Matt Olson , 1B -- Buncha A’s fans in this draft. No way he makes it back to me.
Round 5: J.T. Realmuto -- He’s the No. 1 catcher so suck it!
Round 6: José Berríos -- Pitching angry this year.
Round 7: Marcell Ozuna , OF -- Bounce back Brave
Round 8: Luis Robert , OF -- 2020 AL Rookie of the Year
Round 9: -- Dinelson Lamet , SP -- Everyone loves this guy so it’s an easy “look at me” pick. I’m an attention whore. Interview me and I’ll tell you all about it.
Round 10: Brad Hand , RP -- It was a band called Semisonic that did the song “Closing Time.” #WhatDidYouLearnToday
Round 11: Eduardo Escobar , 3B -- How the heck is he still available?
Round 12: Sean Doolittle , RP -- Duke of Lizards! I make it all true for you!
Round 13: Scott Kingery , 3B/OF -- One of these years, I’ll be right.
Round 14: Caleb Smith , SP -- Best value pick ever once he’s traded. But I’ll take the strikeouts for now.
Round 15: Luis Arraez, 2B/OF -- Pretty sure I heard Rocco Baldelli say he likes Arraez as much as he likes Phish and he really likes Phish
Round 16: Nomar Mazara , OF -- In the 16th round? For my fourth OF? Um. Yeah.
Round 17: Jon Berti, SS/3B/OF -- Speed with eligibility EVERYWHERE
Round 18: Aaron Civale, SP -- Tito Francona loves this kid
Round 19: Dylan Carlson, OF -- 2020 NL Rookie of the Year
Round 20: Tucker Barnhart , C -- Two-catcher league with OBP? Yeesh!
Round 21: Josh Lindblom , SP -- Former big-league prospect turned KBO star with low mileage & a six-pitch arsenal
Round 22: Zach Davies , SP -- Everything the Brewers thought he was finally shows for San Diego
Round 23: Emmanuel Clase, RP -- Handcuffing Hand
Round 24: Will Harris , RP -- Cuffing Doolittle
Round 25: Yoshitomo Tsutsugo, 3B/OF -- Crowded in Tampa, but Rays don’t just hand out bad contracts to free agents; also like saying his name in the voice of Sato from the Karate Kid Part II
Round 26: Teoscar Hernández , OF -- Depth with some power upside
Round 27: Nico Hoerner, SS -- Infield depth with potential
Round 28: Greg Bird , 1B -- He’s gonna win the job in Texas and haunt the Yankees

Be sure to give everyone on this page a follow on Twitter and feel free to hit any of us up if you have any questions about this draft.