**FREE PREVIEW** Howard Bender takes over the Bullpen Report this week and shows you which closers are in danger of losing their jobs, who's getting all the holds and which bullpens to target against in DFS. 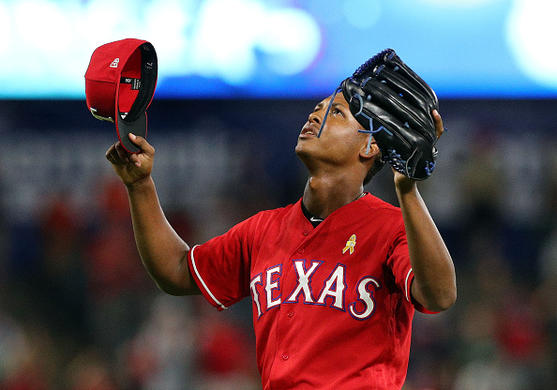 You want the good news or the bad news first?

The good news is the turnover rate in bullpens is the lowest it’s been in about four or five years. Injuries have actually been the leading cause for turnover this season, with a splash of managerial interference, as opposed to years past when some guys couldn’t save a game if their lives depended on it.

It does, doesn’t it? Atop the saves leaderboard, you’ve got guys you’d expect to see – Kenley Jansen , Brad Hand , Jordan Hicks and yes, even Kirby Yates . He was highly touted by a number of Fantasy Alarm analysts during the spring. But when Will Smith and Blake Parker are sitting above Aroldis Chapman , there’s still an underlying feeling that something just isn’t right.

Nevertheless, you came here to find out what the latest scoop is, not my dissertation on why we should all be moving to a Saves + ½ Holds format. I’ll save that for another time. Let’s just get to it.

Might as well kicks things off in Texas where manager Chris Woodward has removed José Leclerc from the closer’s role after the right-hander blew a save against the Pirates on Tuesday when gave up three runs in one inning of work. That brought the total to 10 runs over 6.1 innings (nine appearances). No bueno, right? This now opens the door for Shawn Kelley who’s given up just two runs all year which stretches over 12 innings. He should be the first in line for save opportunities right now, but don’t rule out Chris Martin who got a mention from his manager when he made the Leclerc announcement. He’ll be the guy to spell Kelley if he’s pitched too many days in a row or has any struggles. If you’re making waiver claims, grab Kelley first and make Martin your contingency pick.

Keep a close watch on Seattle reliever Roenis Elías who is currently dealing with some sort of soreness and hasn’t made an appearance since April 26. The team made an announcement Tuesday that Elias wasn’t available due to this mysterious soreness and the team failed to disclose exactly where Elias was hurting. They claim he won’t need an IL stint and are calling him day-to-day, but it looks like Anthony Swarzak will be the guy they lean on should a save opportunity arise. Keep a watchful eye here.

When Cody Allen was removed from the closer’s role in Los Angeles (the Angels side of town, that is), it was for obvious reasons. No blown saves notwithstanding, you can’t allow runs in five of six appearances and not worry your manager to the point where he’s ready to yank you from the job. But now we have to look at it from an injury standpoint after the team placed Allen on the 10-day IL with a back issue. Is that the chicken or the egg? Is the back issue just an excuse or is it for real and that’s what led to the nightmarish performances? We’ll have to keep a close eye on his eventual return, but in the meantime, we can keep focusing on the Hansel Robles /Ty Buttrey at the back-end of the bullpen. If looking to makes claims for saves, Robles is the way you should lean.

Braves righty Luke Jackson makes for a real interesting add if, for some reason, he’s still available on your waiver wire. He’s gone 12-straight appearances without allowing a run, picked up his first save this past weekend after getting the final two outs of an inning started by A.J. Minter and is likely to find himself in line for save chances moving forward. Overall, Minter is the better pitcher, but he’s had some recent struggles and there’s always the fact that he’s a southpaw. Most managers like to use their lefties in specific late-inning situations rather than leave them for the ninth. I’d consider this a shared role for the time being and wouldn’t be surprised if, ultimately, they hand the ninth to Jackson on more of a full-time basis.

Other shared situations to keep tabs on:

Tampa Bay Rays – José Alvarado has opened the door for both Emilio Pagán and Diego Castillo after allowing runs in each of his last two appearances in the last Boston series. In this recent series, it was Pagan who got the saves work while Alvarado picked up a pair of holds. Kevin Cash could easily flip these two, depending on lefty/righty match-ups, so we’re not dismissing anyone just yet.

Kansas City Royals – Ian Kennedy picked up the save during the Royals’ recent doubleheader and it would appear that, after allowing just one run over his last 10 appearances, he is back in the mix with Wily Peralta and Brad Boxberger . It doesn’t look like manager Ned Yost has any real preference, so just expect him to throw the hot hand or the one that is less tired.

**And don't forget to bookmark the Closer Grid which is updated regularly and as needed.

Always keep in mind that winning teams are usually the ones who see the most holds. Obviously the top teams in the league are the ones you would expect to see the most action as they tend to be the ones who take command of the games most, but sometimes, you can get away with using some random guys if their team runs into a soft part of the schedule and goes on a winning streak. Here’s a look at which teams have brought in the most holds over the past week: 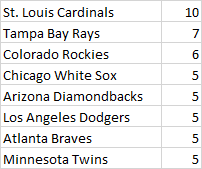 Those who have doubled up on holds during this time include relievers such as John Gant , John Brebbia , Bryan Shaw , Andrew Chafin , Taylor Rodgers, José Alvarado and Seung Hwan Oh. They’ve been some of the most active relievers this past week and should continue to see the work as their teams continue to win.

Teams with upcoming soft spots in their schedule next week include: Boston, Tampa Bay, Chicago Cubs, New York Mets and the Oakland A’s.

Overworked Bullpens to Target in DFS

One of the most underrated aspects to determining which stacks you may want to employ on a nightly basis is the opposing team’s bullpen workload. If you stack Astros and they chase the starter after four innings, who are they facing for the next five? If you want your stack to continue producing, you need to target teams whose bullpens have not only been overworked, but are also struggling to keep runs off the board. Check out the chart below and follow the yellow highlights.

C. Morton - SP
TB1
Rays declined RHP Charlie Morton's $15 million option for 2021.
A $15 million salary for Morton in 2021 is perfectly reasonable, but it's not terribly surprising that the Rays chose not to pick up the option. General manager Erik Neander did say that the club would be interested in bringing the right-hander back at a lesser salary commitment. Morton will turn 37 in a couple weeks and has discussed the possibility of retirement, for what it's worth.
Added 11:34 am (EST)
Added 11:34 am (EST)

R. Braun - RF
MIL
Brewers declined OF Ryan Braun's $15 million option for 2021.
Braun's contract either called for a $15 million mutual option for 2021, or a $4 million buyout. Unsurprisingly, it appears the Brewers have decided for the latter. The soon to be 37-year-old hit just .233/.281/.488 in 39 games while dealing injuries to his back and finger. It seems plausible that Milwaukee could have interest in Braun at a significantly lowered rate, but it's also possible that the former MVP will either be playing with a new club in 2021 or possibly decide to retire.
Added Yesterday 8:59 pm (EST)
Added Yesterday 8:59 pm (EST)

Z. Britton - RP
NYY1
Yankees exercised Zack Britton's $14 million option for 2022.
With the Yankees picking up the 2022 option, Britton's $13 million player option for 2021 becomes locked in. The left-hander has posted an ERA below 2.00 in each of the last two seasons, and it was 1.89 in 20 games in 2020 with a 16/7 K/BB ratio over 20 appearances with a 1.00 WHIP and .174 BAA. Britton will be a high-leverage reliever again for the Yankees in the next two years, and has a chance to earn save chances -- depending of course on Aroldis Chapman's health/involvement with the organization.
Added Yesterday 6:59 pm (EST)
Added Yesterday 6:59 pm (EST)