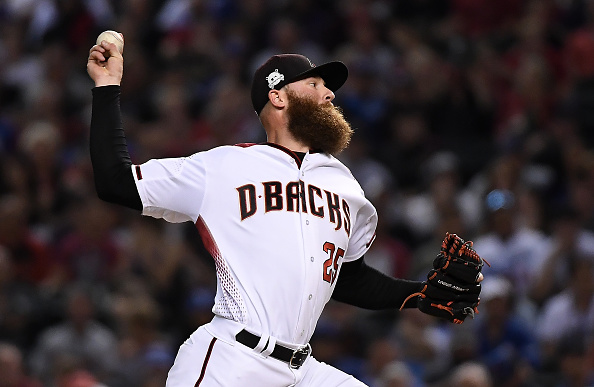 Scouting pitchers to target in your fantasy baseball drafts can be a tough task, especially if you’re new to the game. Obviously, we’d all like to only draft starters like Max Scherzer and Corey Kluber and closers like Kenley Jansen and Craig Kimbrel, but unless you’re willing to sacrifice your hitting, something we do NOT recommend, you’re not going to be able to. But as we’ve said before, you can still build yourself a winning fantasy pitching staff without over-investing in aces. The key is to know what statistical benchmarks you should be using in your selection process.

Dissecting pitchers tends to be a lot more complex than it is for hitters. For hitters, your primary focus is the counting stats. A guy can either hit the ball or he can’t. If he strikes out a ton, unless he’s mashing bombs like Aaron Judge, you probably want to avoid him. For pitching, it’s a lot more complex as there are a number of other factors in play, defense for one, which could negatively impact his totals. There have also been a number of metrics created to focus in on a pitcher’s skill-set independently of his surroundings. The fantasy community doesn’t use them as categories, but studying those peripheral stats is how you want to scout your arms.

To assist you in your process, you will see below a list of baseline targets for a number of pitching peripherals. You’re looking for skills over results as you look ahead to the 2018 season. A guy could appear to have had a rough season with a 4.42 ERA, but if his peripherals are strong we can probably expect a change in ERA for the better, especially if other factors have changed such as a new ballpark or improved defense behind him.

Simply stated, the strikeout is a sign of a pitcher’s ability to dominate hitters. The fewer balls that are put in play, the less likely a batter is to get on base. The strikeout also happens to be one of the standard categories in most, if not all, fantasy leagues. While the benchmarks are set for the minimum of what you’re looking for, you always want to set your sights a little higher whenever possible. If the benchmark for K/9 is 7.75 and the average for starters is 7.96, I’ll start with a mark of 8.00 as my minimum and only settle for the benchmark when necessary.

Free passes are the bane of my existence when it comes to pitchers. Not only are you putting more runners on base, thereby increasing your chances to allow runs, but your pitch count is rising at an alarming rate. In this age of pitch counts, innings limits and the coddling of starters, a guy who walks too many batters isn’t going deep into games and, in addition to potentially blowing up your ratios, have less of a chance of earning a win or throwing a quality start. It’s what makes a lot of these young starters a bigger risk to you. Rookies who strike out a ton of guys also tend to have high walk rates because major league hitters aren’t just hacking away like so many Double and Triple-A batters.

Everything just stated above with regard to young power arms is even more evident here with looking at K/BB numbers. Utilizing this stat should help you weed out some of the young arms who may have great stuff but struggle to find the strike zone. Think early Trevor Bauer, Tony Cingrani and, even more recently, Blake Snell.

Who doesn’t love a pitcher with a pitcher with a strong ground ball rate? You put them in front of a solid defense and you’ll see some dominant totals by year end. Look at Dallas Keuchel, Marcus Stroman and Scott Alexander. Whether it’s a starter or a reliever, the high ground ball rates and subsequent high GB/FB ratios are what you want. There’s a reason their ERA’s always look so tasty and why they’re closer to the top of the leaderboards for fewest home runs allowed.

Now that we’ve covered the baseline numbers for the peripherals, it’s time to start looking at which arms to target. Just like what was said in the strategy article, “Know Your Metric Benchmarks,” you are striving for numbers better than the baselines. Your baselines should be the minimum you’ll accept of any number. Now obviously you’re not going to be able to roster more than just a couple of pitchers who meet all the above baselines, so there will be some give and take, but you can certainly filter out names that meet one or two but come pretty darn close in the others. Big thanks to our friends over at Baseball-Reference.com for making this easier to put a list together.

While the list just above offers a really nice array of starters ranging from early-round aces to late-round grabs, this list is considerably shorter, just 18 players long. However, you still have a really nice cross-section of pitchers and depending on where (what spot in the order) and against whom you are drafting, you have a fantastic shot at grabbing multiple hurlers on this list.

Now let’s go to the bullpen

Relievers: 8.50 K/9 or better, 2.75 BB/9 or lower, 2.75 K/BB or better (minimum 40 innings pitched). Surprisingly, there were only 38 relievers who qualified here. Last season there were over 60 in total. The question is, how is there such a strong year-to-year discrepancy? It’s the walk rate. Perhaps a 2.75 or lower K/9 was a bit ambitious. Still, it’s a nice group of relievers from which to choose.

So with such a limited group above, let’s see what happens when we lower the bar on the walk rate while including the GB/FB.

OK, so that gave us a little more expansive a list as this time, we’ve got 51 relievers from which to choose. Allowing for a slightly increased walk still gives us a strong list of candidates without killing us in what will eventually be the WHIP category.

Finally, let’s hone this last search a bit more and include the ground balls.

It narrows down the list to just 16 relievers, but again, a decent group to pick from when you’re looking to add players throughout the season.

So just to put a bow on all of this, there are certain things to remember when scouting pitchers for a fantasy baseball draft. You’re looking for a strong strikeout rate, as few walks as possible (reasonably speaking, of course), a strong strikeout to walk ratio and as many ground balls as you can muster. Using pitchers of this caliber, whether starter or reliever, and you should be able to not only build yourself a solid staff, but you’ll have plenty of targets on the waiver wire who will help augment your efforts in each of the primary fantasy pitching categories.