The Morning Buzz: May 2

Howard Bender takes a look at an increase in home runs, stolen bases and some of the MLB player trends fantasy baseball owners should be monitoring throughout the season. 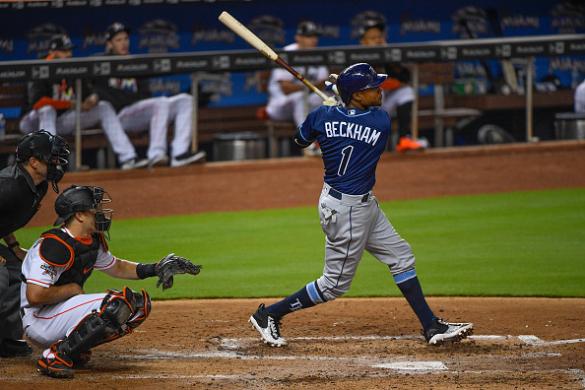 While the Morning Buzz remains a seasonal fantasy column, we cannot ignore the fact that the DFS gods really screwed with us last night. As we normally see on a night when Clayton Kershaw pitches, the safe play to cash is to use the Dodgers hurler in your lineup and find your cheap plays in all the nooks and crannies of the MLB slate’s various lineups. When Tigers centerfielder, Tyler Collins went yard for a three-run shot early in the night, it looked like business as usual.

However, as the night ran on, fewer and fewer cheap bats came through for their owners. Some of our favorite plays like Josh Bell, Scott Schebler, Cameron Rupp and Jon Jay came up way short of production, but the worst of it all, Kershaw himself, failed to deliver. Now, no one is investing a ton of money into these bats, so to see many of them fail is to be expected. But Kershaw? What the f---?

It’s almost impossible to criticize a guy like Kershaw, especially when he’s 4-2 on the season with a 2.61 ERA, a 0.87 WHIP and a 44:3 K:BB over just 41.1 innings, but look a little closer and there’s one glaring issue. Yes, the home run. With another pair of homers allowed, Kershaw has now given up six long balls on the season. Compare that to the eight he allowed last season over 149 innings and the increase is a little alarming. Maybe home runs are up across the board this season, but usually you can credit that to the thinning talent in the pitching pool given the number of injuries we’ve seen this year, but in Kershaw’s case, there’s some head-scratching going on.

This isn’t meant to freak anyone out and no, I do not recommend trading Kershaw unless you either have to or the deal will lock up your league title for you, but you should definitely take notice when you’re evaluating your team’s pitching needs. All too often, fantasy owners assume they’re well-covered when they own an ace like Kershaw and focus more of their energy on their offense. That just shouldn’t be the case. Just ask those who drafted Madison Bumgarner and Noah Syndergaard early and ignored starting pitching for another five or six rounds after. We may only be a month into the season, but it’s pretty clear we are not playing in the Year of the Ace.

Phillies starter Vince Velasquez needs to do a better job of mixing in his offspeed stuff and learning how to fool hitters more. His fastball is great as evidenced by 18 of his 26 strikeouts coming off of it, but opposing batters have chased 31.2-percent of Velasquez’ fastballs outside the zone (13th overall in MLB) and at some point, they’re going to stop. They’re just going to simply wait for him to groove it right down Broadway and tee off once it does. For a guy who has induced a 66.7-percent groundball rate off his offspeed stuff, he needs to learn how to trust it, and his defense, more.

Those of you outside of Yahoo leagues waiting for Kyle Schwarber to add that catcher eligibility, you just got one step closer last night. During a double-switch, manager Joe Maddon put the big boy behind the plate briefly for the first time this season, so for most leagues, you just need this to happen four more times. Of course, it took all this time for it to happen, so even with a five-game eligibility mark, it could be tough. It will also be tough if this guy continues to hit this poorly at the dish. After another 0-for-4 last night, he’s batting just .196 on the year. Even in OBP leagues, that .322 mark is a colossal disappointment. How the heck is this guy still leading off?

Maybe it’s an early-month thing for Seung-Hwan Oh, but he got tagged again last night, this time by Travis Shaw. It wasn’t a save situation and it was a little vexing as to why manager Mike Matheny felt the need to send him back out for the 10th, but lo and behold, that’s what happened. Again, this won’t affect his standing as the Cardinals closer, so you Trevor Rosenthal stashers and just sit on him for a whole lot longer.

This probably doesn’t need to be said, but just in case there are some waiver hounds out there chasing saves, there is no closer controversy in San Francisco with Derek Law grabbing a one-out save yesterday. Yes, Mark Melancon blew the save Sunday night, but that was coming on the heels of three-straight days just before. Four innings in five days is a lot for a closer and manager Bruce Bochy just want to give him a day off. Melancon will be just fine moving forward and if you know anything about Bochy as a manager, you know he likes to stick with one guy.

While Lance McCullers’ numbers may not appear all too tasty right now – 4.08 ERA, 1.30 WHIP – he looks primed for a big breakout this season. Last night was his second double-digit strikeout performance and he’s now sporting a 46:11 K:BB over just 35.1 innings this season. Of his six starts, he had two bad outings in which he allowed a total of 10 runs over 9.1 total innings, but in his other four starts, we’re looking at just six earned runs over 26 innings (2.08 ERA) with a 35:7 K:BB. Tough to even mention Cy Young possibilities with Chris Sale and Corey Kluber floating around the American League, but we’ve seen weirder stuff happen, have we not?

It looks like the Wally Pipp award is going to be handed to Rays infielder Matt Duffy pretty soon. Duffy is expected to come off the disabled list this week, but how do the Rays take Tim Beckham out of the lineup? They can’t. He may have an awful 32-percent strikeout rate, but he’s still batting .274 with four home runs, 10 RBI, 12 runs scored and a stolen base. The numbers are far from gaudy, but if you look at how this guy gets rallies started, you’d understand. Thanks to an outstanding 39.3-percent line drive rate over the last two weeks, Beckham is posting a .450 average with an OPS of 1.522 with the bases empty. His plate discipline is still a little weak and the numbers will drop if he doesn’t rein in the whiffs and start drawing more walks, but for right now, these numbers are more than good enough to keep Duffy from a regular job.

The speedsters were out and about last night as Billy Hamilton abused the Pirates again with three stolen bases while Dee Gordon picked on his in-state rivals, the Rays, with three of his own. It shouldn’t come as much of a shock for either burner as Rays catcher Derek Norris has a horrible arm to second while the Pirates backstops (it was Chris Stewart and not usual punching bag Francisco Cervelli) have allowed a league-high of 26 stolen bases this year with just four caught-stealings. Brad Miller tried to return the favor with two of his own off J.T Realmuto, while Jose Altuve, Jacoby Ellsbury, Kevin Pillar, Nick Castellanos and Tucker Barnhardt registered one of their own. For what it’s worth, last year, the league average for stolen bases in both the AL and NL was 12. This year, it’s 12 in the AL and 14 in the NL. You know what that means, right? Trending up, baby! Trending up!

All night games tonight, so enjoy your day, get those lineups set for later and don’t forget to tune in to the Fantasy Alarm Show on SiriusXM Fantasy Sports Radio every Monday through Friday 4-6pm ET!