The Daily Bender: May 1

Howard Bender explains why sometimes you have to take off the money-blinders and just have a little fun with MLB DFS. 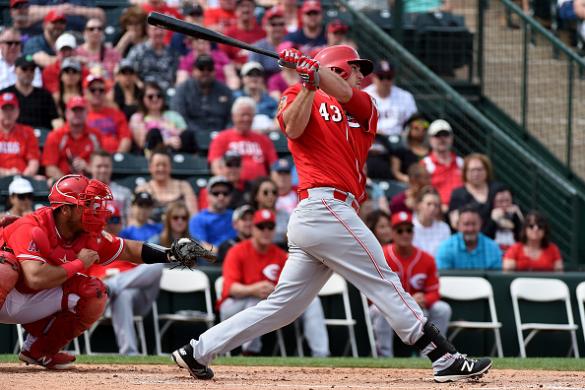 WARNING: There is stronger than usual language used in this article. If you are offended by the almighty F-bomb, do not ready any further.

Listen, I get it. When you play DFS, you play to win money. Some people try to make a living out of while I prefer to make my living researching, writing and talking about it to help you. The advice I offer up, whether it’s here in the pages of Fantasy Alarm or on the air for SiriusXM is, in my opinion, rock solid and just because I don’t like to play for big stakes, doesn’t mean you shouldn’t heed it. To each his own. I still turn a profit, but my $10 a day average doesn’t come close to the stakes some people play.

One of the reasons I don’t like to play for big stakes is because I want my job to remain fun. Yes, if I’m raking in tens of thousands of dollars, I’m sure I’d be having a grand old time, but getting to that point where you don’t mind dropping $300 on an entrance fee means you have a surplus of cash. I don’t. I spend my money on other things. I’d rather pay bills, go on vacation with my wife, get another dog; something to that effect. If I want to stockpile up some money and go have some fun, I’ll go to Vegas and sit in a poker room for a few hours and play. But I play daily fantasy baseball because I need to play for work and if I’m risking hundreds of dollars, at some point it’s going to be less fun.

Why am I sharing this?

Because part of having fun while playing DFS is understanding that sometimes you’re just throwing $3 away. It’s like walking out of the grocery store and buying a scratcher. You have a hunch. A feeling. You buy it for shits and giggles. If you win, then great. If not, it’s no big deal. At some point, the universe is going to point you in that direction for a very good reason.

Today, I got that feeling and felt compelled to act on it. Now in this case, that feeling was based on research and discussion rather than just gut feel, but when you’re throwing a single lineup into a multi-entry GPP and you’re playing against 10,000 people, it might as well be your gut talking louder than your brain. Buy that scratcher, Bender. Just buy it.

So I did. Utilizing one of the two most important lessons the movie Risky Business taught me, “sometimes you just have to say, ‘what the fuck.’ If you can’t say it, you can’t do it. So after the Fantasy Alarm show, I decided to put together a GPP lineup based on all the dumpster diving I was talking about. For the record, no, you don’t sit there and play a bunch of longshot, low-cost options and expect them to all hit, but I did it anyway. I put Clayton Kershaw into my lineup on Draft Kings, played all the dumpster-diving options we discussed and waited to see who I could fit in as my second starter. Lo and behold, I happened to have enough money to throw Luis Severino in there as my second pitcher.

My co-host, Dave Loughran spent a portion of the show talking about how Severino was one of his top four favorites on the night, so I said what the fuck and threw him in there. Dave knows his shit, otherwise he wouldn’t be doing the show with me, so I felt pretty good about my “scratcher.” I had two rock-solid starters and a whole lot of wishful thinking. But you know what? I had fun putting together the lineup and as I sit here and watch the start of the games, I know I’m going to enjoy flipping through each one when it’s one of my guys’ turn at the plate. If it hits, then great. Drinks are on me. If not, I paid $3 to entertain myself for a few hours.

Here's how the rest of the lineup looked, just so you can see how there was, indeed, actual research done and I wasn’t just blindly throwing money away. Or maybe I was. Who cares? I never recommended this strategy to anyone nor would I ever do that. I’m actually more careful with telling you who to spend your money on than I am with mine. Case in point, look at this group of jamokes:

Cameron Rupp, C PHI – The wind is blowing out like a motherfucker in Wrigley today and I needed a punt play behind the dish. Rupp has a .292 average and seven home runs over 161 at-bats against left-handed pitching. If Brett Anderson hangs one in the zone, Rupp is capable of taking him deep.

Josh Bell, 1B – The Pirates are crushing left-handed pitching, Amir Garrett was destroyed in his last outing and Bell has hit safely in four-straight with two home runs and three RBI. Two of those four games were multi-hit performances. Oh yeah, and the game is at Great American Smallpark.

Scooter Gennett, 2B – He doesn’t play every day, but when he is in the lineup, he’s getting on-base. Pirates starter Gerrit Cole has been solid thus far, but grabbing a lefty mini-stack with my new favorite outfielder Scott Schebler in this ballpark had me feeling the Scooter. If you listened to today’s show, you’d understand.

Adonis Garcia, 3B – Not my favorite choice by any means, but I had limited funds left and I was feeling a Robert Gsellman collapse more than I was feeling a big night out of Alex Bregman. OK, so this pick was a throw-away.

Freddy Galvis, SS – This was the tandem to my righty mini-stack against Brett Anderson. Anyone else realize that Freddy’s hit safely in 12-staright games?

Scott Schebler, OF – We were talking about him on the show and discussing that he could very well be this year’s Adam Duvall. He’s not as big a whiff threat, but he’s solid power with a low batting average. He’s also white fucking hot right now with multi-hit performances in five of his last six games and five home runs and 11 RBI in that span. Lefties have a .339 wOBA against Cole and he’s allowed four dingers in 14.2 innings this year.

Jon Jay, OF – I know, right? Jay? He’s atrocious. He was also sitting at a minimum price and facing Vince Velasquez who has been bleeding runs this season. Again, with the wind blowing out at 20 mph at Wrigley, this was worth the risk.

Kyle Schwarber, OF – This was my big-money bat for the day. With Jay batting behind the pitcher, I was able to put together a lefty mini-stack against Velasquez using him and Jay. Schwarber’s been ice-cold lately, so the hope was a potential breakout with an assist from Mother Nature. And let’s face it, the guy definitely has double-dong potential if he’s locked in.

So there you go. My one giant dart throw for the day. I didn’t play any other lineups or games so I could take what the universe was saying to me and focus on it. At first glance of my lineup on DK, it doesn’t look like the universe is going to have me popping bottles at the end of my night, but at least I’m entertaining myself here.

Best of luck to all of you who played tonight and if you heard me on-air touting Schebler and Jay, I hope you hit it real fucking big tonight! Love that money!!!

B. Guyer - RF
SF
Brandon Guyer has announced his retirement.
Guyer, 34, was in camp with the Giants in the spring before being released at the end of March. He now hopes to shift his focus to training athletes. Best known as a lefty-masher, Guyer will walk away with a .250/.339/.388 batting line and 32 homers over 517 major league games between the Rays and Indians.
Added 12:48 pm (EST)
Added 12:48 pm (EST)