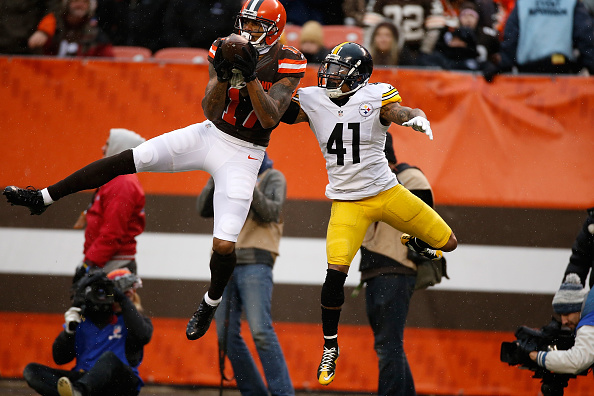 While there still may be a few more drafts left in the Mock Draft Army, this past week might be as far as the ADP goes barring any last minute injuries or other substantial depth chart changes. We’ve seen a little ebb and flow throughout the ranks here but unless something catastrophic happens between now and the first game of the NFL’s Week 1, I don’t anticipate any substantial movement. There. Did I put the jinx on enough for you? We’ll just have to wait and see. In the meantime, here’s a look at the most recent risers, fallers and new faces with a full ADP list to follow.

As always, if you would like your very own copy of the Mock Draft Army ADP on a sortable, color-coded Excel spreadsheet, just send an email to mockdraftarmy@yahoo.com and I will happily send one your way. 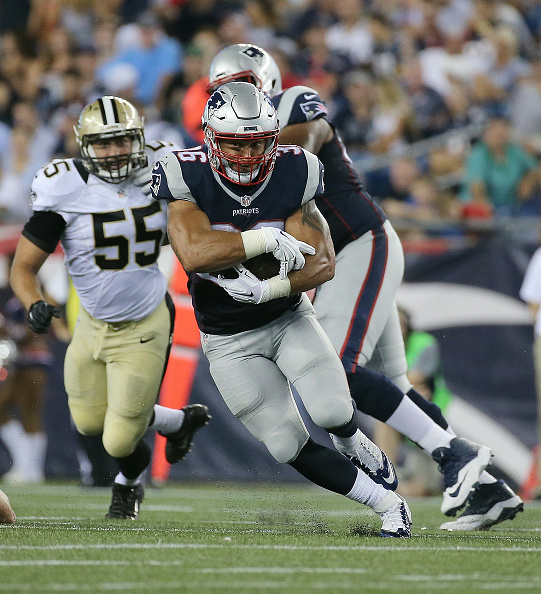 Tyler Gaffney, RB NE (+14.4%) – With Dion Lewis lost for 8-10 weeks (something we’ll discuss in the Fallers sections) the New England backfield is, once again, in turmoil. Not that it was ever stable to begin with, but now the outlook for 2016 is murkier than ever. Gaffney has had a nice showing in the preseason and has been taking first-team reps in practice, but with LeGarrette Blount, James White and even Brandon Bolden in the mix, it’s tough to get too excited about him. His ADP has been steadily on the rise, but if you’re taking him as anything more than a late-round flyer, you’re doing it wrong.

Tajae Sharpe, WR TEN (+14.1%) – The rookie receiver out of UMass has been getting a lot of buzz lately and even in the wake of a concussion concern, the draft love he is seeing is not slowing up. He seems to have the attention of Marcus Mariota and it looks like he’ll be lining up on the outside opposite Rishard Matthews while Kendall Wright works out of the slot. It’s tough to put a world of stock into a rookie on a team that could struggle, but he and Matthews could end up kings of the garbage time this year, much like Allen Robinson and Allen Hurns last season. Similarly to Gaffney though, a late round pick is the only place I will take him. There’s too much talent out there to reach here.

Arian Foster, RB MIA (+13.2%) – It’s as if fantasy owners have completely blocked out the past and are looking at Foster through what can only be described as fantasy beer goggles. He is rapidly climbing up draft boards and is probably going to cost you a fourth or fifth-round pick if you haven’t drafted yet. The problem is that he just isn’t worth that. He’s got the massive injury history, his touches are going to be limited to try and keep him healthy and if you do draft him, you’re going to have to then add both Jay Ajayi and Kenyan Drake because there is still no clear-cut No. 2 in this backfield.

James White, RB NE (+12.8%) – As you might have expected, White is rising up the ranks almost as quickly as Gaffney as he is also taking more first-team reps and is expected to play a significant role in the Patriots rushing attack. But again, with so many other guys in the mix and given what we know about how Bill Belichick likes to mix up his ground personnel, you cannot count on White to be anything more than a mid to late round flex play.

Terrelle Pryor, WR CLE (+11.1%) – Another late-round flyer here and one I am actually starting to get onboard with the more I watch the Browns play. Yes, I hate the Browns and yes, I hate the city of Cleveland. However, fantasy football is business, not personal, so sometimes I have to take off my hate-blinders and open myself up to different possibilities. Hue Jackson has been doing some outstanding things with the Browns and quarterback Robert Griffin III and now that Pryor, a former quarterback, has had more time to learn the wide receiver position at the NFL level, he just might be someone you can look to if you own receivers with a Week 4 bye. Yes, you should expect him to lose targets once Josh Gordon returns, but that return could also prove beneficial as the coverage shifts away from him.

Dion Lewis, RB NE (-51.1%) – As we mentioned above, Lewis is out 8-to-10 weeks after knee surgery and the Mock Draft Army has seemingly left him for dead. Rightfully so, in my opinion. Let’s face it, the backfield is crowded and even if you look for Lewis to return on the short side of the recovery timeline, he’s still going to need an adjustment period getting back into the game. Let him be someone else’s headache. Let some else waste a bench spot by drafting him. You’re smarter than that.

Karlos Williams, RB FA (-22.7%) – He’s suspended for the first four games, fat, stupid and out of a job right now. You are not being savvy by drafting him with the expectation that he will be some monster for you in the second half. You’re wasting a draft pick taking him. The Army has wised up. So should you. 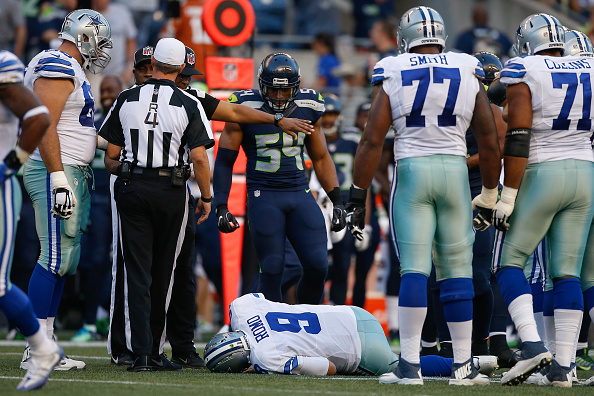 C.J. Prosise, RB SEA (-13.9%) – He went from being everyone’s favorite handcuff to an afterthought as a hamstring injury allowed Christine Michael and, for a little while, Alex Collins to leapfrog him on the depth chart. But while everyone bypasses the rookie, I’m still considering him in the late rounds. Thomas Rawls still isn’t 100-percent, the Collins buzz has subsided on all fronts and Michael is pure garbage. Yeah, that’s right, pure garbage. I’ll get into that more in the New Faces section. Don’t ignore Prosise in the later rounds if you’re looking to stockpile some running back depth.

Javorius Allen, RB BAL (-9.4%) – Everyone’s favorite preseason beast, Terrance West, has really jammed things up in the Ravens backfield and the Mock Draft Army seems to be losing that early head of steam for Allen that they had just a month ago. With Allen, West and Kenneth Dixon hanging out behind Justin Forsett, there are a lot of hungry mouths to feed and there’s no real way to determine which week your guy will eat. He’s a partial handcuff at best right now which means you can leave him be until the end of your draft. 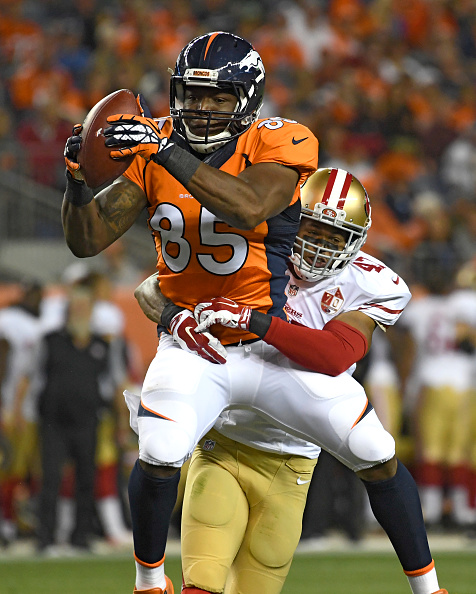 Christine Michael, RB SEA (ADP: 219.9) – You’ve got to be kidding me, people! Just f***in stop already! Remember the hype from last year? What did picking him up then get you? That’s right…ZERO. Since he was drafted by the Seahawks in 2013, he’s been released by them, Dallas, Washington and then again by the Seahawks. I don’t care if he had one good game or two good games, there’s no way in hell he is ever going to be in your starting lineup. If he is, I wish you nothing but the best in your 0-13 season.

Virgil Green, TE DEN (ADP: 228.1) – With the Denver quarterback situation messier than ever, Green seems to be the security blanket for all three of the Broncos’ options. Unfortunately, in any league of 14 teams or fewer, you’re better off looking elsewhere until you see some consistency. Besides, wasn’t he supposed to be some big sleeper last year too?

Mike Gillislee, RB BUF (ADP: 228.9) – He’s making an appearance as the likely handcuff to LeSean McCoy, but in truth, you’re probably better off stealing someone else’s handcuff instead. Gillislee isn’t the worst handcuff in the world, but if he costs you anything more than a second or third to last pick in your draft, you’ve paid too much.

Kenjon Barner, RB PHI (ADP: 231.3) – The quad injury to Wendell Smallwood has opened the door for Barner to get some work as the primary handcuff to the oft-injured Ryan Mathews, but his role is not yet defined. Smallwood is expected to return to the field for this coming week’s preseason game and the two could continue to battle it out over the next week and a half. The only thing we do know is that if when Mathews does get hurt, the job will default to one of them as Darren Sproles is not going to be considered for anything more than his usual third-down role.