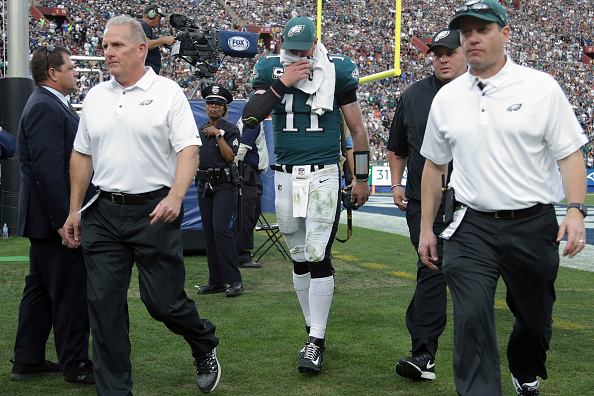 Holy Hot Dogs Week 14 was filled with some wild football. I won’t even call it awful! This 2017 season has been defined by awful football and injuries, but I won’t let week 14 be associated with such a term (keep in mind this intro was written before the Carson Wentz tragedy)! Sure the Bills and Colts played in the 2017 Snow Bowl, and the Packers needed overtime to beat the Browns. But lest we forget that said Snow Bowl showed us the Frank Gore of Old! On Sunday Gore ran… NAY! Gore FOUGHT for 130 yards on 36 carries. At 34 years old he did what Frank Gore does best and grinded out a fantastic stat line at such a ripe age. That’s what week 14 was to me. Sure most of you will remember it for possibly losing your playoff matchup, but this Sunday has been awesome so far (I repeat, this was written before the Wentz injury and I’m not going to edit out my nostalgia because of one man’s injury). Let’s recap, shall we?!

We’re Back to Starting Kareem Hunt

A lot of us rode this guy into the playoffs even though most of the joy ride came early in the season. But he has returned! 116 rushing yards on 25 carries and a touchdown to go with three catches for 22 yards! He’s back! At least for now! Now the tough part is that Hunt faces the Chargers next Saturday, yes I said next Saturday. We have two NFL games on Saturday night, you heard it here first! It’s basically a game for the division title assuming both teams finish off their opponents to end the season (the Chiefs actually might not be able to do that). But lets assume (or pray) the Chiefs stick to this game plan and continue to feed Kareem Hunt down the stretch so those of us loyal to him earlier in the year can bask in the fruits of his labor! Cause if they flounder this opportunity there will be an abundance of sour Hunt owners knowing it’s not his fault. Do not stop the Hunt!

An Apology from the Derek Carr Apologist

If you’re still alive and in line to win your matchup this week despite Derek Carr’s atrocious line, then hats off to you! However, I need to apologize because I was once a believer in Carr. Sure he was dealt an awful hand last week with Cooper and Crabtree both out. But this was supposed to be a “get right” game for the Raiders… And yet they didn’t score a single point until the fourth quarter. And this was against a Chiefs secondary that was notorious for giving up yards through the air all year… The same Chiefs defense that would be without Marcus Peters due to a suspension! And yet… Carr threw for just 211 yards while throwing two picks! According to Seth Walder of ESPN Analytics, Carr posted a Total QBR of 9.7 in today’s game and that’s the third-lowest single-game Total QBR in his career. If you survived this atrocity you can take DISCOMFORT knowing he has Dallas and Philadelphia on the horizon. This may not end well for Carr and the Raiders in 2017. 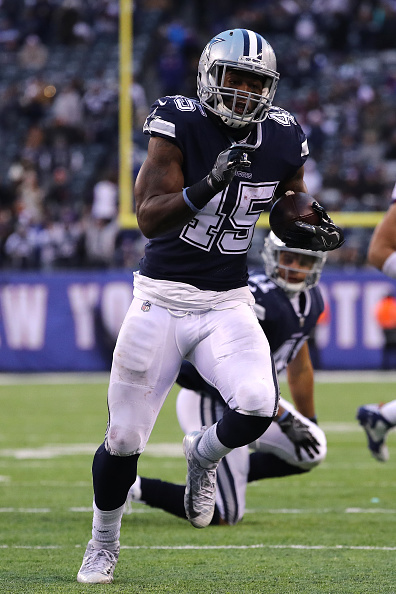 Rollin’ With Rod One More Week

Look was I a bit early to my Rod Smith prediction? Perhaps. I own the prematurity of my call, but I stand by it! He has four touchdowns in his last three games with the monster game coming in week 14. Admittedly I benched him in some lineups, but I actually did start him in two of my playoff lineups where I was the fifth and sixth seed respectively and sure enough his numbers launched me into the next round. Dallas gets a Sunday night matchup next week. Shocking, right? It seems like half of Dallas’s schedule is always in primetime. But enough of the petty bickering, they draw the Raiders next week and I expect another good performance out of Smith against Oakland in week 15. Sure Alfred Morris will be the focal point, but I expect Rod to find the end zone again. They keep finding ways to get this guy involved. Everybody loves rooting for a guy named Rod! (See Rod Tidwell)

Josh Gordon is a Top 15 Wide Receiver Rest of Season

Now I know there are only three weeks remaining, but I love everything Gordon’s been able to do in such a small sample size this year. In his first game back he had 11 targets though he only caught four balls, but for 85 yards. This past Sunday against Green Bay, Gordon caught three of his six targets for 69 yards and a touchdown. His volume is worth considering him a top 20 receiver the next three weeks while his actual big play potential makes him almost elite. Now the Browns have a tough schedule the rest of the way. They’ve got the Ravens at home next week, then finish the season with the Bears and Steelers on the road. That’s a tough test for a guy who has hardly played the past few seasons and is catching passes from a rookie QB. But Gordon is a very special talent that will be fed heavy doses of targets and will have more than enough garbage time to warrant top 15 consideration.

How to Proceed Without Carson Wentz

We finally arrive at what everyone is talking about. Now maybe you magically stashed Aaron Rodgers who could return in the next week or two. He’s been practicing and the Packers are technically still alive in the playoff hunt. But with Tyrod Taylor and Josh McCown (broken hand) likely out for a bit the options on waivers are somewhat thin. But you may be able to get by. Just pray that the rest of your lineup steps up. Jimmy Garoppolo is widely available in a lot of leagues. He faces the Titans at home next week and then the Jaguars at home. My best recommendation is to try and grab both Aaron Rodgers and Jimmy G with the hopes that Rodgers is active in week 16. If not then try and target Blaine Gabbert who has a week 16 matchup against the Giants who just gave up 300+ passing yards to Dak Prescott. Yes you can still win your league if you’ve lost Carson Wentz. Yes it sucks, but Jimmy Grapes in week 15 and Blaine Gabbert in week 16 are an unpopular yet realistic possibility to get a championship. You can also consider Blake Bortles, who gets Houston at home in week 15 and then the 49ers on the road in week 16. Don't panic Carson Wentz owners, you still have hope.

Planning Ahead A Little More

So what’s a way you could potentially plan ahead? Does that mean you get a little cocky and plan for week 16? It doesn’t hurt! Are you in a standard league where you start one quarterback? Or are you in a two-quarterback/superflex league and are tired of carrying a backup on your bench? Well now is the time to rid yourself of waste. Keep the players you know can help you. This seems like the ideal time to drop players you know you won’t start the rest of the year. Now is the time to grab the Bears defense. Right now they’re just 30.3% owned and they’ll be a hot commodity this week on waivers. But hopefully they slip through the cracks in your league where no one notices they play the Browns in week 16, the championship week. If the Browns get picked up then try and take advantage of the Cardinals defensive matchup in week 16. They play the Giants who welcomed back Eli Manning as their starting quarterback and they still only scored ten points! Not to mention the Cardinals defense/special teams is averaging eight fantasy points per game since coming off their bye week. Plus the Giants rank in the bottom five in terms of yards per game and points per game. The Bears and Cardinals can help you win your championship if you can make it that far. 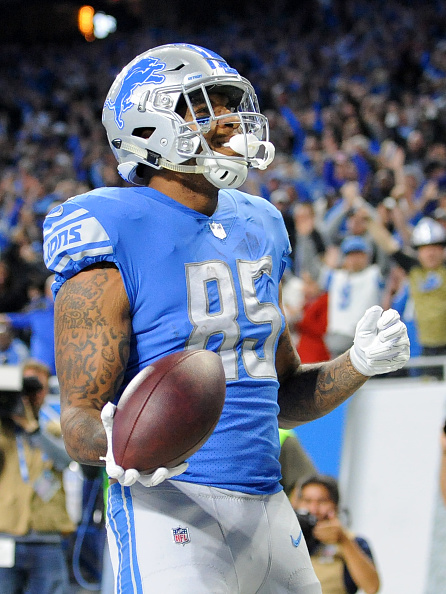 Even heading into this week, Ebron was quietly putting some nice games together for the Lions. Was he getting a ton of looks? Not really, but he made due with what he got. Prior to this game he had three straight games with four catches and at least 30 yards receiving. Drops have been a big concern for Ebron throughout his young career. Keep in mind he’s still only 24 years old and can still get better. On Sunday against Tampa Bay (who typically play tight ends very tough) Ebron hauled in ten of his eleven targets for 94 receiving yards. Ebron still has a tough schedule coming up against the Bears and then the Bengals, but he had a nice showing in a tough matchup that warrants picking up if you’re worried about Ertz not having Wentz the rest of the way. If Ebron isn’t available or you just don’t trust that he’s turning it around then lean towards Vernon Davis who is still the tight end to own in Washington with Jordan Reed out.

Harrison Butker could be a nice addition after coming off a nice outing against the Raiders. But keep in mind he faces the Chargers next week. Since coming off their bye week the Chargers have given up just four field goal attempts over their last five games. So while Butker may be a popular addition I believe a sneaky pickup could be Zane Gonzalez of the Browns. Zane’s available in pretty much every league so you should have no trouble picking him up. And you don’t need to pick him up this week, you can grab him next week once you move on. The Bears have given up double-digit points to kickers in seven games this year and two additional games where opposing kickers had eight points. Yes they shut down the Bengals offense in general this week, but if the Browns can move the ball with Josh Gordon back in the offense perhaps they can set up Gonzalez for a few attempts that could lead to seven or eight points. Another player worth owning is Kai Forbath. Forbath draws the Bengals and Packers over the next two weeks and both those teams have been friendly to kickers. Kickers are tough to read, but if you can find a good one in a matchup where you can project his team to move the ball successfully then you may find a kicker than can help you win.

Don’t forget to cheer for my Fantasy Football Evolution team! I face an uphill battle in my Sweet 16 matchup and need all the good vibes I can get! Feel free to give me a follow on Twitter (@RealDANlanta) and throw Twitter tomatoes my way for some of my takes that go awry. Thanks for reading! Stay strong the rest of the way!