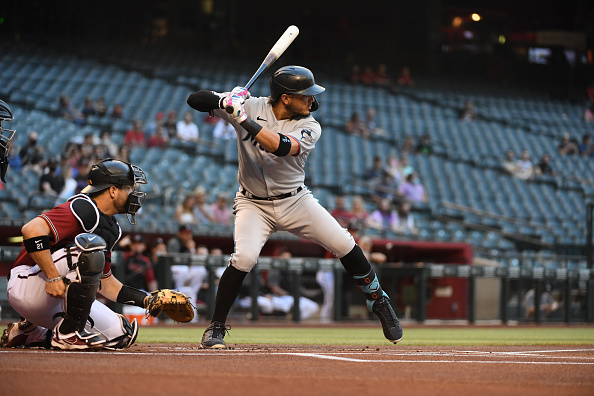 Andrew Vaughn (CHW) FAAB Bid: 10-13% - Remember earlier in the year when everybody was clamoring for Vaughn to get more playing and Tony La Russa was still a stubborn SOB and playing veterans over the young, exciting players? Well injuries paved the way to more playing time for Vaughn so that alone should pique your interest. This is mostly an upside waiver grab as the batting average is nothing to write home about, but he’s been flashing a little more power since last week with a pair of home runs and doubles.

Miguel Rojas (MIA) FAAB Bid: 6-7% - Here’s a good replacement for Corey Seager in shallower leagues if you’re currently exploring your options. Rojas is a strong roto/category add in shallower leagues but he won’t be the only shortstop mentioned today. He entered Sunday tied for tenth in all of baseball in runs scored with 27 and despite just two home runs on the year he does have a dozen doubles and a pair of triples. So he isn’t ripping it out of the park, but he’s still generating power in other ways. He hasn’t attempted a stolen base in almost a month, but remember he is leading off and hitting for extra bases. He also doesn’t strike out all that much so he’s serviceable in points formats as well.

Brandon Crawford (SF) FAAB Bid: 6-7% - If you’re looking for a replacement for Corey Seager in deeper leagues, Crawford saw his ownership spike a bit from Saturday-to-Sunday. He’s already passed his home run total from 2020’s truncated season and he’s boasting a career best .529 slugging percentage. Do I expect that to hold? Now. His hard-hit percentage is way down and the fly ball rate is up. But he’s also still scoring runs and while I do think the power regresses to a mean that doesn’t mean he can’t have his first 20-home run season since 2015. If you need to look deeper than Rojas and Crawford, some other replacements for Seager include Starlin Castro (Jen Piacenti made quite the argument for Castro on Twitter over the weekend), Jorge Polanco (shallow leagues only), Nico Hoener, and maybe Kyle Farmer .

Robbie Grossman (DET) FAAB Bid: 3-4% - Grossman’s currently riding a seven-game hitting streak with seven extra base hits over that span. He’s kind of doing it all from the leadoff spot for the Tigers. Similar to Rojas, lately he’s been hitting enough extra base hits where he hasn’t needed to steal bases. But keep in mind he’s a perfect 7-for-7 on stolen base attempts and he’s scoring runs at an elevated clip lately.

Taijuan Walker (NYM) FAAB Bid: 7-8% - Walker might be my favorite pitcher to add this week simply based off the amount of innings he’s eaten of late. He has three wins in his last four starts working a total of 27 innings in that span with only 20 strikeouts, but he’s minimized damage and even in a points format he’ll return some decent value in the amount of innings he can work. Walker is a two-start pitcher next week against the Atlanta Braves and the Miami Marlins. The Braves, for all their firepower, haven’t been hitting that well aside from Ronald Acuña Jr. , who has been dealing with an ankle injury recently. The strikeouts aren’t as abundant but he’s one of the best waiver wire pitchers to grab if he records a pair of quality starts this week.

Logan Gilbert (SEA) FAAB Bid: 5-6% - It wasn’t a great debut for Gilbert by any means. But his repertoire was solid. He gets another start in the upcoming week against Detroit and then he faces the Athletics the following week. Given the nature of Seattle’s rotation he’ll rarely be a two-start pitcher, but he’s a high strikeout upside type of pitcher with a good matchup this week. Again, he’s young and they’re monitoring his workload, but he might be able to pitch deep enough to get a win if there’s run support. His teammate Yusei Kikuchi is also worth looking at as well. I left him out for the sake of not mentioning the same Mariners pitchers to grab this week.

Adbert Alzolay (CHC) FAAB Bid: 4% - There are so many streaming options I considered for next week. I looked at Robbie Ray , and even considered Luis García. But I wasn’t a fan of the home runs they allow. That’s not to say Alzolay isn’t immune, he’s allowed at least two earned runs in each of his six starts on the year and has a 1.69 HR/9. But Alzolay at least gets two starts in the coming week. He has 36 strikeouts and just seven walks in 32 innings of work. His 4.50 ERA could be due for positive migration compared to his 4.15 FIP and 3.39 xFIP. He gets two starts this coming week against Washington and St. Louis.

Rich Hill (TB) FAAB Bid: 4% - After allowing 18 earned runs in his first 22.1 innings of work this year, Hill has bounced back with zero earned runs, 17 strikeouts, six walks and six hits allowed over his last 15.2 innings of work. Hill is currently slated for just one start next week, but it comes against Baltimore and then he’s lined up for two starts the following week against Toronto and Philadelphia. And even after that, the following week he should avoid the Yankees and get a start against the Rangers. So as long as he stays healthy and can avoid those blisters he tends to develop, he’s a pretty strong add for the next two-to-three weeks of the season.

Jordan Romano (TOR) FAAB Bid: 6% - We’re still looking for short-term relief help and we should be looking at this bullpen. Romano’s been getting work in high leverage situations. He worked the ninth inning in a non-save situation on Saturday and came in for extended work in the eighth inning on Sunday and got the hold. He allowed an earned run but if he was working a cleaner outing he likely would’ve finished the ninth. But he was working back-to-back days so I’m not inclined to hold it against him.

Michael Fulmer (DET) FAAB Bid: 3-4% - Since moving to the bullpen, Fulmer has worked seven innings since May 5th with two wins, two saves, seven strikeouts, and just one walk. He’s had to re-invent himself after plenty of injuries derailed his once promising career and the move to the bullpen for high leverage work has paid off so far. He’s mostly a two-pitch pitcher now while his fastball still carries plenty of velocity. If he starts getting more save opportunities, we’re looking at a nice value on waivers until the Tigers potentially deal him to a contender. Again, that depends on this experiment working out over the next couple months, but Fulmer’s ownership could spike early in the coming week.