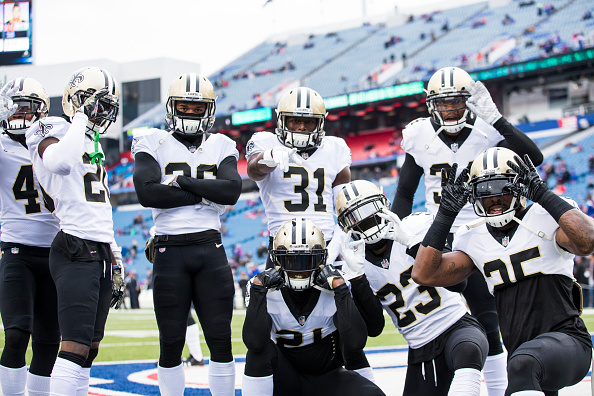 The 2017 NFL season just continues to outdo itself week after week. And I mean that in a bad way, I really do. This is just an awful year. The Buffalo Bills benched Tyrod Taylor while they’re in the playoff hunt for an unproven rookie quarterback named Nathan Peterman. And I’m sure young Peterman is a swell lad. He probably comes from a nice family and has a stupendous work ethic, but all that doesn’t change the fact that he threw FIVE interceptions in the first half (to be fair you can make the argument that two weren't really his fault). Tyrod Taylor has THREE interceptions ALL YEAR!!! It’s just insanity. It made no sense. Now Peterman’s day was salvaged by his four rushing yards…. Okay that was a joke. His day wasn’t salvaged at all. If you started Peterman in fantasy I wish I could say I felt bad for you. I guess I’ll feel bad for you if you play in a 16-team AFC only league in which case, you had to start him. But holy moly this was bad. And I hate to say I told you so, but I told you so about Keenan Allen. He exploded on Sunday for an absolute monster performance. At least one of my takes from last week was on. My biggest critics will say “Well what about Martavis Bryant? You’ve been wrong about him ALL YEAR?!” And to that I say… I haven’t been wrong… I just haven’t been entirely “right.” On to the takes!

We Just Can’t Have Nice Things

This isn’t so much a hot take as it is another “in memoriam.” We’ve been spoiled in the past. We were able to enjoy the spoils of picking up Odell Beckham Jr. and Josh Gordon off waivers during their legendary campaigns. In 2015 we were able to grab Tim Hightower off waivers so he could help us win a fantasy championship that year. But this year we are without too many superstars. And it’s not even that, but we can’t even enjoy Chris Thompson anymore. And that was one of the “feel good” stories of the year. Not a great RUNNING back by any means, but he was incredibly valuable as a pass-catching running back. But Thompson, who had previously torn his ACL, fractured his fibula on Sunday. And that’s a pretty big blow to the Redskins. Oddly enough Washington couldn’t recover after he went out. They blew a double-digit lead in the fourth quarter and lost the game in overtime without Thompson. Is nothing sacred in fantasy football? We expect to lose a couple players each year to injury. But not even Chris Thompson, a PPR commodity and a DFS wizard could be spared. 2017 sucks. We. Deserve. Better. 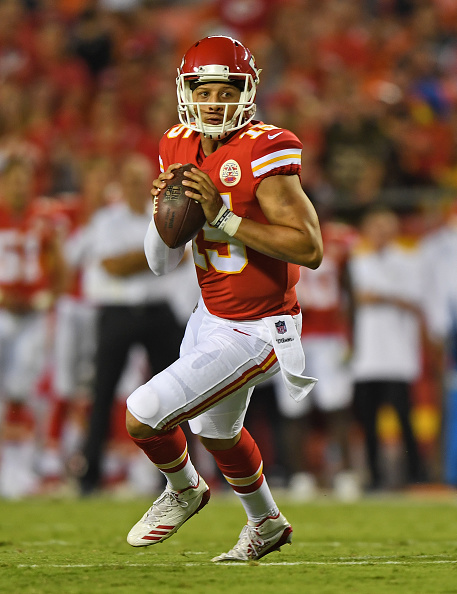 Whoa! There’s a hot take if there ever was one! If the Buffalo Bills were running the Kansas City Chiefs they would’ve made this movie after losing to the Steelers over a month ago. But seriously let’s discuss this. The Chiefs are 1-4 in their last five games. Sure I am 100% behind the belief that the Chiefs are misusing Kareem Hunt, but the passing game is off. Alex Smith threw 11 touchdowns with no interceptions when the Chiefs started 5-0. During the 1-4 streak he has thrown just seven touchdowns with three interceptions (all of which have come in the last two games). Again I believe the Chiefs could be more successful if they used Kareem Hunt in the passing game more. But Andy Reid tried getting too cute on Sunday, highlighted by a play where Travis Kelce threw an interception deep to the Giants. You read that right. Ironicially enough, if the Chiefs lose to the Bills next weekend I believe this big QB shakeup (inspired by said Bills) should be in order for the Chiefs. Mahomes has the mobility and the arm to be a legitimate NFL quarterback. For whatever reason the Chiefs tried airing it out too much in 20+ mph winds. Whatever the reason, I believe Mahomes is the starting QB next year. I know all this talk contradicts my feelings for the Tyrod Taylor benching, but Mahomes was a top 10 pick in last year’s draft. The Chiefs liked him enough to take him in the first round. If the Chiefs struggle in another game and there are whispers of a change I'm adding Mahomes wherever I can as fast as I can. They shouldn’t hesitate to move on from the Ultra Vanilla Alex Smith in my opinion. Take my advice KC (hahaha they’re not reading this), start the transition now!

That’s a very long sub-headline, but I genuinely believe this. Obviously Perine is a strong candidate to finish in the top 20 at running back with Thompson now done for the year and Rob Kelley on IR. But he finally had 20+ carries on Sunday. He hadn’t had that since week two when he averaged just a little over three yards per carry. But fantasy players love a bell cow. They love a guy who is the clear cut RB1 in an offense who will get more than 65% of the workload at his position. And Perine is in line for just that.

For Doctson, however, you hope this is finally the push the Redskins needed to promote him and use him more. He’s seen seven targets in each of his last two games with four catches in each contest.  Hopefully the lack of depth in the backfield opens the door more targets to the actual receivers. Doctson is a former first-round pick and has proven to be able to bring in those 50/50 passes when targeted.  Jamison Crowder and Ryan Grant are also in play in the passing game, but Doctson is a big 6’4” target that Kirk Cousins can target with Jordan Reed unable to stay on the field.

Just try reading that in a Ron Burgundy voice and you’ll laugh a bit. But if you’re absolutely desperate for a quarterback then go grab Gabbert in 2-QB or superflex leagues. Hell, Gabbert’s even in play on DFS cause he’s so cheap. Drew Stanton has done well in his recovery process and he was even active today, but the problem is that Gabbert is just better.  He went 22-for-34 for 257 yards with three touchdowns although he did throw two interceptions. Obviously you’d prefer less turnovers, but Stanton’s only completed 48.4% of his pass attempts in his small sample on the year. With Aaron Rodgers done, Deshaun Watson done, Tyrod Taylor benched (but possibly starting next week), Jay Cutler maybe never to be seen again… Perhaps you could do worse than pick up Blaine Gabbert. He also managed to put up almost 20 points this week. You could certainly do worse (*cough* Nathan Peterman *cough*), but Gabbert is in play if you’re absolutely desperate.

The Saints Defense is LOST Without Marshon Lattimore

Talk about a second take from last week’s piece that just looks horrendous. Last week I told you all to buy Taylor, then he got benched. Then I touted how awesome the Saints DST was and then they really got burned by Washington. Lattimore left Sunday’s game against the Redskins with an ankle injury on a play he made to prevent Washington from scoring on a deep play. It was an impressive effort. It was the kind of play the Saints have come to expect from their defensive rookie of the year candidate. Unfortunately he landed awkwardly on his ankle and didn’t return. With Lattimore out, Kirk Cousins totaled 322 passing yards on just 32 attempts. He didn’t throw an interception and he had three touchdowns. The Saints still won the game, but it was the first game where they allowed more than 18 points in over a month. Aside from the points New Orleans gave up more than 450 total yards of offense to Washington. The Saints, with Lattimore’s help, hadn’t allowed a quarterback to throw for over 165 yards in each of their last four games. Granted these games came against Bretty Hundley, Mitchell Trubisky, Ryan Fitzpatrick, and Tyrod Taylor. None of those guys are on the level of Kirk Cousins in terms of passing. But Lattimore still makes a significant difference. He can take away half the field and be the shutdown defensive back the Saints have longed for. This could be trouble for New Orleans if Lattimore does have to miss time. They face the Rams, Panthers, Falcons (twice), and the Jets over their next five games. If Lattimore has to miss any time it could be a return to the Stone Age for New Orleans. 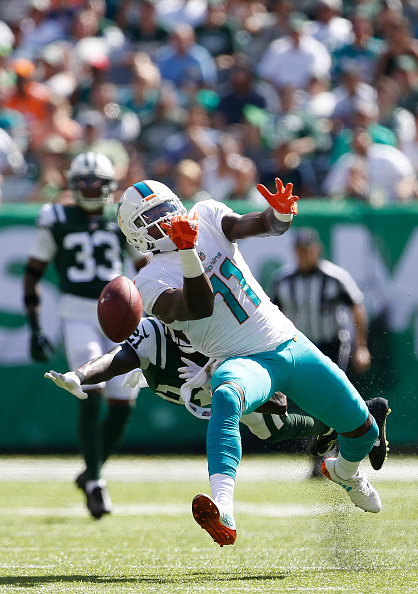 This one hurts. I’m a big advocate of Parker. Whether it’s on the FA Forums or when I’m answering Twitter questions for Fantasy Alarm on Saturdays and Sundays, I’m always telling people to start this guy. To be fair to him his volume is solid. He’s had 26 targets in his last three games. Unfortunately that’s only translated to 15 catches for 168 yards over that span. Perfectly fine in PPR as a WR2/Flex option. But he hasn’t found the end zone since Miami’s second game of the season and even that one was a score in garbage time. The effort is there to get Parker the ball. He was targeted in the end zone (and red zone for that matter), but the execution just isn’t there. Jay Cutler is a better fit for Parker due to his ability to get the ball down the field, but if Cutler can’t go then Matt Moore steps in and that’ll limit Parker’s big play potential. Should you be dropping Parker? No, not by any means. But for now you have to stash him on your bench or maybe you can move him in your league before the trade deadline. His upside is great, but he just doesn’t have a QB right now that can get him the ball.

Rod Smith Can Help You Make the Playoffs

Currently this last section is being written with the Cowboys up 3-0 to start the game and the Cowboys benefitted from great field position to start the game. But the Cowboys biggest problem right now isn’t that they’re without Ezekiel Elliott. It’s that Tyron Smith is out for Dallas. Whoever the Cowboys find to replace him will need help. So far the Cowboys have lined up Jason Witten to assist in covering Dak’s blindside. Now if the Cowboys get desperate (which is possible) and fall behind in games (as evidenced by last week’s outing) then there’s the game script that requires them to throw the ball more. And in steps Rod Smith. He led Dallas in snaps last week when the Cowboys were getting demolished by Atlanta. The same could happen in tonight’s game against Philly. This trend could continue as they face competitive battles against the Chargers, Redskins, Giants (haha), Raiders, and Seahawks. Zeke might be back in time for the Seattle game. Hence why I said Rod Smith could help you make the playoffs, but he could be cut out of the offense once Elliott comes back so he might not help you in the finals. But it does depend on Tyron Smith as well. His involvement will keep the offense on the field and in play to put up points. Dallas will need to fall behind a little bit for Rod to get involved.

Update at 2:32am: Rod Smith had virtually NO impact on this game even with the Cowboys getting crushed. Yeesh! Tune in next week to see what hot takes I can butcher! Side note: Not even Dak Prescott is immune to the offensive line woes. In his last two games he has totaled just 321 passing yards with six turnovers. Is this proof that Tyron Smith is the league's MVP?

Feel free to give me a follow on Twitter (@RealDANlanta) and throw Twitter tomatoes my way for some of my takes that go awry. Thanks for reading! Stay strong the rest of the way!